Hate piano practice? Dr. Seuss' oddity is for you

There have been many attempts to make live-action cartoons – some successful (Who Framed Roger Rabbit?), some less so (Cool World) and some inept (Space Jam). Yet the The 5,000 Fingers of Dr. T should be credited for so fully bringing the flexible logic of animation to life. 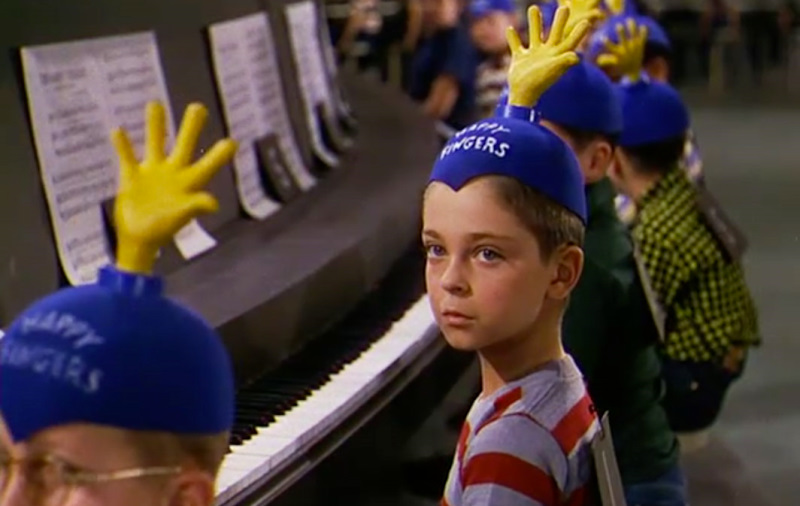 Bart Collins (Tommy Rettig) is just 10 of The 5,000 Fingers of Dr. T in the gloriously madcap fantasy from Dr. Seuss.

A hugely ambitious first (and last) entry into live-action cinema by Theodor Geisel (yup, Dr. Seuss), his 1953 fantasy came at the end of the era when it was OK for a kids’ movie to be one long dream sequence, top and tailed with real life. The dreamer this time is young Bart Collins (Thomas Rettig): He's reluctantly taking piano lessons from Dr. Terwilliker (veteran character actor Hans Conried), demanded by his mother Heloise (Mary Healy).

Absent a father figure, he’s become firm friends with local plumber August Zabladowski (Healy’s real life husband Peter Lind Hayes), who is convinced that Terwilliker is running a scam on unsuspecting parents like Heloise. Then Bart falls asleep midpractice and drifts into a dream world in which Dr. T is a deranged dictator who hypnotized his mother, and has August installing plumbing to enable his master plan that involves enslaving kids to … play the greatest piano recital ever!

This child-friendly political allegory about oppression was a box office and critical catastrophe at the time. Yet its astounding design and vague sense of age-appropriate menace have withstood constant critical reappraisal, and become quietly influential.

In fact, the pacing and charmingly sardonic tone are years ahead of animation: it took Chuck Jones until the early Sixties to embrace Surrealism and German Expressionism so fully, in "Duck Amuck" and "Duck Dodgers in the 24½th Century." It even raises an interesting question of who influenced who: After all, Jones' longtime lay-out artist Maurce Noble served under Geisel during World War II in the Army Signal Corps, designing the Private Snafu comic series, and the pair reunited in 1966 for "How the Grinch Stole Christmas!" and the Seuss animated specials that followed.

The director credit may say Roy Rowland, but this is pure Seuss, from the off-kilter designs to the heartfelt sense of optimism. Yet what it catches most is his incredible ability to build a ridiculous, curious, illogical, and yet totally engrossing world. There are ladders to nowhere, strange and beastly statues, and hordes of bumptious thugs that bounce like rubber balls.

Most Seussian of all may be the dungeon into which the keyboard-obsessed doctor throws those musicians who dare to perform on other instruments. Their massive dance routine (one of several impressive musical numbers from the Oscar-nominated score) finds humor in the same Technicolor hallucination from which The Red Shoes drew metaphysical terror.

The most gloriously bombastic component in this weird machine is Conried as the strangest evil genius ever. His mad plan to have 500 children playing at the same time on a custom-made, cathedral-sized piano is ultimately derailed by a plan that isn’t just atomic but, as Bart warns him, “very atomic.” Ah the Fifties, how innocent. Suitably, it's a performance that let's generously say may have "inspired" Jonathan Harris as Dr. Zachary Smith in Lost in Space: camp, crowing, preposterous, and yet suitably menacing for a kids' story.

The 5,000 Fingers of Dr. T (Mill Creek Entertainment) is out on Blu-ray now. Also out now: Speaking of mad doctors: Everyone has their favorite Hannibal Lecter. Anthony Hopkins scored an Oscar for his version, Gaspard Ulliel got shortchanged with the script for his young Lecter, and Mads Mikkelsen got an unprecedented opportunity to delve deep into the psyche of everyone’s favorite cerebral cannibal. But (and this is purely a personal preference) there is an undefinable, visceral menace of Brian Cox in Michael Mann’s Manhunter (Shout! Factory) that stands above them all.

The first time we see Lecter, he is already a caged animal, having been captured by FBI profiler Will Graham (wonder why William Petersen was handed the lead in CSI? His sense of enthralled detachment, displayed here). But he’s not the protagonist here, but an evil enabler to the Tooth Fairy (Tom Noonan), the next serial killer that Graham has been charged with finding.

Adapted and re-titled from Thomas Harris' Red Dragon (which, as Petersen explains, everyone feared would sound too much like a karate movie), this is the first time his most famous creation had hit the screen, and Cox plays Lecter far straighter than anyone else that takes a pass.

That makes sense, because Mann (who cut his teeth in cop shows) plays this as a police procedural and psychological drama, rather than the increasingly ludicrous horror of the Hopkins franchise. It’s Graham paying the cost of knowing he can get into the mind of a monster like the Tooth Fairy, while the audience gets disturbingly close to Noonan’s calm insanity.

It’s also Mann at his most visually stylized (shown here in both the original theatrical cut and a restored but marginally different director's cut). Rebounding from the horribly underrated and studio-mangled The Keep, it came as he was rewriting the visual language of TV in Miami Vice. Here, his collaboration with cinematographer Dante Spinotti takes color coding in scenes to a new level. The short extra included here with the lensman explaining their methodology is unmissable, as is the astounding scene with Noonan, Joan Allen (as his blind workmate, Reba), and a sedated tiger.