On Set With Virgin Cheerleaders in Chains

Mid-afternoon at the first location for Virgin Cheerleaders in Chains, and before the cast and crew can get on-set, they have to step over the pile of mud-encrusted boots at the door. An overnight deluge at the wooden cabin in Round Rock has turned the driveway into a quagmire. But, hey, no one said indie filmmaking is glamorous. 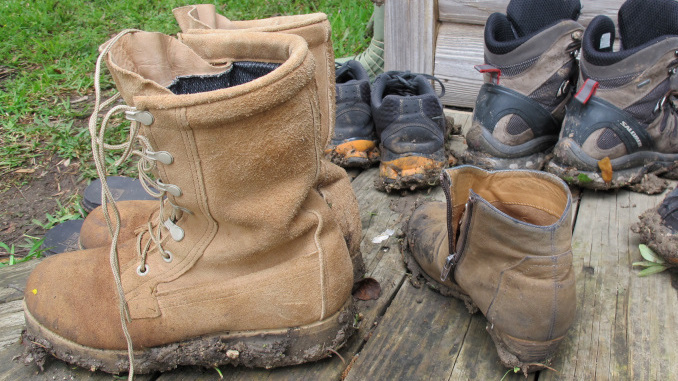 It ain't all wine and roses: on set for Virgin Cheerleaders in Chains. (Photo by Richard Whittaker)

It's also not the cinematic debut one might expect for Gary Gannaway, a retired adjunct professor in Austin Community College's English as a Second Language program. He might not seem the most likely author of a gore-heavy meta-horror: but then he had an unexpected inspiration, in what Gareth Edwards said about making Monsters, his DIY critical phenomenon that turned him in to an A-List director: “He had done a lot of computer work, and commercials, and he said, ‘I just realized Hollywood was never going to call.’”

Gannaway had written scripts before, but his path to horror movie making really began when he entered semi-retirement in 2012. That year, he had a script in competition at the NoLA Horror Film Fest, The Creature From Blood Canal. It was where he met Paulo Biscaia Filho who, along with Rodrigo Aragão (Chupacabras, Dark Sea), is part of the new wave of Brazilian horror directors. His film Nervo Craniano Zero was in competition at NoLa and, Gannaway said, "When I met Paulo, there was something there that clicked between us."

Meeting Filho was the good news that year for Gannaway. The bad news was that Blood Canal didn't win, and he couldn't get any interest from studios. He said, “I wrote a mega-mega budget sci-fi movie, and I realized I’m not repped, so I couldn’t get anyone to read it.” However, hanging around horror conventions, he picked up some wisdom: “If you want anyone to make that script, then write a low budget horror movie, and either sell it or make it yourself. So I wrote a movie about a guy who can’t get a mega-mega-budget movie made, so he makes a low-budget horror movie”

So in 2013, Gannaway was back in NoLa with that script: Virgin Cheerleaders in Chains, a meta-horror about filmmakers who find themselves on the set of their own slasher ordeal. This time he won the award for best screenplay, and that gave the writer a reason to contact Filho. Calling Gannaway "the grand master criminal behind this project," Filho found himself drawn to the story. He said, “It’s about independent filmmaking, and I’ve done my films with very low budgets, and he knew that.”

For Gannaway, Filho was always his top choice for a collaborator. He said, “My script is weird enough that it can easily be misunderstood, and he just got it. He’s the guy. He’s the one that can bring it to the screen.”

However, while Gannaway loved his films, Filho didn’t start off behind the lens, but on the stage. A graduate of London’s Royal Holloway University, when Filho returned to his native city of Curitiba after college he founded Vigor Mortis, a theatre company dedicated to reviving the great French tradition of Grand Guignol. In 2004, they had a breakout success with their play Morgue Story: Blood, Blowfish, and Comics. Filho said, “We went all over Brazil, and people kept telling me that I should make a movie out of that. I didn’t think it was a good idea, but the company did, and they got a city hall grant, and we got the movie made, very much like the play. It played very well in festivals worldwide, much to my surprise.”

The idea of working with an Austin production, even if remotely from Brazil, appealed to Filho, and resonated with his own experiences. The mainstream Brazilian film industry is based in Rio de Janeiro and São Paulo, while the indie directors who are pushing boundaries are in the smaller cities and outlying regions like Curitiba. He said that it would make sense for him to find a kinship with the Third Coast, “not New York or Los Angeles.”

So now Gannaway and Filho, literal continents apart, are working on what the scripter called "a truly international production," melding Filho's Vigor Mortis shingle with his own Big House Productions, with scenes being filmed in both the US and Brazil. It may sound complicated, said Gannaway, "but there is Skype."

Much as Hannah Smith and Selen Flores found ways to collaborate virtually on their transatlantic short "Margot" (see Two Americans in Paris, Jan. 29), the Brazilian and American teams have developed their own workflow. For example, Gannaway and his team took over location scouting in Austin and found both the characters’ house (the Round Rock cabin) and the murder scene in Manor. They also handled the first round of casting, but then Filho did callbacks and first rehearsals by video chat.

That didn’t allow for the intense workshopping that Filho was used to from his theatrical days, but it still gave space for some character development. For example, he and veteran actor/stuntman Gary Kent used Orson Welles in Touch of Evil as the model for creepy Uncle Albert. Filho said, “[Kent] said, 'Well, if Uncle Albert was an animal, what animal would he be?' Well, Orson Welles in Touch of Evil is a walrus. There’s no other choice.”

Production will continue in both the US and Brazil all through the summer, but the team has already put a teaser trailer together. So here's your first look at Virgin Cheerleaders in Chains.