Saying goodbye to The Good Wife

It’s sort of unprecedented that a low-rated, highly acclaimed prestige drama would ever have made it to seven years on a broadcast station, particularly CBS. 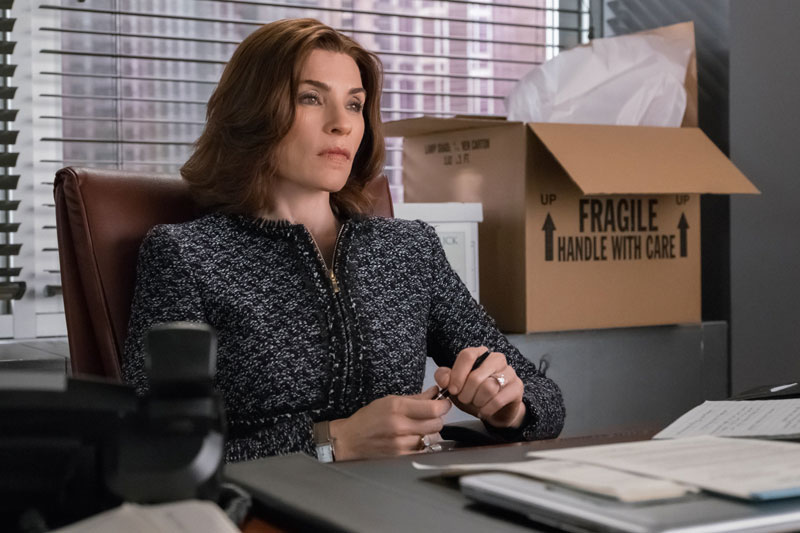 After several night changes over the course of its run and – more importantly – the bizarrely variable, Tivo-busting airtime schedule that meant the week’s 8pm episode could often begin anywhere from 8:09 to 11:33pm, on the network with the most backward Internet and streaming presence imaginable, the fact that anyone who could be said to have “watched” The Good Wife over its course only got there with dedication and often technical know-how.

But we did. It feels not so much like a badge of honor as it does a sort of seven-year gauntlet, dealing with highs and lows both emotional and qualitative. We followed a quiet but insistent buzz reminiscent of nothing so much as that surrounding early-days Friday Night Lights, or came out in allegiance to Julianna Margulies, or in my case, Rory Gilmore’s only half-decent boyfriend, who’d been played by Matt Czuchry. Many, I’d imagine, were turned by the reverential light in fans’ eyes when they would talk about Archie Panjabi’s Kalinda.

And if you fought through the title – after loving and then swiftly mourning GCB, Don’t Trust the B, Trophy Wife and the rest of the ephemeral, wonderful, ill-named non-hits of the Aughts – and fought through the CBS web of technical incompetence and ambivalent support of their technically flagship show – under-the-wire negotiations and renewals every year, that ever-changing day and time – you were presented with wonders immediately.

The show’s formal experimentation, which succeeded more often than it failed, opened the door to even more ambitious, brilliant current shows like Mom and Limitless. It redefined the rules of scripted drama by rewriting them, always with one foot on the floor. I remember one of the first things that really got me interested in the show, already near the end of its first season when I finally and begrudgingly (and secretly!) got onboard, was an interview with the married team behind the show, Michelle and Robert King, describing it as a game between themselves and the network to see just how much of each episode’s required legal-procedural aspect they could ignore, without really acting in bad faith.

That’s the sort of people I want making my television: savvy enough to play the game and win, but with the integrity to then talk about the game, and how dumb it is.

But then, that’s also the show they made. Remember Weeds’ Nancy Botwin? An inscrutable femme fatale whose internal life and motivations and vulnerabilities only revealed themselves in the finely tuned subtleties of Mary-Louise Parker’s silence. She was an antihero – it was the age of a certain kind of antihero, remember, the sort that started with Tony Soprano and ended with Walter White, roughly – but one whose dark humor could get us through anything, even her worst days.

While the true story of The Good Wife is similarly written in the silences, sudden outbursts, and growing dissatisfaction of its heroine Alicia Florrick, she never gave that same sense of unknowability, and that’s probably the most revolutionary thing about the show. She is fully lived, fully realized, complicated but extremely relatable; an intensely basic woman and an absolutely weird one at the same time. Just like the rest of us.

The creators have described the show more than once as “The Education of Alicia Florrick,” and it has felt cynical on occasion. Without the protection (or alibi) of being a politician’s wife, Alicia would have to get her hands dirty.

And while that’s the case, it was never an indictment of her passivity or her laziness. It was always about her desire to get her hands dirty, to prove herself to herself, to avoid the accusing and narrative-impressing gaze of the outside world, and break free from her own bubble just long enough to turn around and get a good look at who, and what, she was. To love the whole of herself.

I can’t imagine a better education, or a harder one, for anyone. We would all like to think that we are clean, and that any part of us that’s dirty is either someone else’s fault or someone else’s mistake. Watching Alicia balance and transcend these opposites has been a process which, in a show littered with missteps (if only, in this case of a modern classic that will still hold up decades from now; if only in the sense that the perfect is the enemy of the good), has never once wavered or stumbled. 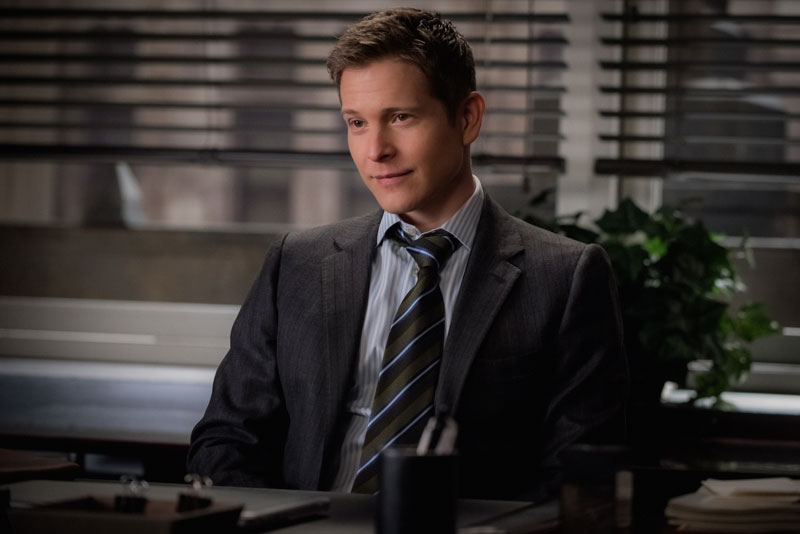 Rather than serving as “Saint Alicia,” the foil to her husband, or the object of fascination and utter admiration from hilariously sleazy serial killer Colin Sweeney, Alicia does the work of dividing the indivisible, her darkness from her light, so that she can figure out the perfect combination and burn off what’s left. Rather than lending genteel quietness to her young rival and often best friend Cary Agos, the actual and beautiful embodiment of white privilege, she allows herself also to learn from him. Rather than sitting out the nastiness of politics, she engages so she will know whether or not she is also nasty. Again and again, Alicia hurls herself against the very nature of her persona, not by acting out or doing the unexpected, but staring it down in the mirror and figuring out how to incorporate it.

It’s rare that a show would hit its creative peak in the fifth season, especially with the artistic masterpiece comprising the first two years of the show. But that’s exactly what it did. Every five episodes, by design, the entire show would pivot into a new and more dangerous, or interesting, or heartbreaking form. Nothing remotely like that has ever been on television, and while the latter third of the season and most of the sixth didn’t compare, there’s a solid chance they simply couldn’t.

But I think by then the brilliance, overall, is something we’d just gotten used to. The most talked-about twist in the series, the shocking death of a regular midway through season 5, is revisited and explained on both the emotional and, in a real sense, literary frequency. After the panicked and destructive meltdown of a client whose guilt we were never quite sure of led to the death of his attorney, season 6 finds lookalike Cary Agos in jail for similarly dubious crimes, growing more and more desperate, and with the whole cast working in his favor we begin to see, and feel, for weeks and weeks, exactly what would have driven that young man who murdered our favorite character – we learn to see just how far the darkness could go, when you’re accused of something you have not done. And I think, though it’s never something Alicia verbalizes, that being on the other end of that gun was a way for her to move past the unspeakable tragedy.

For some reason that has always struck me, playing us the way the show’s world plays Alicia. By giving her a monster, indulging herself in her superiority to that monster, and then eventually coming – not to respect the monster necessarily – to a way in which that relationship unlocks a greater respect for herself and for her decisions. In the corporate and legal world, and the world of politics, I believe we can only be saved by recognizing our own complicity and connection to, our identification with, the monster. 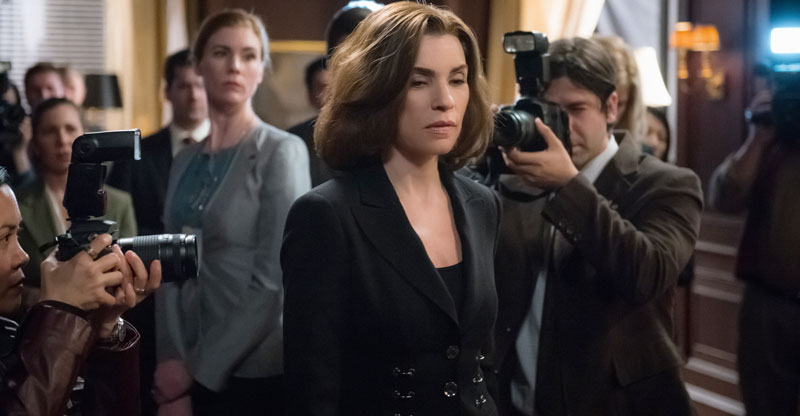 To me the body of Alicia Florrick – continually surveilled, critiqued, photographed, interrogated; presented for display – has always been the body of America. The first scene in the pilot finds this so-called “good wife” slapping the shit out of her corrupt and cheating politico husband, as a wake-up call for all of us. But like America – every time, eventually – Alicia has never found any one part of herself so hateful that she couldn’t find a way to confront it, to talk it out through deeds and compromises, and find a way to call it back home again.

And if that hurts, it should hurt like hell. And if we scream, we should be – and are – screaming our asses off. And if it means we idolize ourselves a little less in the end, I can’t think that’s anything less than a perfect outcome. Because the real education of Alicia Florrick lies in one central fact: