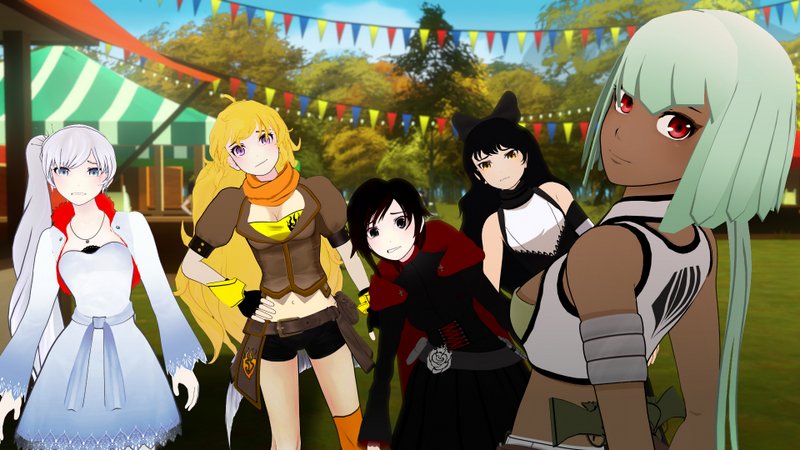 The Red Wedding. The parting of the Fellowship of the Ring. All of The Empire Strikes Back. Every epic fantasy has its dark turn, and the anime-influenced action series RWBY is no exception. With Volume III. Writer/director Kerry Shawcross said, "We really wanted to hit the fans hard."

The online animated series from Austin's Rooster Teeth studio began as a show about four girls in a magical school, learning to fight strange monsters called Grimm. With the latest volume, the world expands and explodes, with the happy-go-lucky mood of Beacon Academy falling into chaos and a newfound serious streak.

The seeming change in the show was shocking to many fans, especially after the tragic death of show creator Monty Oum. Yet prior to production starting on Volume III, Rooster Teeth founder Burnie Burns said that the story was all part of Oum's long-term plan. Co-director and RT animation chief Gray Haddock explained, "It was more about making sure we had a conversation with the audience that what would happen in Volume III was always the plan, that Monty was aware of it, Monty helped conceive some of those moments."

For co-director/writer Miles Luna, the big changes are all part of the master plan. "We knew where we wanted it to go, just how crazy it was going to go, and where our ending was heading."

Austin Chronicle: RWBY Volume I introduced characters, Volume II broadened the world, and Volume III is where the plot really fits together. The Twitter response when everything came together – and started falling apart for the characters – was basically "What the hell?" Where you prepared for the response from the fan base?

Miles Luna: When it came to introducing the characters in Volume I, the thing that we tried to do with them is that you think you know the archetype at face value. A great example is Yang: When the audience first meets her, she seems like that party-hard kind of girl, the popular preppy girl, and that’s what you get the first time you see her, and then you learn she’s like a mother figure to Ruby, she has this very compassionate side.

We wanted to do the same thing with the tone of the show, whereby it’s introduced as a Hub anime, it’s this fun show where it takes place in a magic school, but then we wanted to do an about-face and pull the rug out from under the audience and say, "No, this is not what the show is about." It’s just as intrusive to the audience as it was to the characters, that suddenly, whoa, everything that was going according to plan is suddenly out the window.

Gray Haddock: And Rooster Teeth has never put a parental advisory on its videos in the company’s history, and we didn’t want to start now, but halfway through this season was a good time to remind all the parents and babysitters and uncles and aunts who would have been sharing the videos with the much younger end of the audience that, hey, we’ve been trying to make as much noise whenever possible in the behind-the-scenes supplements on the DVDs, or at panel appearances at conventions, that there was more to this story than what they had seen in the first couple of volumes, and the full story of RWBY is going to involve a lot of changes and emotions.

AC: With Monty dying before production started, what did that mean to you guys, and what was the state of this volume, from a practical point of view?

Kerry Shawcross: Because we’d been working on the story for so long, we all had been talking and had an idea for where we wanted to go, what we wanted Volume II to be like, what, looking forward, we wanted the end of the season to be like, but we hadn’t even started writing scripts yet.

ML: There were lots of late nights where we were talking together, and I don’t think there was ever a worry about what we were going to do from a story perspective after Monty passed. As a family, it was quite devastating, but we always knew we were going to be able to persevere and stick to our guns with what we had set out to do all those years ago.

AC: The show finally got a release in Japan, which is obviously a huge deal for a show with clear anime influences. What’s it like knowing that there is a Japanese dub, and there is this Japanese deluxe edition, and it’s broken into that market in a way that most American shows can never dream?

GH: It’s all been a pretty crazy experience, to be exported back into the country of origin that produced so much of the art that inspired us. We’ve been working with Warner Bros. Japan for about a year and a half now, and they’ve been such amazing partners to introduce RWBY into Japan. They have released Volume I on DVD and Blu-ray, and they’ve put it on the big screen in movie theatres for six weeks. We knew that they were going to treat RWBY well when they sent us the list of the Japanese voice actors they were proposing voice the parts.

KS: We kept scanning the email, going, "Wait, is this what they’re pitching to us, or is this pie-in-the-sky what they want, or is this people they’ve contacted already?" Turns out, these were people they already had on the books, and they were just going, "Hey, are you fine with this person?" Yes, of course, we’re fine with this person. They're all on the anime voice-actor A-list.