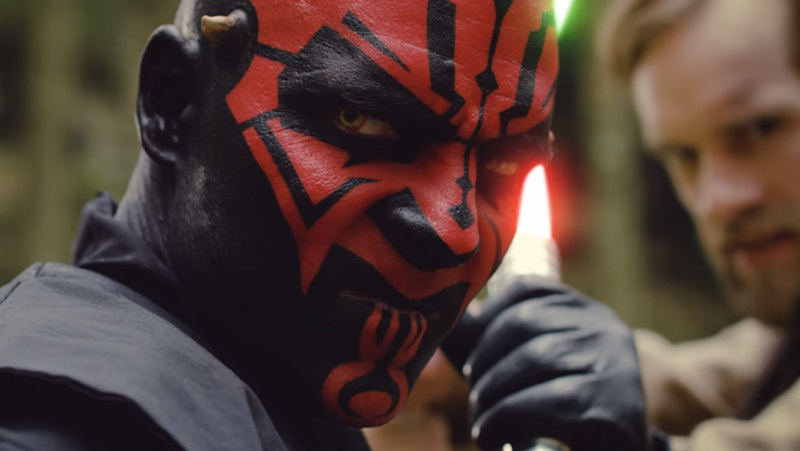 "Darth Maul: Apprentice", one of the Star Wars fan films screening as part of Other Worlds Austin's May the Fourth celebrations

How many Star Wars films are there? Seven? You're wrong. Even add in the two Ewok films, and you're still not close. There are hundreds of Star Wars films, it's just that most of them are made by fans. For May the Fourth, aka Star Wars Day, the Other Worlds Austin festival is celebrating this off-brand creativity.

Returning for its second year, the night will include Star Wars-inspired burlesque, and a dance party hosted by DJ Boba Fett. Yet at the heart of the celebration are the fan films, the heartfelt tributes and loving riffs on the universe George Lucas created. Other Worlds Austin Founder Bears Fonte put it simply: While they're creative, entertaining, ingenious, and sometimes quite brilliant, “Nobody is going to see 'Darth Maul: Apprentice' and go, this is a 'real' film.”

Why do fans make fan films, rather than create their own narratives? Part of the appeal, according to John E. Hudgens, is that the universe is already established. The director of fan-film documentary Backyard Blockbusters (which played at Other Worlds Austin 2014), he said, “You don’t have to explain the setup of Star Wars. If you’re going to tell your own original story, you have to set up everything. But you don’t need to explain Darth Vader, you don’t have to explain lightsabers, it’s all already there, people get it, and that’s one less thing you have to do.”

Every major fandom has produced its own fan films, and the relationship has often been complicated. There have been recent headlines about Paramount suing the makers of ambitious fan feature Star Trek: Axanar for copyright infringement after it raised $600,000 in crowdfunding. Yet there have been dozens of smaller projects, even ongoing web series, to which they have turned a blind eye. Red Dwarf producer Doug Naylor ran a fan film competition and included the winner on the series VII DVD.

Lucas and Lucasfilm have a particular history of encouraging fan films: from 2002 to 2011, they ran the Official Star Wars Fan Film Awards, with George Lucas himself selecting some of the winners personally. The competition was resurrected last year before the release of Star Wars: Episode VII – The Force Awakens: However, Hudgens said, “Even Lucasfilm wasn’t always on board, but they came around really quickly. I think it was back in ’98, the Australian short 'Dark Redemption' got a [cease and desist] before somebody at Lucasfilm went to the lawyers and said, 'Dude, rope it in.'”

Hudgens knows about the liberty granted to fans. Not only did he direct Backyard Blockbusters, but he also directed a quartet of the most famous fan films: "The Jedi Hunter," "Darth Vader's Psychic Hotline," "Sith Apprentice," and his first fan short, "Crazy Watto," which will screen as part of the show.

He admits that "Watto" was basically a goof, him and his friends playing with their toys. That silly joke became an early viral video success, was selected for the Lucasfilm competition, and even made it to Cannes. For the follow-up, "Darth Vader's Psychic Hotline,” he said, “We were trying to win. We made it look really flashy, I got my friends to help out, we tried to stack the deck, and it’s funny, but it’s not funny."

It was with the follow-up, "Jedi Hunter," that the team really cracked the equation. The idea came when he and his friends were waiting at a restaurant for Peter Mayhew (famous as the man inside the Chewbacca suit). Hudgens said, “We had people at tables around us laughing at the ideas that we were throwing around. So we made that because we just had to see it, and we didn’t care if there was going to be a contest. We just wanted to please ourselves, and of course that’s the one that won all the awards.”

For Hudgens, that sense of fun – even when the story is serious – is what separates a good from a bad fan film. However, when Fonte booked this night of shorts, he also wanted to highlight OWA's dedication to storytelling in sci-fi. For example, Fonte said, “We’re not playing ‘Ryan and Dorkman’ because it’s a great lightsaber fight, but there’s no story.”

However, there is a story behind “Ryan and Dorkman.” Its stars and creators, Michael Scott and Ryan Wieber, parlayed their shorts into successful careers in TV and Hollywood as visual effects artists (Wieber even scored a credit as a digital compositor on The Force Awakens). According to Hudgens (who got his filmmaking start editing Babylon 5 music videos), it’s not uncommon for ambitious amateurs to get noticed. He said, “They’re using these as calling cards, proof of concept. 'This is what I can do with nothing. Give me a budget and I’ll knock your socks off.'”

The films have also had a subtle impact on the direction of franchise, making its own stars. For example, Amy Earhart, the Austinite who played unlikely rebel pilot Stacey in the “Pink Five” films, has become a celebrity in her own right, appearing at official Star Wars events. Fonte said, “I think honestly one of the reasons you have so many strong female characters in the new trilogy is because 'Pink Five' was such a success, and people wanted to see a female X-Wing pilot.”

But these changes were accidental, and for Hudgens, the important thing is to do it for the love. When he made his films, “We weren’t just trying to make something funny. We were having fun making something funny.”