“This season definitely has a lot of story to tell,” Nathalie Emmanuel, also know as Missandei, Daenerys Targaryen’s right-hand woman on Game of Thrones, told The Austin Chronicle Sunday evening. 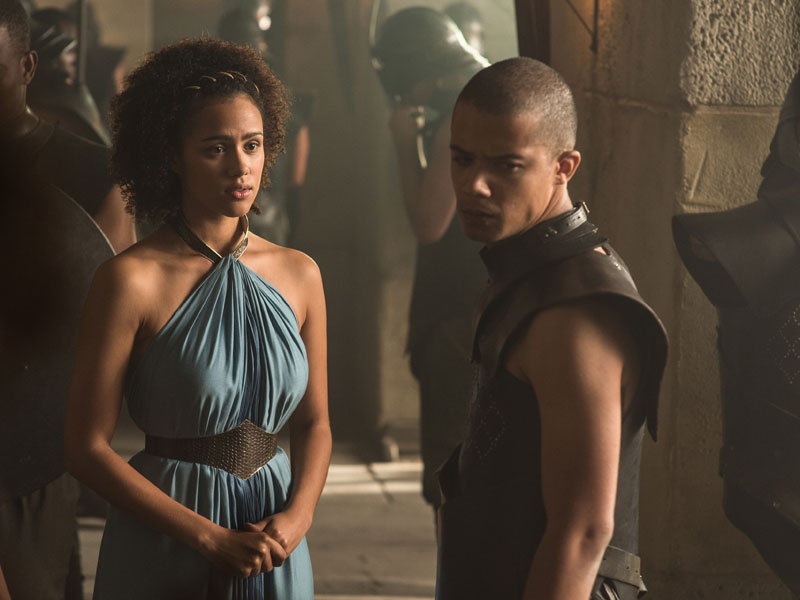 The British actress landed in town just in time for HBO’s GoT–inspired scavenger hunt, followed by a special screening of the season 6 premiere at the Alamo Ritz, sponsored in part by the ATX TV Festival.

Prior to the show’s return on Sunday, the last we saw of Daenerys Stormborn was in an unknown land surrounded by unknown people (well, it was pretty clear it was the Dothraki), and Emmanuel confirms that the missing queen definitely has an effect on her own character’s role. “I don’t know if you’ll necessarily see more of me,” says Emmanuel. “In terms of the number of characters coming into season 6, it’s so big and there’s only so much screen time, but we’re definitely seeing Missandei in a completely new role. Without Daenerys, her role in the decision making is quite fundamental to the state of Meereen. It’s been quite fun – I got to work intensely with Peter Dinklage (Tyrion Lannister) and Jacob Anderson (Grey Worm). They’re an absolute hoot, the pair of them.”

This trip marked Emmanuel’s first time in Austin, whose premiere she chose over Atlanta’s for both the newness and to visit two friends who moved here from England. But her appearance at the screening happily surprised the theatre filled with winners from the earlier scavenger hunt (314 teams participated in the game). When it was announced that Missandei’s alter ego was in attendance one audience member shrieked in delight. 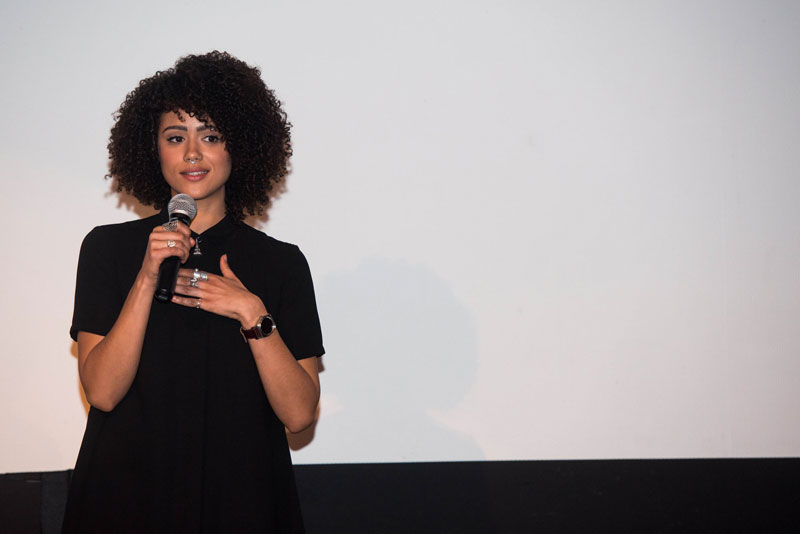 Emmanuel awarded prizes to the winners of a GoT-themed scavenger hunt prior to the season 6 premiere. (Photo by Sasha Haagensen for HBO)

Seeing as Missandei has become a fan favorite, Emmanuel believes this just might be the reason her character has survived GoT’s ever-growing and always gruesome death count. “The showrunners are always so lovely and encouraging about my performance,” she says. “I feel like that’s why they kept me on the show. Or at least I hope so.”

But, on a series like Game of Thrones, no character – even main characters such as Ned Stark and Ygritte – is safe. “Obviously you do think every time you get a new set of scripts ‘Will this be my demise?’ But, to be honest with you, I don’t worry about it too much because I honestly wasn’t expecting to be in it past season 3. Being here in season 6 is such a joy.”

And if Missandei was to die? Well, Emmanuel knows how she wants that to go down, too. “If she were to go, I’d want her death to be quite noble,” she says. “Like she sacrifices herself in defense of her queen or Grey Worm – something where people are like ‘Oh no! but she did the right thing!’ Or it could just be really cute if like Grey Worm and Missandei grew really old together,” she laughs. “We sort of came up with this Westeros–Notebook kind of storyline.”

As not only a star of the show, but also a “hardcore” fan of the story, the vegan actress also admits that it’s “kinda cool” to know that fans would be upset if Missandei were to meet her demise. “I love the show, I love the people I work with, and I’m a fan so it’s cool to say I’m a part of this and to create that reaction in people.”

Despite the absence of her character in Sunday’s season opener, GoT did return with a bang and a few well-deserved victories (Sansa Stark, finally!). Of course, the is he/isn’t he question revolving around Jon Snow has yet to be answered, but hope – which is rarely seen on the show – still lives. And, perhaps the premiere’s biggest victory was its complete lack of a single rape scene.

So what can we expect in the episodes to follow? More. “With each season you think they can’t outdo themselves and you think you’ve thought of every possible outcome and yet they bring the unexpected and manage to outdo themselves again and again,” says Emmanuel. “Every year, and it’s so true of this season, but times a thousand. It’s a really cool season.” Photo by Sasha Haagensen for HBO