How Everybody Wants Some!! re-created history 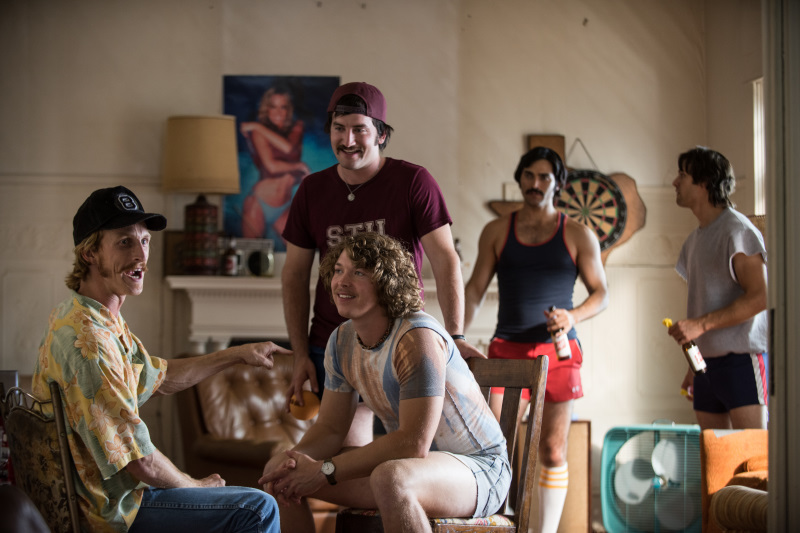 Who wears short shorts? Richard Linklater's Everybody Wants Some!! re-creates a three-day period in 1980, and that's a lot harder than it sounds.

It’s been said that Richard Linklater’s latest, Everybody Wants Some!!, is the Eighties successor to his depiction of the Seventies in Dazed and Confused, but that’s not quite true. After all, short-shorts and disco didn’t disappear at the stroke of midnight on New Year’s Eve.

Linklater’s college baseball ensemble piece is a snapshot of a very particular time (the three days before the start of classes in the fall 1980) in a very particular place (a Texas college town). This isn’t the neon, DayGlo Danskins, Patrick Nagel, Miami Vice Eighties, but the boot-scooping, Hustle-doin’, provincial long evening of the Seventies.

As much as Bridge of Spies or Carol or The Revenant, at its heart Everybody Wants Some!! is a period piece. The only difference is that the history is a lot more recent. So when it came to getting the details right, the process started with Linklater himself. Blake Jenner, who plays freshman pitcher Jake, said, “He was the time period coach from the future. I called him the sexy Doc Brown. He would let us know when we were getting out of line from ‘81 or ‘85 or even the Nineties.”

Producer Ginger Sledge said, “Rick was dissecting everything we did, but I did too. I graduated in 1979 from college, and I would see things and say, 'Uh-uh, no way, that wasn’t happening then.'” It came down to tiny details that, well, you had to be there to know. Sledge said, “One of the hair people was of our time, or a little older. The other hair girl was not there at that time, and she’d do a hair style, and I’d send the actress back and I’d say, 'They didn’t have hair like that yet.' Rick was like that on everything, but he had me as a double-checker.”

It’s not just about set dressing, or playing Van Halen's "Ain't Talking 'Bout Love" (released October 1978) rather than "So This Is Love?" (June 1981), or having a character reading the right edition of Carl Sagan’s Cosmos. It was about re-creating a culture, one before the sledgehammer of technology reshaped how people interact. Sledge said, “At this time, the technology was such that there were no cell phones and no computers to keep you occupied. So really what you had was your friends. You read books, or you listened to music, but you had your friends to interact with at a different level than we do these days.”

That affected the now-famous bunkhouse rehearsals, where the cast spent two and a half weeks at Linklater’s Bastrop home. Sledge said, “Rick didn’t ask them to, but the guys just put their phones aside, and they were able to get to know each other, and become friends in that way, which I think is kind of a rarity these days.”

The quest for historical accuracy even extended into the most minuscule details, even handshakes. Jenner said, “I’m a big bro-hug kind of guy,” said Jenner, “but he was there telling us the tiny things.”

Everybody Wants Some!! is in theatres now. See Film Listings for showtimes and review.

For an interview with the cast and crew, read "A Team Effort," April. 1.