It’s been 10 years since President Jed Bartlet left office, but for those that miss the golden area of American political drama on TV, good news from the ATX Television Festival: The cast and crew are reuniting to talk behind the scenes of the behind-the-scenes must-see.

• Alia Shawkat bringing her new TBS dark comedy Search Party back for another screening after its SXSW debut. 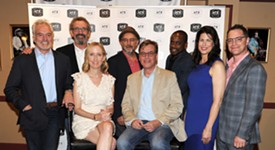 ATX TV Fest: The West Wing Reunion
Looking back on the legacy of the Bartlet administration