DVDanger: Kill or Be Killed The Western is back. The most American of cinematic art forms (except for when the Italians took it and did it crazier), adventures on the dusty plains have re-emerged as a proving ground for underdog filmmakers. Now Texas is getting back in the game with Kill or Be Killed.

The latest from Justin Meeks and Duane Graves is a departure from their reputation to date as horror guys: However, they remain solidly home-state boys. The Wild Man of the Navidad was a rare cinematic outing for the Lone Star State’s version of the Sasquatch, while San Antonio-set Bone Boys was a Kim Henkel-endorsed kin to The Texas Chain Saw Massacre. For Kill or Be Killed (which was shot under the more poetic title Red on Yella, Kill a Fella), the duo tell a highly fictionalized version of the tale of Sam Bass, notorious Texas outlaw and train robber gunned down just up the road from Austin in Round Rock.

Actually, Kill or Be Killed is more lightly inspired by Bass’ exploits than at any level a retelling. Here he is reinvented as Claude “Sweet Tooth” Barbee (Meeks pulling treble duty, on top of his co-writer/co-director credits), chief of a rough-and-tumble band of renegades wreaking havoc across late 19th century Texas. They fight, they rob, they murder, they cheat, and they do it with an amazing sense of period accuracy that gives it a veracity rarely seen in Westerns.

In that opening act, Kill or Be Killed feels right, feels authentic – almost to its detriment. Buried throat-deep in patois and dialect, it’s borderline impenetrable, forcing the audience to delve deep into its conventions while still trying to keep up with the characters. While it's the kind of effort more filmmakers should undertake, it's as distracting as the odd splash of digital blood or ill-considered ripple of CG fire.

It’s in the second act that it finds its gusto. After a series of particularly heinous crimes, and the crossing of paths with those far worse than Barbee's rough riders, their ranks start getting thinned by mysterious deaths, each marked by a strange yellow brand on their flesh. This is when the characters become more defined, their fates more impactful, and the final reveal the more disturbing. It helps that there is a real goal – the hunt for a lost stash of gold – to focus attention, and it binds the narrative tighter.

Meeks and Graves make nods to their horror roots, with cameos from TCM’s Edwin Neal and The Hills Have Eyes’ Michael Berryman. Yet what’s admirable, and a change of pace, is that this is a pure Western, much like Bone Tomahawk, The Hateful Eight, and the upcoming In a Valley of Violence (before you ask, that renaissance does not include The Revenant, which is a frontier adventure, or The Keeping Room, which is a Civil War drama, and so about as much a Western as Gone With the Wind.)

But this isn’t the Western John Wayne would recognize. This is much more the noir feel of bad people doing bad things for no good reason, and the best person is just the least worst. As time goes on, Barbee’s limited code of ethics is revealed, for what it’s worth. But that’s just how people are, especially in an environment where the rules of society seem derived from the mental meltdown of Wisconsin Death Trip.

Kill or Be Killed (RLJ Entertainment) is out on DVD now. For an interview with Meeks and Graves, read "A White-Knuckle Western," Feb. 26. 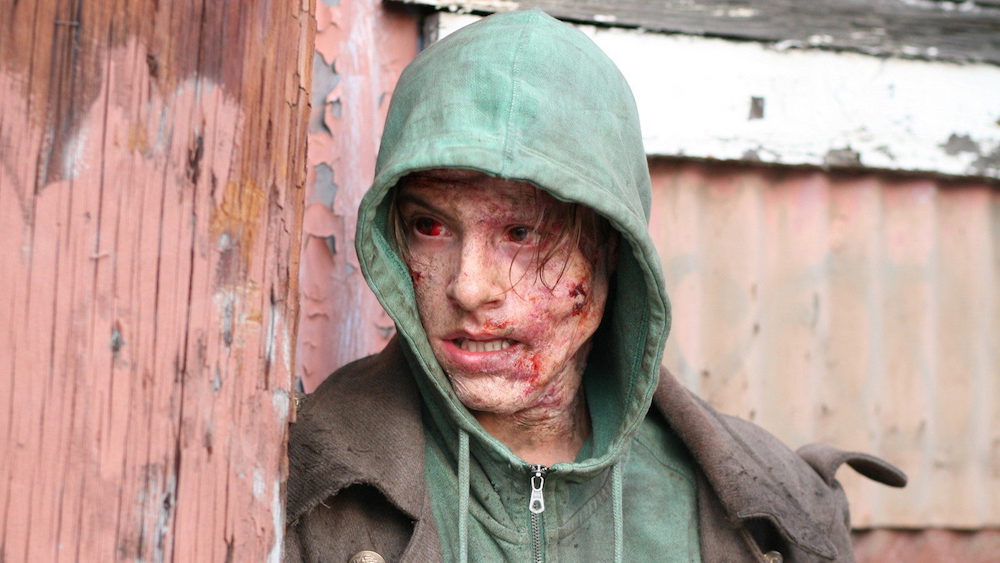 Frankenstein (Alchemy) may seem like the most hollowed-out story, with nothing fresh to say. But writer/director Bernard Rose breathes new life into the hoary monster. There was a point when Rose was one of the most talented and intriguing horror directors, with the eerie Paperhouse and the original Candyman in his résumé. However, anyone that endured wish-it-had-stayed-lost found-footage mess sxtape might believe he was done as a creative force. Plus, after the sloppy CG mess of last year’s Victor Frankenstein turned the story to ashes, that seemed like double strikes against him adapting Mary Shelley’s classic.

Far from it. He rejects the Gothic set dressing for the Gothic heart of the story, with Xavier Samuel (The Loved Ones) as a perfect experiment who becomes a crumbling but unkillable pile of shambling flesh. His ‘parents’ (scientists Carrie Ann Moss and Danny Huston) try to dump their failed experiment, but his path through the world inevitably sets them on a catastrophic collision course.

Like Meeks and Graves, Rose takes great advantage of a horror veteran cameo (his Candyman Terry Todd) as the blind man, but it’s his world building that is so perfect. Re-creating Shelley’s forested Mittel Europe as the streets of Los Angeles, he leads the creature (played with brittle tragedy by Samuel) through homelessness and despair, towards a shocking revelation that is both horrifying and astoundingly heartbreaking. Rose takes it back to the questions of social and scientific responsibility, the ethical quandary that ripples through the book. However, his brilliant reversal is to show everything through the creature’s eyes, through his development, degradation, and final acceptance of what he is, and his place in the world. The gore comes secondary and chillingly to the metaphysical horror of exploring rejected humanity, whether grown in a lab or dumped into homelessness.

The Vincent Price Collection Vol. III (Scream Factory) After two deluxe editions of the best of the master of Gothic delight raided the best of his run with AIP (see our reviews of Volume I and Volume II), Scream is headed for the deeper cuts of his career. Sadly, still no Theatre of Blood, but Jules Verne’s Master of the World, Tower of London, Diary of a Madman (based on Guy de Maupassant’s “Le Horla”) and Cry of the Banshee are all worth the price of admission.

Yet the extras, more than ever, are where this set shines. An extended interview with long-time Price collaborator Roger Corman, an extended documentary on horror legend Richard Matheson, and extras and TV appearances galore make this a must for fans. But the true gem is the inclusion of 52 minutes of Price reciting the works of the king of East Coast Gothic in An Evening With Edgar Allan Poe: It doesn’t get much better than hearing his sonorous tones do straight takes on "The Tell-Tale Heart," "The Sphinx," "The Cask of Amontillado," and "The Pit and the Pendulum.” Sheer perfection.

The Boy (Chiller Films) already appeared on VOD last year, and may end up being confused with the evil doll flick of the same name, but it’s definitely not something to be missed. The SXSW horror dissects the birth pangs of a serial killer, in a dry slow-burn that finally erupts into an inferno. Let’s put it this way: The more copies you buy, the greater the likelihood that the planned trilogy will be completed, and this is far too intriguing a first step to not see all the way to the end of the road.

Rattle the Cage (Netflix) caught headlines at Fantastic Fest last year for being the first genre film from the United Arab Emirates, but won rave reviews for being a slinky, ingenious, sealed bottle noir. Catch it now on Netflix, and read our interview with director Majid Al Ansari and producer Rami Yasin, "Fantastic Fest 2015: Zinzana," Sept. 28, 2015.