Whether by dint of marketing mandate (American comics for American readers) or ancestral DNA (comics as a fundamental American art form), the Nineties “British Invasion” of comics writers, on whom early DC Comics’ Vertigo line (dark fantasy for mature readers) staked its success, made it their business explaining America to itself. 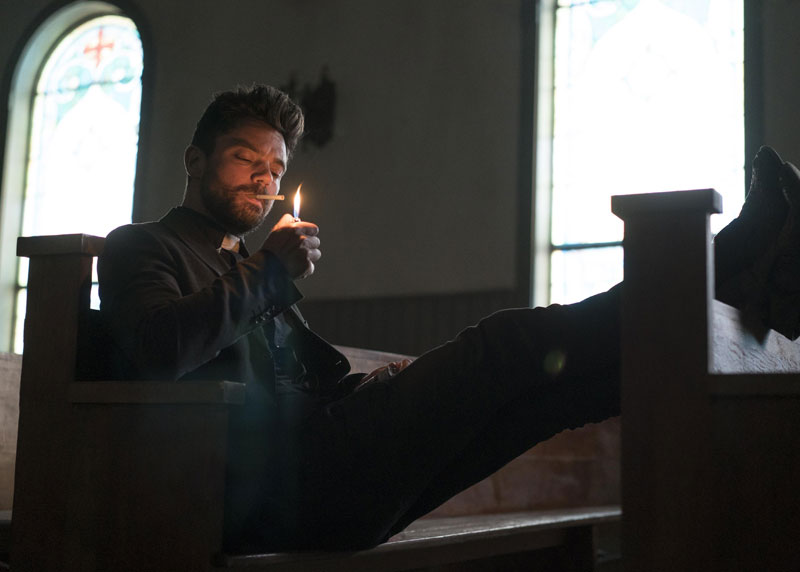 Irish Peter Milligan’s Shade, The Changing Man began with an “American Scream,” a journey through the country’s psychic underside. Vertigo granddaddy Alan Moore took his groundbreaking Swamp Thing on a similar tour. Scottish Grant Morrison’s beloved Invisibles rebooted itself into Americana to revive flagging numbers. Even Neil Gaiman’s The Sandman, a story about literally all of time and space, spent half its time in the U.S. But of them all, Garth Ennis and Steve Dillon’s Preacher took the project most seriously: A series about an America, and a Texas, created entirely from old movies, attitudes, and childhood obsessions.

Showrunner Sam Catlin (Breaking Bad) and producers Seth Rogen and Evan Goldberg – for whom developing this show has been a ten-year investment – are thus intended to turn a fantasy of a fantasy – in which Kurt Cobain’s suicide was a massive plot point; when we still thought Trump Nation was just a funny, nasty boogeyman – into something real and relevant.

Gleefully gory, mysterious to a fault, and carrying all the swagger and smugness of the source material, Preacher’s pilot is set just before the comic begins. We spend an hour getting to know Jesse Custer (Dominic Cooper, charming and introspective as ever), a disbelieving preacher in search of atonement for his vague past violence, and one of the better comics characters in the last 30 years: It was a relief to hear Cooper, in the Q&A after the screening, praising Jesse for specifically his “stillness,” which is the perfect word.

Jesse is joined by an appalling Joe Gilgun as Cassidy, an Irish vampire with no redeeming qualities but for ubiquity and charisma, but it’s third lead Ruth Negga who crushes it as Tulip O’Hare, ultraviolent criminal and Jesse’s ex-girlfriend, who narrowly escapes Cool Girl tropes with a sunny disposition, love of havoc, and mesmerizing likability. Though her storyline is the dealbreaker for most Preacher fans, to put it mildly, so far she’s the breakout she should be.

Also demanding praise, at least for this first 10-episode, small town-centric season (AMC, May 22) is Lucy Griffiths as Jesse’s church organist and right-hand man, Emily Woodrow. As for comic fan Easter eggs, a familiar Saintly outline appears on a whiskey logo; the new direction for Ian Colletti’s Eugene Root, a teenage suicide survivor formerly played for laughs, is particularly moving. And while Elizabeth Perkins and Jackie Earle Haley don’t appear in the pilot as the memorable Quincannons, they are perfectly cast.

Mostly, though, the pilot devotes itself to its business: Showing us a world utterly unlike the West Texas of reality – but very much one you’d imagine as a young Irish lad named Garth – and the trio of finely wrought, complex, lovable weirdos fated to blow it all to Hell.