Described by co-creator and star Danny McBride as a “nine-hour epic,” Vice Principals was ordered for two nine-episode seasons by HBO before the pilot was even shot. 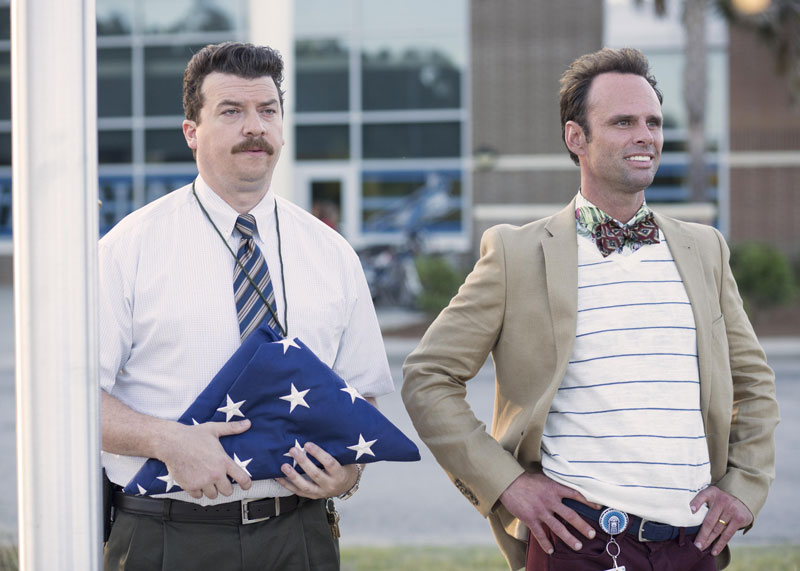 The DNA of other Rough House Pictures productions (The Foot Fist Way, and Eastbound & Down particularly) is apparent: McBride and Jody Hill know their strengths, and their audience.

The very particularly American mix of toxic masculinity and childish innocence that runs through all their work is here, as is the look-at-me vulgarity and unreconstructed bigotry. But unlike similar franchise rollouts – e.g. Chris Lilley’s Summer Heights High – there’s a twist here in the stories Hill, McBride, and David Gordon Green love to tell.

By splitting Eastbound’s bulletproof tiger Kenny Powers down a jagged middle, into Neal (McBride) and Lee Russell (an ecstatic Walton Goggins), we get new parts of both sides. Neal trades Powers' beastly sexuality for the loneliness of a family man without a family: McBride gets to show a vulnerability and maturity that only Katy Mixon’s April could ever find in Powers.

And playing Tyler Durden to this impotent fellow is Goggins’s Lee, an incredibly precise meditation on a real person you don’t often see on TV: The mannered Southern gentleman who appears in every way to be incredibly gay, but is not. Queer, absolutely; gay, probably not – nine hours to go – Goggins is by turns sociopathic, manic, tender, and seductive.

As rivals for a new job as high school principal – which ends up being nabbed by a newcomer, Kimberly Hebert Gregory’s steely and brilliant Dr. Belinda Brown – Lee and Neal spend a good portion of the first half-hour on tweener epithets and noogies, but by the second episode’s opening sequence, it’s clear a devil’s bargain has been struck.

While it’s unnerving as hell to watch two straight white guys viciously planning the downfall of a black woman authority figure, the story doesn’t take this part of itself lightly, ever. It’s the racist upheaval post-Obama’s inauguration. It’s 2016’s Bernie Bro rage, it’s GamerGate, Men’s Rights, pickup-artist terrorism. It’s the pants-crapping tantrum of men who don’t feel they’ve been handed quite as much as they were promised.

The stars describe their alliance as two men realizing they’re at a time in their lives when they need a friend: McBride because his wife (wonderfully serene, trashy-seapunk Busy Phillips) has remarried (Shea Whigham, hot as hell as the nicest man alive) and Goggins because he is just a huge, amazing mess. But McBride also offered this last, neat little nugget: That through this nine-hour, two-semester war on the perfectly lovely Dr. Brown, and the endless twists to come in their own sick bromance, they will have the chance to pull themselves together.

It never occurred to me to hope for Kenny Powers, because he was perfect the way God made him. But it’s fairly thrilling to be allowed to hope for these sad, monstrous, wonderful men: To watch them find whatever chaotic, wild, watch-it-burn brand of peace the world has to offer.