SXSW Film Review: In a Valley of Violence

Some tough guys just want to be left alone. Most of them, come to think of it. Let ‘em wander off into the Andalusian sunset, heavy-leaded and sagging sideways off their stallion into dust while an Ennio Morricone score bodes ill in the background. 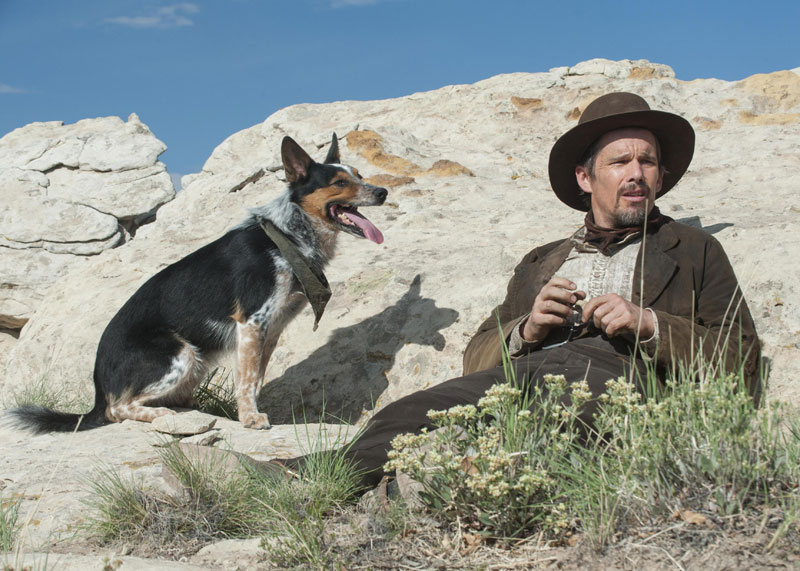 Think Jason Robards in Sergio Leone’s six-gun masterpiece Once Upon a Time in the West, or Franco Nero as the eponymous coffin-slinger, Django. Hellfire, for that matter, and while we’re talking modern Westerns, raise a sloshy tumbler of J&B to Kurt Russell in John Carpenter’s The Thing and Austin Stoker in Assault on Precinct 13. Precursors all, but Ti West’s In a Valley of Violence pays due homage to the classics - John Ford, Howard Hawks, Sergio Corbucci - while also being very much a Ti West film.

Which means off-kilter, borderline surreal moments shotgunned into lengthy stretches of unsettled semi-normalcy. The closest film I can think to compare the director's wild, weird West to is Sam Raimi’s The Quick and the Dead and that’s only because the two films feel like heartfelt parodies. (West wins over Raimi; you get the feeling the odds here are far higher than Sharon Stone vs. Leonardo DiCaprio.)

It’s the 1890s, and mystery ex-military man Paul (Ethan Hawke) rides angry into the dirtwater hamlet of Denton. This drifter’s best friend has been shot to death by the appropriately lowdown scum that more or less run the town - which looks and kicks as empty as a coffin to begin with - and Paul reluctantly sets out to settle the score. Shot in Santa Fe and Galisteo, N.M., West’s longtime DP Eric Robbins uses 35mm film to make the whole thing vibe as though it were set in some post-apocalyptic nowheresville. Comparisons to Alex Cox’s Straight to Hell are, for the most part, unwarranted, but there’s a sense of gallows absurdity that the UK director would probably dig.

In a Valley of Violence’s story is minimalist to the point of Monte Hellman, who also tackled the permanent existential threat of the Old West in Ride in the Whirlwind and The Shooting, but West infuses this tale of vengeance with a nasty sort of realism. Violent death is both a terrifying reality and a laugh-out-loud joke. Forget Lenny Bruce, this is the sick humor of Ti West. Kudos aplenty to indie horror Renaissance man Larry Fessenden for the terror and to John Travolta (as a wooden-legged Marshal) for the empathy in another brilliant and barely recognizable performance.

But the less said … right? Suffice to say, this departure from West’s usual run of seriously freaky spook shows is a brilliant piece of work, cordite-scented sorrow and last-laugh gags stabbed through with a discernible lust for life.