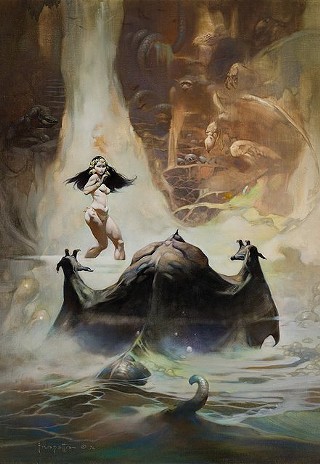 At the Earth's Core by Frank Frazetta, one of the fantasy artist's works being presented by Robert Rodriguez during SXSW

The legacy of a 20th-century fantasy master returns to Austin for the third year: Director Robert Rodriguez has announced that he'll be bringing 15 works by Frank Frazetta back during SXSW.

Frazetta's work was ubiquitous for decades, defining the visual code for fictional barbarians. But while many of his followers simply emulated his muscles and monster, Frazetta's world had a grime and reality, a smoky mystery that few could ever replicate. This show will add several new pieces to the collection, which Rodriguez brought to town for the last two years. That includes Frazetta's Flash Gordon, Kubla Khan, and arguably his most famous piece, Moon Maid.

However, Frazetta isn't the only artist whose work will be celebrated. Drew Struzan is arguably the king of blockbuster poster art, and his original designs for Sylvester Stallone's First Blood and John Carpenter's The Thing will also be on display. Add on that original Sin City art by Frank Miller, and you've got an insight into many of Rodriguez's influences.

For more on the seminal fantasy artist, and how he's affected and influenced Rodriguez, read our interview from last year, "Frazetta Up Close." 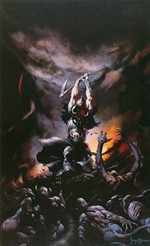 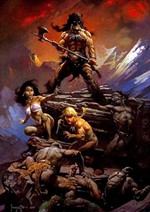