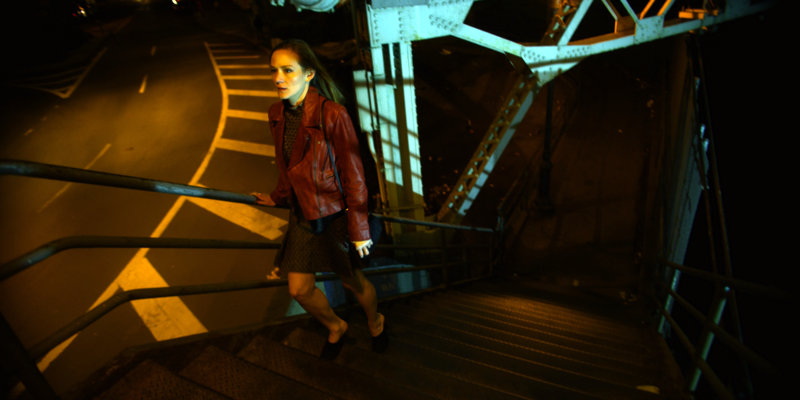 One step at a time: Ava (Louisa Krause) tries to put her demons behind her in Ava's Possessions (Image courtesy of Momentum Pictures)

Most demonic possession movies stop just when things gets interesting. The demon is gone, but what happens to the victim after the ultimate lost weekend. When Jordan Galland starting writing possession-recovery horror-comedy Ava's Possession, he said, "The pitch to myself was Rosemary's Baby meets Memento.

Galland debuted the film at SXSW 2015, arriving the day before the Festival began with most of his crew and then sticking around to catch friends playing the music component. By the end, he said, "I was crawling around, just trying to pick myself up after the wild times."

Now, almost exactly a year later, Ava's Possessions arrives on VOD. Galland calls it "an amnesia movie that has this mystery detective element, but the hero is this girl who is recovering from demonic possession." Ava (Louisa Krause) wakes up to realize that she's just been exorcised, but now her family can't see beyond the supernatural forces that were in her, her friends won't invite her to parties (green projectile vomit stains the carpet so), and she's finding a long and embarrassing list of people she slept with. Worst of all, she has to go to Spirit Possession Anonymous, a cloying survivor's support group.

Austin Chronicle: The demonic possession genre has become dominated by The Exorcist clones. How did you approach coming up with something fresh?

Jordan Galland: It was a synthesis of a lot of different cravings that I had. Part of it was that I like possession films, definitely The Exorcist, but all of them. Movies like Emily Rose and Rosemary's Baby – well, that's a masterpiece. There's no movie like Rosemary's Baby. But as far as a woman trapped in an apartment, recovering and experiencing paranoia and being demonized and being marginalized, that kind of person as a hero, I just think that's a great type of a character.

I had an idea for a demon possession movie that was more like Men in Black with demons. I was exploring a government agency that was on the look-out for demonic possessions. I spent a couple of years playing with that treatment as I was working on other things. I had interest at bigger production companies, but when the development process would start, I just didn't like where it would have to go in that version.

And then one day it just popped into my head, the vision of a girl in her apartment, with no memory of what had happened. I felt very attracted to that idea, that we would follow this person who had been marginalized and had to figure out what happened to her.

AC: There's a degree of an addiction metaphor, with the exorcism as an intervention, the support group being very AA-like, and one character even wanting her demon back because it was such a thrill ride.

JG: When we were making the movie, I had this conversation with the cast a lot. Certain actors would ask, "Is this a metaphor for mental illness or addiction?" and on the one hand, I want to say yes, but on the other it's always been a metaphor. I feel like the conception in past cultures of demonic possession came because there was somebody who was ill, and we interpreted that as a demon living inside of them. Then obviously the etymological connect between spirit, meaning drink, and spirit, the demon. People had alcohol and they'd start acting crazy, and we'd think they'd have spirits inside of them.

AC: How did you get Carol Kane as the witch store owner?

JG That role was always changing. I knew that it was a special role, but there were more scenes, there were less scenes, and especially as we approached production it was just an unstable role. We had approached another actor who I had a connection to, so we didn't quite go through the casting director, and then that actress fell through very, very close to production.

It was literally the Thursday and we were shooting that scene on Tuesday. On Sunday, [Kane] accepted the role, and everybody was really excited. But there was this miscommunication, and I get this call from her at midnight. She was a little bit upset, because she was told the script would be waiting for her, and she really wanted to prep. She was like, "You know, I usually spend more time on it, and I really thought the script would be waiting." I went, "I'm really sorry," and I messaged a script to her. In the meantime, we talked a lot about the character.

She said, 'Normally, I'd be reading books, but there's no time, so just tell me what you wanted to do, and we'll just start from there. I can only imagine that, since I'm being cast at such a late date, you had another actor cast for the role, so it would really help me if you tell me who that actor was, so I would know what you were going for.'