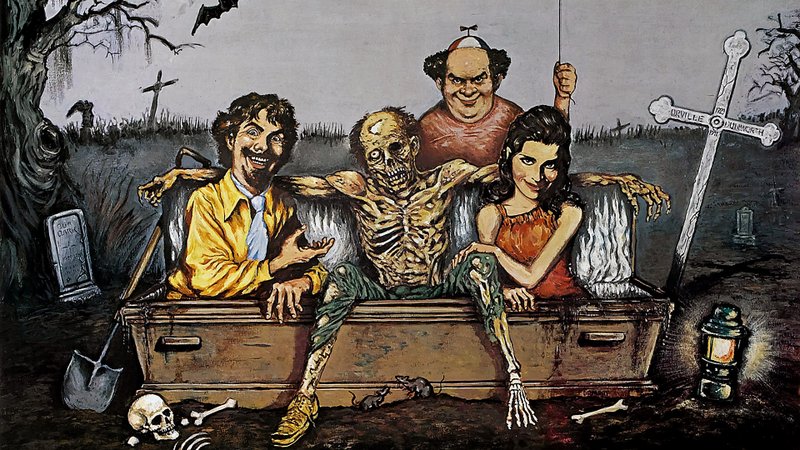 It's hard to remember a time when zombies weren't ubiquitous. But in 1972, when Alan Ormsby starred in Children Shouldn't Play With Dead Things, it was all fresh meat. Ormsby said, "Everybody knows the rules at this point, but we just assumed they did."

The $50,000, 11-day micro-production has earned itself a peculiar place in zombie cinema history. A troupe of hippy actors head to an island off Miami, and engage in a little bit of grave robbing. It's all supposed to be stupid transgressive fun, but then maybe Orville the corpse doesn't appreciate being disturbed.

This week, Children sees a long-overdue Blu-ray re-release that could see its fame spread beyond celebrity fans like Quentin Tarantino and Tom Savini. An acerbic and mean-spirited dissection of the death of the hippie dream, it's that rare horror-comedy that is both comedic and horrifying. It's also the cornerstone of a trilogy of subversive shockers created by Ormsby and Bob Clark continuing with the Ed Gein-inspired Deranged, and anti-war shocker Dead of Night.

After their somewhat acrimonious split, Clark become a familiar name as a director, with films as diverse and beloved as Black Christmas, Porky's, and A Christmas Story. Meanwhile, Ormsby had an incredibly varied career, that included writing credits as diverse as the 1982 remake of Cat People, Disney's Mulan, and The Substitute franchise. Outside of Hollywood, he may be most famous for creating million-selling dress-up doll Hugo: Man of a Thousand Faces.

That may sound like a ricochet career, but considering Ormsby not only co-wrote Children, but was also the make-up artist, publicist, and also played Alan, the manipulative theatre director and wannabe mystic whose Crowley posturings end up raising the dead. He said, "[Clark] wanted to use our real names, because he said it would make it easier for him to recognize us in the edit. He wanted to do a Cassavetes thing."

Austin Chronicle: Children is the first time you worked with Bob Clark. How did you meet?

Alan Ormbsy: We knew each other in school, in college. We did plays together and so forth. We both wrote plays and we both acted in each other's plays, and about five years after that, I was back in Miami and I ran into him on the street, and he said, "I've got some money to make a horror movie, have you got any ideas?" I told him that I wanted to see Night of the Living Dead, which was playing at some theatre. So we went to see that, and that's where all of this came from. We just ripped it off, and added a lot of dialogue.

AC: Bob was director, but you did some of everything else. You co-wrote, acted, did the special effects. How much did your theare background prepare you for cinema?

AO: I wanted to be an actor – not after this – and I wanted to be a make-up man. I wanted to do monster make-up. When this came along, I thought, well, I think I can do it, because I've done masks. Then I did the make-up, and I just decided I didn't want to do make-up. It just wasn't my alternate thing.

AC: The famous conjuration scene, I could see that being a writer's dream because you can go as purple as you like. It's a torrent of alliteration.

AO: I think I wrote that, and I know I wrote a lot of the stuff at the end in the cabin. It's kind of like Bob said, 'I don't have time to write this, can you write this and can you add scenes here and there?' It's really hard to remember. I have the script still at home, but it's still hard to tell what I did. It was a blend of everybody really.

But it was very purple. Matter of fact, I didn't like the script when I first read it. It was too much talk and not enough action. Now I like it as just what it is, but I kinda wish we had gone the Texas Chain Saw route, it's expensive and time-consuming to shoot action, and we just didn't have the money or the time. We put all the money in the zombies.

AC: It seems like it was one of the definitive run-and-gun productions. You were everywhere: You were writing, you were performing. How physically tough was it to just get it done in such a short time?

AO: I was young, so that helped. I was watching it, and I realized that my shirt was soaking wet, all the time. Writing it, and then building all these make-up pieces, and then putting the make-up on, and then acting it. I did the advertising even, and I promoted it at various conventions. It was fun, I had a good time. We didn't make any money, it was $200 a week, if that, but when you're young and you just want to make a movie, you don't think about anything else.