Richard Linklater chats with Hawke on his illustrious career

Ethan Hawke and Richard Linklater are two names synonymous with Austin. Their work is diverse, boundless, and endlessly creative. The pair also happen to share a close friendship with each other, have seven Oscar nominations between them, and have collaborated on eight projects over the course of their 21-year careers. 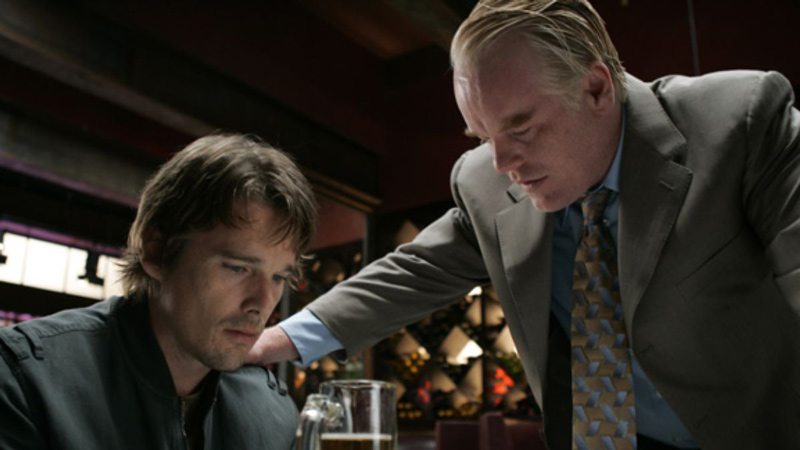 Ethan Hawke and Philip Seymour Hoffman in Before the Devil Knows You're Dead, which screened as part of AFS' event.

Last Thursday, the Austin Film Society hosted a double event focusing on Hawke. The first, a special 35mm screening of Before the Devil Knows You're Dead centered on Hawke's experiences with Sidney Lumet and Phillip Seymour Hoffman. The other half was an in-depth discussion with Hawke, moderated by Linklater.

The Marchesa Hall & Theatre was packed, and instead of being mere members of a crowd, we felt like flies on the wall, observing an intimate catch-up session between two old friends.

A series of clips were shown from Hawke's canon including White Fang, Training Day (Hawke's first Academy-Award nomination for acting), Linklater's own film, Waking Life, The Women in the Fifth, and SXSW alum Predestination. Hawke shared personal stories and anecdotes from these films and then some.

The conversation began with Hawke's earlier career highlights, and discussed how he got the role in Dead Poets Society. The casting department called several prep schools asking if they had any student actors/recent grads, and a women who had seen Hawke in a play (from a different school) mentioned him, and Hawke got an invite to audition. At the time, he was at Carnegie Mellon University and extremely unhappy. "I called my sister and I got a hold of the script and I read it and it had seven parts for young guys." He told his sister, "I'm going to go to New York and audition and I'm leaving this school. If I don't get one of these parts, I must not be talented and I don't want to be here anyway." Hawke nailed all of his callbacks and eventually got the role of Todd Anderson. Director Peter Weir showed Hawke his screen test which, according to Hawke was, "God awful."

A few years after the release of White Fang, Linklater met Hawke and thus began their friendship and collaborations together. "When I first met Ethan, he had just published his first novel, started his own theatre company in New York, and had already directed a film. He was the biggest actor of his generation, he was getting offered everything. You were 23 years old. To me, you were fully formed," recalled Linklater.

Hawke took a slight detour when he shared a story about author David Foster Wallace. He went to a reading of Infinite Jest while in New York and he remembers Wallace saying, "they walked into a room, like characters from a Richard Linklater film. I called you [Linklater], and said, 'You are not going to believe this but in David Foster Wallace's new book, he mentions you. How cool is that?'" Hawke bought the book, but could not seem to find the line anywhere. He was puzzled. Recently, he discovered an answer to his plaguing mystery, as he came across an article from a Rolling Stone on Wallace. Wallace told the same story as Hawke, but with some major differences. Turned out, he was nervous and was making fun of Hawke by inserting all these references about him. Wallace mentioned in the article that he offended Hawke. Hawke's response, "No, dude, I'm not that smart. I was excited and wanted to call my friend. "

Linklater's Before trilogy is easily one of his most definitive works. Jesse and Celine's (Julie Delpy) journey starts out hopelessly romantic, swerves into complexity, and ends as lovely as ever. Hawke and Delpy's characters never stop being intoxicatingly wonderful. The pair, along with Linklater, share writing credits on Before Sunset and Before Midnight. Hawke came up with the premise for Sunset while at a BookPeople signing. Linklater was picking him up, and Hawke asked Linklater: What if Jesse's book was Before Sunrise and Celine was waiting for him? The duo began riffing off the idea and called Delpy while on the road, and Hawke's idea came into form.

The conversation ended on a sweet and sentimental note. "If everyone had as high a standard for what they are striving for and made the choices Ethan makes, it would be a much better cinema landscape. I admire his approach," Linklater said. Hawke responded, "If you made more movies, I wouldn't have to make so many choices."

Linklater and Hawke's new projects can be seen in just three short weeks at the South by Southwest Film Festival. Everybody Wants Some (spiritual successor to Dazed and Confused) serves as the opening night film for the Fest. Hawke has two features, a biopic on musician Chet Baker, Born to Be Blue and Ti West's Western In a Valley of Violence.