You’ve probably seen Zach Hall around. He’s noticeably tall. He might also be wearing head to toe spandex as the frontman of Queen cover band Magnifico. Less noticeable, but equally notable is his design and animation work, and now he’s Kickstarting a video game. 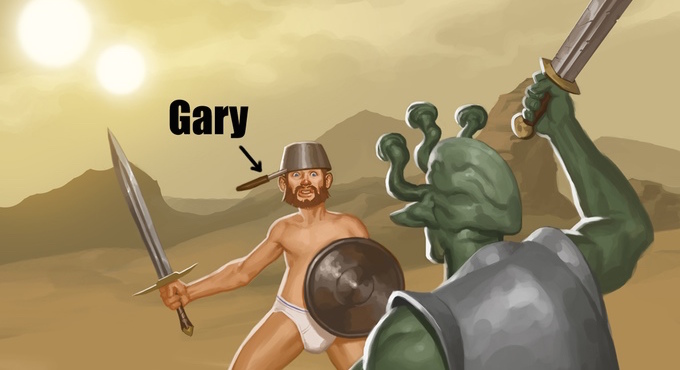 Hall’s résumé in video games includes the behemoth Star Wars: The Old Republic, the more recent Spider: Rite of the Shrouded Moon, and other notable titles that prove this isn’t his first rodeo. He also worked with Bob Sabiston as an animator on Richard Linklater’s A Scanner Darkly.

His new game development company, Big Beaver Hat, announced its first game, and commenced a KickStarter campaign late last month. The team is looking for $48,000 to make Sword of Gary 6000.

In case the fact that Hall is the lead designer, animator, artist, and writer isn’t impressive enough, he is also doing all of the sound effects and music a cappella. That’s right, all of the sword clashes, alien noises, various squishes, and other sounds will be sourced from Hall’s mouth.


The game takes cues from Punch Out with a from-behind perspective (ideal when your character wears only underpants). Why only underpants? Because he was mistaken for a fictional warrior and beamed from his mother’s house to an intergalactic fighting tournament. His armor consists of his underpants and the ramen pot he uses as a helmet. Not a promising start. The gameplay consists of slashing and defending along six angles to prevail over a litany of aliens out to prove the earthling’s inferiority.

The rest of the team includes programmer Zeke Brill who has worked for Atari, Lucas Arts, DreamWorks, and others. General video game handyman Randy Smith – who worked with Hall on Spider: Rite of the Shrouded Moon – offers his advice and expertise when needed. Finally, veteran project manager Nathan Black lends his stunt- and swordsman experience to make his leadership role all the more intimidating.