Live From The New Yorker David Remnick, editor-in-chief of The New Yorker, and now the lead voice on The New Yorker Radio Hour.
The show is a co-production with WNYC, and is broadcast on Sundays at 8pm on KUT Austin. (Photo by Brigitte Lacombe)

What defines The New Yorker? A handful of characteristics come to mind, mostly built around its commitment to long-form journalism. Editor-in-chief David Remnick adds another constant. "A magazine that doesn't have anything funny in it in a given week is a failed magazine." Now he hopes that humor is present in its new excursion into radio.

It's almost a joke at this point how quickly the media industry is evolving, but Remnick's 17-year career at The New Yorker has seen landmark after landmark. In 2008, the first tweets were sent from @NewYorker, but the publication didn't even have a website until 2001, the third year of Remnick's tenure as editor-in-chief. When he joined as a staff writer in 1992, email was an oddity. However, that didn't mean the 24-hour news cycle, and concomitant editorial communication, didn't exist. He recalled getting late-night faxes from then editor-in-chief Tina Brown, which were antithetical to sleep. "You don't hear a 2am email. A 2am fax, unless you live in dramatic splendor, you hear."

Podcasting is just another technical evolution for what was once described as print media. However, the Remnick-headed broadcast is not The New Yorker's first foray into audio. Its weekly cultural news update and commentary, Out Loud, launched in 2009 and ran until last October, but its monthly poetry and fiction shows, as well as the political scene, (launched in 2013, 2006, and 2007 respectively) are still going strong. "It's not as if we woke up one morning and went, 'Oh my god, there's this new craze that the kids are dancing to,'" said Remnick. "There's all kinds of new things. The question is: What can The New Yorker do that feels like it has the genetic material and humor and depth of the magazine, and at the same time works in that medium."

Which raises a very obvious question. If The New Yorker has already jumped into audio, and wants to ensure a particular sensibility, why bring WNYC into the equation? Remnick's response is blunt: "Because we don't know what we're doing when it comes to podcasting and radio."

The earlier iterations of the podcasts were effectively an in-house, volunteer effort by existing New Yorker staff. Remnick described the end result as "rough hewn. I think they're good, I think they're fine. They don't require enormous production. It's homegrown. They're very simple, so we can pull that off, but we couldn't go the extra mile. If you're going to do something with reported pieces and better sound, and get out into the field, we needed real producers who were devoting their time to this, not doing this with part of their left hand."

Remnick praised his staff for both their work and their willingness to step up. "I'm not in the habit of ripping off writers," he said. "Nobody is being asked to do things that they don't want to do." He compares that additional effort to the early days of blogs and web publishing, when writers were posed a very real question about what were their priorities. However, in the staff room of The New Yorker, the run-and-gun format of a blog can be a welcome change from the all-consuming process of building a long-form story. "There were some people who adapted to it pretty quickly, and made it part of their writing life. I think they liked the fact that they're not always spending four months [on a story], and once in a while they're responding to something out in the world, culturally and politically, in a quick way, and got an immediate rush of responses. There's something very pleasing about that, and if you can juggle it, and if you can handle it, it probably brought more readers to your longer, more considered pieces."

For the radio show, the balancing act is to create something that feels like the urbane New Yorker, but doesn't replicate what the other podcasts are already doing. Remnick said, "It's not like we'll be having readings. Those are for fiction or poetry." However, it also opens up new opportunities. The print publication is a haven for essayists and columnists, a bastion of long-form journalism and in-depth criticism. Remnick said, "We don't do Q&As in our magazine, the way Playboy famously did."

Yet the first 13 radio episodes have included his conversations with Claudia Rankine on race and Patti Smith about writing. There's no doubt that Remnick is an experienced writer and interviewer (he has a Pulitzer for his 1994 book Lenin's Tomb: The Last Days of the Soviet Empire to back that claim), but he again tipped his hat to the WNYC crew for helping finesse his skills for this different format. He said, "They know it's harder than just sitting in front of a microphone and asking questions one, two, three, four, and five, and they help us get better at it."

These are still early days for the show, and Remnick is open about the fine-tuning process – especially when it comes to translating that essential strand and brand of humor to radio. He cites the famous phrase coined by actor Edmund Kean: Dying is easy, comedy is hard. After all, he notes, he can't just get away with reading the cartoons out loud. "It may well be that doing even a contentious interview with writer A or politician B is easy, while comedy, true comedy, not just yuk-yuk, gag-gag, that's hard."

Remnick's long-term goal with the Radio Hour is to create "something that might be good in the beginning, and might be terrific or might be extraordinary over time." The subtext is that Remnick isn't expecting an Emmy in the next five minutes, and he compares these early episodes to the early days of the print publication. "It was OK. It was good. It was something new, in that its appeal was to this now long-extinct audience of Jazz Age Manhattanites. There were features of the magazine that were there from the very beginning, a certain typeface, a certain sense of humor, cartoons, 'Talk of the Town.' But most of the things that you think of as The New Yorker now didn't exist then. It took a while."

The New Yorker Radio Hour is broadcast on KUT Sundays at 8pm. Previous episodes can be downloaded at www.newyorker.com/podcast and www.wnyc.org. 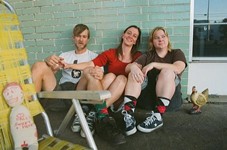 In the Monitor
Locals get love from NPR