Haskell Wexler and Taking a Stand 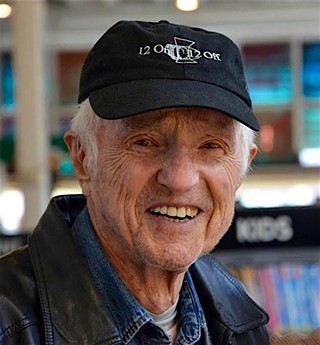 Editor's Note: Pioneering cinematographer and director Haskell Wexler passed away Sunday, Dec. 27, at the age of 93.

Here, we excerpt Louis Black's “Page Two” column from June 3, 2005, where he attended a reception in New York City celebrating the film collaboration of John Sayles and Maggie Renzi, at which Wexler was a speaker.

Wexler is currently in the limelight because of the release of Tell Them Who You Are, a documentary by his son Mark Wexler. The reception occurred in the context of this film; it is why and how people are currently talking and thinking about Wexler. There is no other way to tell this story without considering its impact both on the community and personally on Wexler and Rita Taggart, his wife and a genuine, unstoppable life force.

I haven't seen the film, but those close to Haskell regard it as a deliberate hatchet job, in which his son finally punishes his father for the many injustices he feels were committed against him. Critics are more mixed, many focusing more on the character and acknowledged brilliance of Wexler than on his son's portrayal. Still, many are buying it, portraying Wexler as exactly the kind of ivory-tower liberal whose politics are progressive but whose personal behavior is staggeringly selfish and often atrocious.

A strongly positive review of the film that took Wexler to task for his hypocritical contradictions had appeared in The New York Times that morning. The 79-year-old Wexler, seeming battered, was clearly upset and uncommonly defensive.

Accepting that Wexler is as flawed as any of us, still, if a 46-year-old hasn't gotten over his parental issues, it should be very clear where the problems actually lie. Mark Wexler previously made the documentary Me and My Matchmaker (1996), which is highly regarded, but was also involved with – as well as very proud of – Air Force One (2001), indicating at minimum severe political differences with his father.

Wexler's brilliance as a cinematographer is unquestioned; the films he shot are each stunning in their own way. Less well-known but as important are his contributions as an innovator in terms of equipment and techniques. He is often asked to consult or help out on films he is not shooting because of his visionary cinematic sense and technical knowledge.

Word has it that he has often been difficult to work with, as are so many cinematographers. Having watched him filming, I'm certain his attitude had almost nothing to do with ego and everything to do with artistry. His concentration is physically manifest; with an encompassingly intense glare, he considers light, angle, weather, composition, action, and everything else when setting up a shot.

Nominated for five Academy Awards, he won twice (for One Flew Over the Cuckoo's Nest – shared with Bill Butler – and Bound for Glory) and is one of only six cinematographers to have a star on Hollywood's Walk of Fame. Wexler shot for Frank Zappa on Burnt Weeny Sandwich and Uncle Meat and worked on the concert films No Nukes (1980), Richard Pryor Live on the Sunset Strip (1982), and Rolling Stones – Live at the Max. He suggested to a young fellow car enthusiast that he get into film. This friend then gave him a visual consultant credit on his second directorial feature, American Graffiti (George Lucas, 1973). Wexler was uncredited for his work on Ridley Scott's Blade Runner, Terrence Malick's Days of Heaven (1978), and Stanley Kubrick's Barry Lyndon (among many others) and fired from Francis Ford Coppola's The Conversation (1974).

As overwhelming as those credits are, they are seriously incomplete, as well as leaving off his directing and television output. They are barely the beginning of Wexler's story, because, most importantly, he has always been politically committed and involved. This is true both within the film industry, where he's been involved with organizing and bettering working conditions, and in his work for social and economic justice within the country and around the world. Wexler was director, cinematographer, writer, and co-producer of Medium Cool (1969), still one of the most innovative and politically ambitious commercially released American films. In one role or another, Wexler has been involved in making outspoken, often politically unpopular documentaries about Vietnam, Nicaragua, Mexico (Chiapas in particular), Cuba, Chile, and Brazil, as well as films about the new American right, swine flu, radiation, and the abuses of the CIA.

Working on these films often put him at great physical risk. He was blacklisted, and the FBI conducted a smear campaign against him. One of the few unembarrassed pro-labor voices in America, he not only shot Sayles' Matewan and Bound for Glory, Ashby's Woody Guthrie biography, but covered the labor movement around the country. He was over 70 when he spent night after night riding buses as he documented the story of Los Angeles' famous Bus Riders Union. Yet in The New York Times, this artistic genius and man of the streets and fields of the working people was labeled an artistic prima donna and an ivory-tower liberal.

The same night as that review appeared, one of any number of similar reviews of his son's documentary published around the country, Sayles and Renzi were rightly praised and the work of the North Star Fund justly celebrated. Words Sayles had written were read by some of the finest working actors and a tribute to the Sayles and Renzi filmography lavishly offered. Against the white room, among the beautiful and heartfelt, flowing words, 79-year-old Haskell Wexler rose.

In far fewer words and with much more eloquence than mustered here, he issued a call to arms. Not resting on the laurels of his amazing career, tied by the shackles of witnessing so many political disappointments, nor slowed by his son's public lambasting, he spoke not about film but life. The struggle was not just yesterday and today, but tomorrow and tomorrow. Defeat was no excuse for retreat; past frustrations did not forgive current lack of involvement; the overwhelming odds and staggering blows to democracy in no way justified a lessening of progressive activities, but instead demanded a deepening militancy from us all.

At the end he made a simple, passionate statement, and to the depths of my soul, I understood what he was saying: that when all is said and done, the only thing we can each really do is take our own stand.

Not asking or demanding, not apologizing, lecturing, explaining, justifying, or pleading, but simply reaffirming his lifelong commitments, Haskell Wexler ended his remarks by simply saying, "If I am an artist, I am going to do something about this turn to fascism!" That was all, nothing more, and that was enough.