Can the WWE make an action star out of Dean Ambrose? 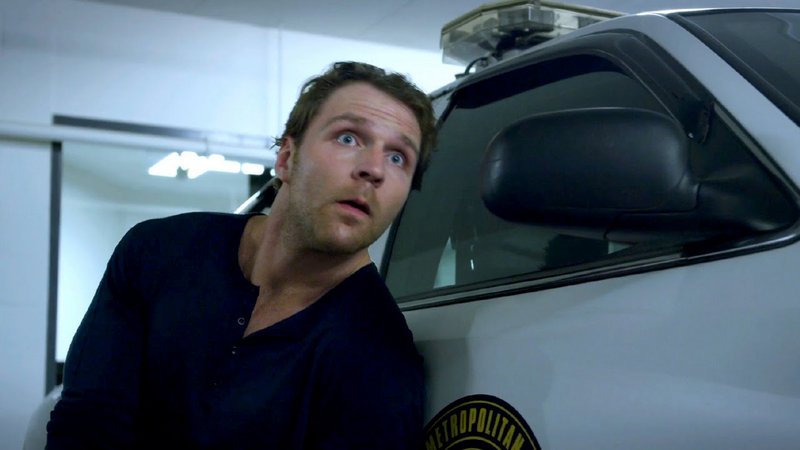 "Wait, you put me in a film? And made me the lead? And I thought I was the crazy one." WWE superstar Dean Ambrose gets his shot at being WWE's cinematic franchise player with 12 Rounds 3: Lockdown.

The best wrestlers are some of the most rounded performers on the planet. Within the squared circle, they develop a character, choreograph fights, be both lead actor and stunt double, and deliver improv comedy in front of thousands. So it's no surprise that the WWE, the world's biggest wresting promotion, wants a slice of the action movie pie.

Go back and watch seminal wrestling documentary Beyond the Mat: in it, WWE CEO Vince McMahon clearly stated that his long-term plan was to get into movies. So far, it has to be said, he's not done a bad job. There have been a couple of good acquisitions (2012's post-apocalyptic horror The Day is a sadly overlooked little gem, and haunted mirror shocker Oculus is creepy, movie-night fun). Yet mostly it's been the simple equation of putting WWE superstars (McMahon hates the term wrestler) in a lead role, and roll the dice on either a dopey comedy or a mid-Eighties style hard-hitting action flick.

If there's one thing McMahon can do well, it's recognize charisma. After all, that's a big chunk of what modern professional wrestling – or even the WWE's version, dubbed sports entertainment – requires. The best performers can go out and not just work a five-star match, but stand in front of an audience of 100,000 and have them on the edge of their seat with their words. In that regard, McMahon has a better track record than most studio executives: He ignited a legitimate crossover star in Dwayne "The Rock" Johnson with the Walking Tall remake, and John Cena closed out 2015 with some great notices for his self-deprecating comedy chops in both Trainwreck and Sisters.

And yet a homegrown action hero has eluded the WWE. They've tried so hard, but Steve Austin (The Condemned) was too old and beaten up to leave his comfortable retirement; Randy Orton (The Condemned 2) has the personality of a fence post; and Mike "The Miz" Mizanin has already sunk into bad comedy territory. They've had slightly greater success with horror, as Kane (aka Glen Jacobs) made Jacob Goodnight into a reasonable second-tier slasher in the See No Evil franchise.

However, they do have their franchises lined up, and they keep dropping their chosen stars in there, in the hope that one will click. No one is replacing Kane as their horror guy, so everyone's lined up for either the next The Marine sequel (IV just finished shooting) or the 12 Rounds series. Now it's the turn of Dean Ambrose to take a shot at cinematic success.

The franchise gimmick is simple: 12 obstacles, a la Hercules, for the hero to solve and survive. With part one (headlined by Cena) and part two (Orton), the hero was set a series of puzzles by the villain. Of course, each film needs a new twist, or the gimmick gets stale. So this time, Ambrose plays a cop on the run with only 12 bullets in his gun.

Thing is, he doesn't have far to run. He plays Shaw, a burnt-out cop barely back on duty after his actions lead to the death of his rookie partner. On his first day back, he's already overshadowed by departmental superstar Burke (action TV regular Roger R. Cross of 24, Arrow, Continuum, and The Strain). The audience already knows that he's not exactly the heroic type because a) Shaw mistrusts him and b) he murders a guy in the first five minutes.

Seemingly just to be a bit of a passive-aggressive dick to his former partner Burke, Shaw checks a mystery flash drive from the crime scene out of evidence, and finds that mister cop of the year isn't exactly the squeaky clean hero everyone expects. That's when all hell suddenly breaks lose, as Burke seals the building, gets everyone else out, and goes hunting for Shaw.

Dedicated wrestling fans will find a degree of humor in the infamously borderline technophobic Ambrose even recognizing what a flash drive is, and will probably nod in sage recognition when he, at a later point, just randomly starts pulling wires out of a wall. Now that's the Ambrose we all know. The weird, jittery, laconic, nihilist yet moralistic Ambrose, the kind of guy that deserves something a little better than a cut-price Die Hard 2 knock-off.

This is the smallest film of the franchise, abandoning high explosion setpieces for a bottle drama. Co-writers Bobby Lee Darby and Nathan Brookes should have been perfect for this, since their script for the Soska twins-helmed See No Evil 2 kept the action locked in one morgue on one night. However, director Stephen Reynolds is simply here as a competent pair of hands, so there's little to drag this above the standard midcard WWE product.

That's the big problem for wrestling film fans. We know that there's some weird potential in Ambrose somewhere, But he's given so little to do, it's hard to say if his future is as tough guy No. 2 or a more muscular Walton Goggins. But there are at least some flashes of the weird, wired charm that became his in-ring signature. There's the moment when Brooke pushes too far, and here comes psycho Dean, the self-proclaimed lunatic fringe. This is a guy who, for his wrestling day job, has a T-shirt that's just a picture of himself and the words "Does it look like I have a plan?"

At least this will prove to the non-wrestling audience that he knows how to handle a fight sequence. Before he joined the WWE, under the ring name Jon Moxley, he was a major talent on the independent wrestling scene, and some of that time was with the notorious Combat Zone Wrestling. That makes his brawling a little more credible. It also makes some of his injuries seem a little more convincing than the average action hero. Ambrose acts like someone who knows what it's like to get punched in the face – because he has been. His job is to sell injuries convincingly, so when he gets shot in the arm, he goes "ow." If that seems like he's shaking it off, then I'll probably take the word of a man that's been stabbed in the forehead with a fork during a barbed wire and steel chair match over that of couch-bound action purists.

Hitman: Agent 47 (20th Century Fox) There's a great movie to be made from the subversive, sneaky assassination game franchise, and this sure as hell isn't it (read our full review here).