A new Robinson Crusoe given extraordinary life in low-budget British SF drama Reconnoiter, which debuted in Texas at Other Worlds Austin this weekend.

It seems pretty gauche to talk about a movie's budget and production. But once in a while a film appears that it's hard to believe that it was made on no resources. When it happens, as with British sci-fi drama Reconnoiter, it's a testament to the filmmakers' grit and creativity.

Receiving its Texas premiere on Friday as part of Other Worlds Austin, Reconnoiter focuses on a pilot (Ian Rowe), sent on an exploratory mission: In the fairly near future, the recieving end of a teleportation system finally arrives at its destination, an Earth-like planet 20 light years from his home. His job is to zip through the device, orbit twice, and head back home. However, nothing is that simple, and he ends up crash-landing on a world where the only inhabitants seem to be humanoid and canine robots.

At first glimpse, this seems like a modified Robinson Crusoe in Space, but there's something deeper, more mournful here. Rowe doesn't feel like a hero: He feels like a man sent on a job, a pragmatic pilot of the stoic English extraction. The technology around him, while futuristic, is recognizable: His ship has hints of NASA's Orion rocket and SpaceX's reusable system, while the robots clearly share digital DNA with the designs emerging from Boston Dynamics. It makes the world feel grounded and recognizable. At the same time, the wilds of Dartmoor National Park – windblasted, storm-shrouded, historically the cinematic preserve of Hammer Horror – are rendered oddly alien.

What makes this more extraordinary is that the whole endeavor is created by a core team of three people: Rowe; his brother, writer/director Neil Rowe; and Neil's wife, producer/composer Amanda Rowe. What's truly amazing is that they combine just enough real-world artifacts (the pilot's uniform looks assembled from a well-stocked military surplus store) with some of the best home-drawn CG (by Neil Rowe and Gareth Knight) since Neil Blomkamp's game changing short, "Tetra Vaal." And what's best is that, throughout, this is a story with a complicated moral about the unexpected consequences of best intentions.

Thoughtful and ingenious, Reconnoiter is reminiscent of the equally ambitious Coherence, in that it is a testament to the limitlessness of ideas. The setup, of a man caught in a war of machines, could have turned into a low-budget Terminator. Instead, as the pilot finds slivers and hints of the real nature of this tragic new world, it builds to a moving and elegiac resolution.

For more on Reconnoiter, visit www.reconnoitermovie.com. 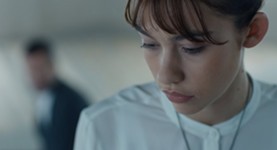