There aren't many films that have you from the first frame, the first note, the first word. But Sion Sono's hip-hop musical Tokyo Tribe is a two-hour fountain of crazy, unapologetic, wondrous musical mayhem. It's easy to lose track of Sono – or rather of individual works. This year alone he is set to release a half dozen movies, and one gruesome sequence from the upcoming Tag is already a meme-ified gif. But the sheer toe-tapping joy of his adaptation of Santa Inoue's manga is a hip-hop remix of The Warriors and Tokyo Gore Police, all wrapped up with a House Party bow.

After a block-rockin' debut at Fantastic Fest 2014 (earning it a slot on my list of "Top 10 Festival Films You Haven't Seen Yet"), the audience was left nodding its head to the eternal beat, "Tokyo Tribe, never ever die." The movie throbs and pulsates from its first dropped beat, set in a Tokyo that strips away all the tradition and history and commerce, and fills the gap with the neon-drenched counterculture. This is a city run by street gangs, each emulating a different kind of hip-hop, each representing a different Tokyo neighborhood. The heroes are the love-and-peace B-Boys of Musashino Saru, who just want to hang out and spend time with their friends and rap to each other.

The beats don't stop until the action enters the realm of Lord Buppa (Riki Takeuchi, Big Man Japan), a gangster in the most deranged sense of the word, a cigar-chewing, finger-lopping, dildo-wielding, butcherous maniac who secretly runs the most dangerous of all the street tribes. At this point, just strap yourself in, because it's an all-out war as their Daisy Age enclave is threatened by the violence that rules everywhere else. Or will our heroes win out, and unite the tribes?

Hey, this is a musical, so don't count out the good guys.

And a musical it is, in its roots and bones. The music rarely stops, only breaking in the first half hour to allow room for some epic crazy beat-boxing from the most unlikely source. Daisuke Sôma's joyous, swirling cinematography evokes both Andrew Laszlo's fantastical work on Streets of Fire and Daniel L. Fapp's grounded but epic view of New York City in West Side Story. It helps that Sono gives him a lot to work with, assembling his alternate world from Tokyo's real life craziest locations (seriously, a trip to the Robot Restaurant is well worth every yen), and casting real Japanese rappers that can freestyle through the increasingly bonkers plot.

Sono's world, as always, is filled to the brim with cinematic references, remolded in the forge of his firey imagination. Even if all the Asian cinema references may fly over heads, nods erupt to a host of Western films (Big Trouble in Little China, A Clockwork Orange, Escape From New York, and a grandma DJ reminiscent of Clevon Little's omniscient DJ in Vanishing Point). Then there's his own deranged imagination, including throwing in a foul-mouthed, magical gangster overlord called the High Priest.

As always with Sono, this is lewd, lascivious, loud, and will require you to suspend your disbelief from high-tension wires. But what makes this most fun is that the film both embraces the silliness and critiques it. This is otaku in reverse, with Japanese street kids embracing the fantasy presented by American hip-hop. And yet, in this retro-fantasy, he also injects a critique of the literal and metaphorical dick measuring in any gang culture. Plus, at the end of the day, this is the best primer to actual Japanese hip-hop you'll get this decade.

Tokyo Tribe (XLrator Media) is out now on Blu-Ray. Also out now: Ghost Story (Scream! Factory) remains one of the most extraordinary final blasts of dry American Gothic terror. Released in 1981, within a year its sense of dry dread was buried forever under the epoch-changing thrill ride of Tobe Hooper's Poltergeist. Yet there's more than a little spooky dread to keep its spirit alive. At the time, it was memorable for having some genuine cinematic legends – Fred Astaire, Melvyn Douglas, Douglas Fairbanks Jr., and John Houseman – telling a simple tale of a haunting. But there's a lot more chains to be rattled than that. The four old gentlemen begin by bemoaning kids today as they sit around swapping ghost stories (shades of the grandmaster of ghouls, M.R. James.) However, there is darkness to their own creation, as shown as all four are crying and whimpering in their respective beds. There is a buried truth in their past, one that emerges in a series of interlocking reminiscences. They are caught in their own ghost story, centering around a mysterious woman (the first U.S. performance by Alice Krige) and a terrible crime.

The only disappointment here is that so much of the story focuses on Craig Wasson in a double part as Don and David Wanderley, sons of Fairbanks' character. It's not that he's bad, it's just that director John Irvin (fresh off directing another screen icon, Alex Guinness, in the TV adaptation of Tinker, Tailor, Soldier, Spy) could have given so much more time to this incredible quartet.

However, the mad powerhouse at the middle is Krige's banshee wail as the wronged spirit. She gives the ghost some real life and motivation, making her more than just (some surprisingly gruesome) special effects. We're guessing Nicolas Cage just wore what was in his wardrobe that day for Pay the Ghost.

Staying with the other world, Pay the Ghost is more proof, if proof be needed, that there's something weird going on with Nicolas Cage. No, not just that the former godfather of extreme acting is trapped in the limbo of direct-to-video dross. It's that sometimes, there are flashes of the crazy, talented bastard that we love. And we're not talking about his Oscar-worthy turn in Joe, or the underrated revenge drama Rage, but the guy who loves making off-the-wall supernatural horrors like Ghost Rider, Season of the Witch, and Drive Angry.

Pay the Ghost definitely falls into that category: In it, he plays a New York academic with a happy marriage (to Sarah Wayne Callies, who proves you've got to do something once you've been disemboweled on The Walking Dead) and a son (Jack Fulton) that he loves but doesn't see enough. When the boy disappears on Halloween in the middle of a street parade, his father descends into madness, convinced that his son is one of thousands that have been taken by spirits. One phrase – pay the ghost – crops up time and again, making him think he has found a way to pierce the veil between worlds.

That Cage picked this material is less bizarre than the fact that it was directed by Uli Edel, responsible for serious art-house fare like The Baader Meinhof Complex, Last Exit to Brooklyn, and seminal Berlin heroin drama Christiane F. However, as oddball, low-budget, and straight-to-VOD as this is, there are flashes of excellence, including one shot that is truly haunting. Plus, no one embraces illigical like Cage. It's no Bringing Out the Dead, but it's definitely more a heartfelt B-movie in the vein of Knowing than a total The Wicker Man misfire.

Uncanny completes a similar circuit to Ex Machina, but use ingenuity to supplement its budget components.

There's a ghost in the machine in Uncanny (Image Entertainment), a three hander that tackles similar questions of humanity and machinery seen this year in the much more lauded Ex Machina. However, there are ways that this film, for all its budgetary restrictions, may well be the smarter of the two: for example, it actually knows what the Turing Test is. David Kressen (Mark Webber) is a boy-genius researcher who has been off the grid for years, and coder-turned-reporter Joy Andrews (Lucy Griffiths) has been sent by their mutual boss to interview him about his revolutionary invention: a fully functioning android called Adam (David Clayton Rogers). The three become engaged in a shifting cauldron of tension, as Adam feels rejected and belittled when he sees how his creator interacts with a real human.

Probing questions of humanity, parentage, and rivalry, it feels stylized but never forced, and swaps the murky sexuality of its bigger budget sibling for a more glacial ruminations (for an interview with director Matthew Leutwyler, read "The Future is Uncanny," Oct. 14.). 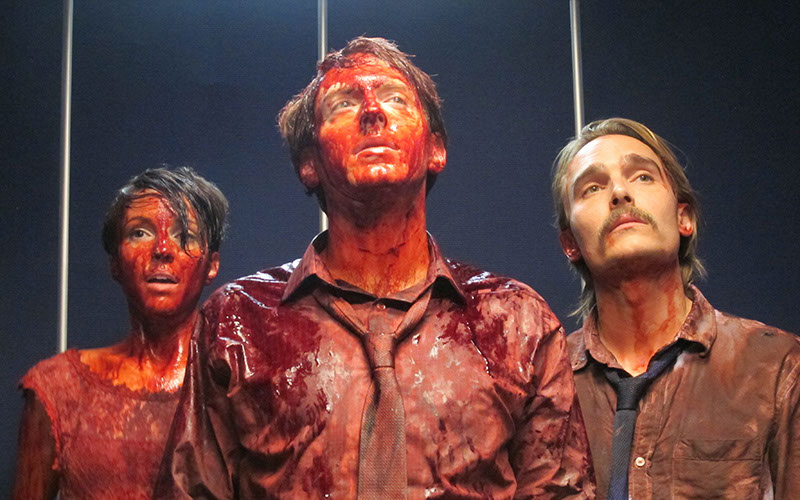 From ghost in the machine to cog in the system: a quick note about Bloodsucking Bastards (Shout! Factory). It's a return to genre subversion for Fran Kranz (Cabin in the Woods) as a workplace drone who suddenly finds himself a) dumped and b) losing out on promotions to the vampires that work in his telemarketing firm. Office comedies are the ultimate sealed-bottle drama, and live and die by energy and charm, which this has in droves. It's not a big-budget or overly aspirational affair, more akin to the comfortable humor of 2010's aliens in the workplace comedy Drones than The Shop on the Corner, but there are more than enough sly giggles and jabs at corporate culture to fly past (for an interview with the star, read "Fran Kranz vs. the Bloodsucking Bastards," and read our full review here).