It's strange news for film fans: I Luv Video, one of the nation's last remaining VHS, DVD, and Blu-ray rental stores, is closing its Guadalupe location near UT, and consolidating its stock to its surviving store on Airport Boulevard. End result? The owners say it will be the biggest video store in the world. 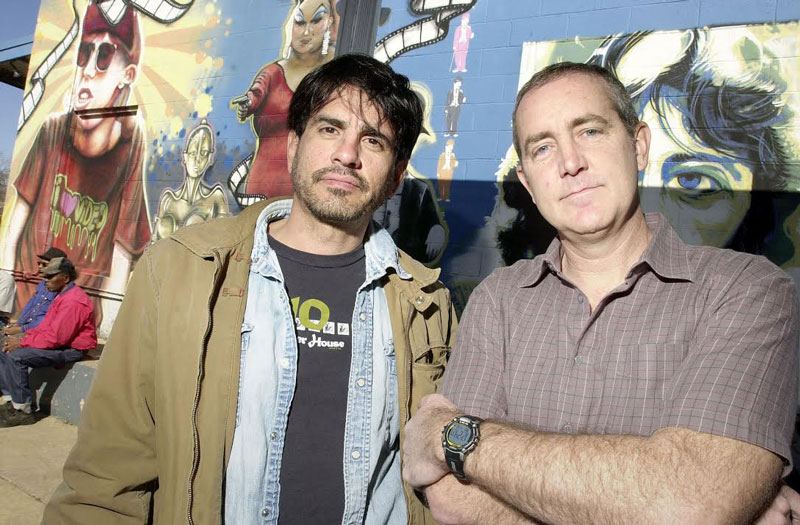 The Daily Texan broke the news earlier today, much to the surprise of co-founder Conrad Bejarano. He said, "How did everyone know so quickly that we're closing this store down?"

In some ways, it's no surprise. There's been a For Lease banner on the lot the beloved store shares with EcoClean on the 2900 block of Guadalupe for several months now. Guadalupe has increasingly become a difficult location for independent and even chain stores without the words "UT Co-op" or "Urban Outfitters" in the name. However, I Luv Video is not being pushed out by rising rents. "That's the advantage of owning the real estate," Bejarano told the Chronicle.

Founded originally in the mid-Eighties at Dobie Mall as London Video by Bejarano and John Dorgan, I Luv Video first opened the doors in 1984 on Slaughter Lane and Manchaca Road. At its peak, it had nine locations around Austin, but eventually pulled back to the two (now one) remaining sites. Over the decade since the firm acquired the Guadalupe location, Bejarano said that he has been offered massive fortunes to just sell up the entire block (which also includes Spider House Cafe and the Spider House Ballroom) and have it all be demolished to make way for a development. However, he consistently said no.

However, about a year ago, there was a warning sign about the Guadalupe location. He said, "Free Beer Tuesday wasn't getting good attendance. If you can't give away free beer, and the Airport location is going through a keg in a couple of hours …."

The root problem was parking. The location provided communal parking for all four businesses, plus Buffalo Exchange, Trudy's Tex-Mex, and Milto's. Bejarano said, "We're too much of nice guys to say, 'Hey, you can't park there.'" That was a problem because "the video industry has always been in-and-out." No parking means no in-and-out means no rentals means no business.

Bejarano started running the numbers, and decided that between the mortgage and property taxes, it just was not viable to keep Guadalupe open. So this week, he finally pulled the plug, and he is currently looking for potential tenants and collaborators.

However, for all the gloom and doom that's being put around the news, Bejarano is extremely upbeat.

For campus-area residents, the big news is that both Spider House and the accompanying venue will stay untouched.

Plus the takeaway for films fans around Austin is that he's a long way from quitting the rental business. Instead, his staff will be sorting through all the tapes and discs, and everything that's not a duplicate will be shipped to the Airport location. When finished, it will have 130,000 titles in stock, and he's eager to add more shelves on the second floor and along the catwalk. "It doesn't sound like it's possible," he said, "but there's plenty of room."

Still, it's a major change from only a few years ago, when I Luv Video sat just across the junction from friendly rivals Vulcan Video, with a Blockbuster a few blocks south, and the mom-and-pop Movie Store at 43rd Street. Now both Blockbuster and the Movie Store are gone (and, just as tragically, Black Lagoon Gallery painted over its iconic sci-fi mural). In 2013, Vulcan moved from its old location on West 29th Street to North Loop. Fortunately, both the north store and the south location on Elizabeth Street are still renting tapes to the masses on a daily basis.

However, that could change: The owners of Güero's Taco Bar on South Congress Avenue are eyeing Vulcan's south location as the potential site for a four-story mixed-use development. Vulcan's management has said they hope to be able to move into the new building once construction is complete.

It's undoubtedly bad, and sad news for Austin films fans. On the upside, the city still has three working video stores. And remember, the next time Netflix dumps your favorite film from its lists, it's stores like this, and Vulcan, and Scarecrow Video in Seattle, and RAO Video in Little Rock (with whom Austin's I Luv has amiable rivalries about who's bigger and older respectively) that will always have them on the racks. In fact, Bejarano expects to keep adding titles ("There are a lot of interesting B-movies that are getting released over the country and all over the world.") and is considering adding locations, with South Austin a strong contender.

Moreover, Bejarano noted that the remaining location has always done well, and – with more titles – should do even better. He said, "We're there at the Airport store for people who don't go through Netflix. They just want to go to the video store and not worry with Netflix's censorship policies or their limited inventory."

Plus, on the positive side, Bejarano said, "Now we're the oldest and biggest video store in the country."

Down With Netflix! Down With Redbox!
Saturday is Independent Video Store Day