There's self-deprecating, and then there's Onur Tukel. When the actor, screenwriter, director, graphic designer, and kids' author was called a polymath in an email, he wrote back, "A polymath is a person of wide-ranging knowledge or learning. I had to look that up, Richard, so I'm clearly not." 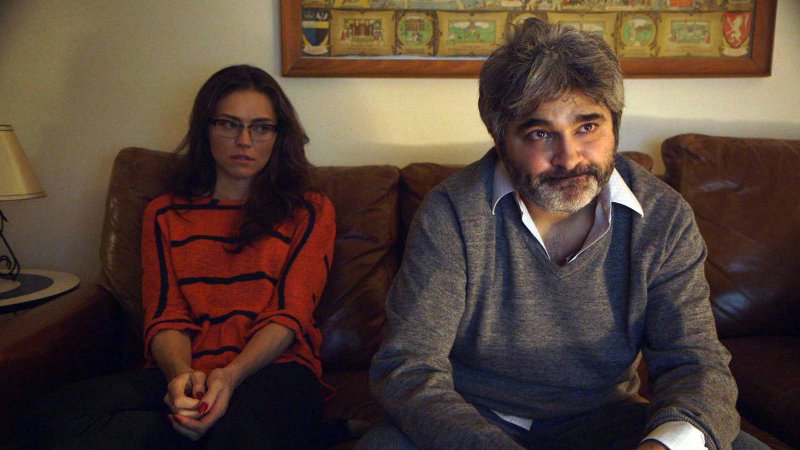 "Past mistakes will come back to you and if you're not prepared to deal with them, if you lack the awareness of past mistakes, then you're digging your own grave."
Reluctant polymath Onur Tukel (with co-star Trieste Kelly Dunn) on Applesauce

North Carolina native Tukel has been making movies since 1997's super-low budget House of Pancakes, but it was only with 2014's smart riff on the contemporary vampire tale, the New York-set Summer of Blood, that he picked up real critical attention. Now with glowing critical notices for his performance in Austin Film Festival drama Booger Red, he's released his directorial follow-up, Applesauce. In it, he plays Ron, a high school teacher in a happy relationship whose world gets turned upside down when he receives a finger in the mail. Extrapolated from a real incident in college with a slammed door and a missing digit, it's proof of the old maxim that you may be through with the past, but the past isn't through with you.

A seamless and shameless melding of low-brow and insightful, the thematic combination and the NYC location for Applesauce have raised inevitable comparisons. Tukel wrote, "A few critics have said, 'Tukel is the Turkish Woody Allen.' But in North Carolina, I was more like the Turkish Ed Wood. I still am. Maybe that's not such a bad thing."

Austin Chronicle: Your work often combines themes normally associated with horror – murder, vampirism, body horror – with comedy, but you're definitely not making traditional horror comedies. What was the inspiration for that melding, and how do you feel your work has evolved?

Onur Tukel: I loved trashy horror films from middle school through high school. When I got to college, I started appreciating more thoughtful movies, starting with Woody Allen, then moving to Whit Stillman, Richard Linklater, and all the other indie film madmen making movies in the early Nineties.

Most of my work has always been a balance of comedy and horror to some degree. In five of my eight movies, someone's getting killed or attempting to kill someone, and gallows humor runs amok. I do think growing up in North Carolina has something to do with this sense of humor. The South knows failure. It knows how to make fun of itself. But it's also proud, due to the amount of ridicule it gets from other parts of the country. But all that nature breeds a special kind of "hippie" down in NC.

AC: You've been making films for years, but SOB seemed to mark a change in your profile, with a lot of critics I know talking it up to each other. Did it feel like it changed things?

OT: I owe a lot to the American Film Festival in Poland. They screened a rough cut of Summer of Blood in 2013. Based on that screening, we were invited to premiere at the 2014 Tribeca Film Festival. The festival was fantastic. We got a huge amount of press and positive reviews. Shortly after, XYZ Films sold the movie to Dark Sky Films. Dark Sky Films funded and is distributing Applesauce. If all goes well, we'll make another film together.

So things have definitely changed. Someone's writing me a check to make movies. I'm playing festivals here and there. I'm being interviewed for great publications like The Austin Chronicle. I'd feel really great about all of this if I had any self-esteem.

AC: There's the old joke that actor/directors often cast themselves as the handsome, charming leading man, but both Erik in SOB and Ron in Applesauce are sometimes unlikable, and not always sympathetic. What attracts you to writing and playing those roles?

OT: I'm an idiot with a big mouth and I write what I know, which is nothing, but it seems to work in cinema, which has a history of casting schmucks as leading men. I can't say why I like writing roles like this. It's who I am.

I used to think I was playing the "lovable loser" role. But apparently I'm playing the "unsympathetic loser that everyone hates." Thanks a lot, Richard.

"Berndt Mader performed quite a magic trick in Booger Red, weaving real defendants, lawyers, and real events into what seems like a fictional narrative. ... I think throwing a clown like me into the mix, playing a journalist, relaxed everyone a bit."
Onur Tukel on drama Booger Red, which played at the 2015 Austin Film Festival.

AC: Applesauce is based on a real incident from when you were in college. When you're playing with something based on real experiences, like this or (much more so) Booger Red, how do you balance veracity with the need to tell the story you want to tell, knowing people may recognize themselves?

OT: Truth isn't important in Applesauce, because it's a narrative work of fiction. But the springboard of the entire movie, the "finger incident" is part of my college experience. It really happened to my friend. For years, we've discussed the implications of the event, what happened to the injured party, how their life was affected. These conversations informed the work of fiction, and that's about as far as it went.

Still, Applesauce is interested in how history can haunt the present. Past mistakes will come back to you and if you're not prepared to deal with them, if you lack the awareness of past mistakes, then you're digging your own grave.

Booger Red is interested in this idea as it pertains to the judicial system in East Texas. But there's more at stake here because innocent people went to prison. Writer/director Berndt Mader performed quite a magic trick in Booger Red, weaving real defendants, lawyers, and real events into what seems like a fictional narrative. His movie is about exposing the truth, exonerating the innocent, and giving voice to the voiceless.

I think throwing a clown like me into the mix, playing a journalist, relaxed everyone a bit. I'm harmless, somewhat ridiculous, and my silliness made the subjects laugh and took the edge off a little bit. Their pasts were traumatic and extremely painful. I was cast to help lighten things up a little bit.

As far as veracity is concerned, I don't even know what that means anymore. Is there any reality to anything? Every message delivered in this corporate culture is tainted with a profit motive. In Booger Red, seven people are sent to prison because of avarice. At least, that's what appears to be the case. It's nuts.

AC: The Applesauce script revolves around questions of honesty, deception, and how both can keep couples together or drive them apart. Why did you gravitate toward this theme?

OT: You write what you know. When I'm in a relationship, invariably I drive a wedge between myself and the girl. Whatever the reason – I'm too busy to sustain a relationship, I'm scared of monogamy, I'm scared of commitment, of the imprisonment of domestication – it's just part of my identity. I'm a coward. I'm selfish. My characters end up being selfish cowards as well. I don't think they're bad people. They're reacting without thinking things through. They're putting their own interests first, not weighing the consequences.

There's a comment in Applesauce about Rodin's The Thinker. It always gets a laugh. I wrote a children's book called Little Friends about the value of thinking. Thinking leads to empathy, which is probably the most important theme of the movie.

AC: The sequences with the kids in Ron's classroom feel improvised, but they also have the formality of a Greek chorus – which they sometimes feel like for him. How did you approach those scenes?

OT: I shot the classroom scenes on the last day of production, about two weeks after principal photography wrapped. This gave me time to figure out what the hell I was going to shoot. We had about 18 extras who showed up to be our students. I had about 10 pages of random dialogue scripted to give to the students. I figured if they were nice enough to show up and be in this for free, I could give each person a line or two to say. A lot of it didn't make it into the final movie, of course, but it really did keep the actors engaged.

I would ramble in front of the class, based on speeches that I had loosely prepared. I was reading Morris Bergman at the time and his writing is illuminating as it is terrifying, so he was informing all the stuff about the AJAX Iran coup of the Fifties. I would be up in front of the class, rambling, not quite knowing what I was talking about, and then I'd point to a student and have them bark their dialogue at me. It was a bit unstructured but the hope was that it would truly feel real.

It was also tons of fun because the kids were really engaged. I tell you, 18 young actors in a classroom setting gets you a lot of production value. Plus, I owe a lot to Our World Neighborhood Charter School in Queens for letting us shoot there on the weekend. I think we shot 20 script pages that day. A nice way to end the production and start the new year!

Applesauce (Dark Sky Films) is out now on DVD, Blu-ray, and VOD.