Why do writers have such a tough time writing female action leads? It seems like we should be well past the era of the damsel in distress, but the genre seems to fall back on the helpless heroine more than it does the image of outgunned but resourceful. Where's our Jane McClane, goddammit? 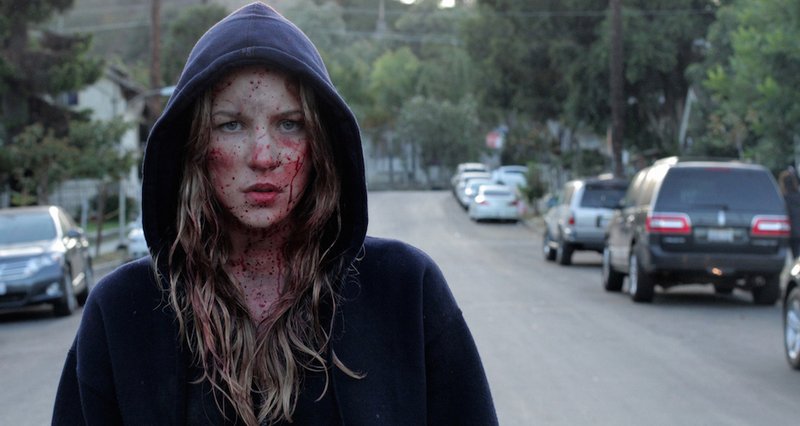 You've got bloody revenge all over you: Eve (Tina Ivlev) is Bound to Vengeance.

Case in point: Bound to Vengeance, a movie whose release timing could not be more unfortunate. Brie Larson's Oscar-touted performance in Room has redefined the kidnap survival drama as something more than the domain of psychological horror enthusiasts (cf the challenging and discomforting In the House of Flies). Now this story falls straight back into the standards and conventions of the genre.

It also fits into the always unsettling rape revenge genre, a murky swamp that will always be open (and often rightly so) to accusations of exploitation. The progenitors – I Spit on Your Grave and Last House on the Left – are still intensely debated, dissected, and eviscerated to this day. It's less likely that, half a century from now, cineastes will similarly pull apart and divide over the adventures of Eve (Tina Ivlev) as she escapes the vile imprisonment to which she has been subjected.

What distinguishes Bound initially is Byron Werner's cinematography. The opening narrative – split between Eve's desperate attempts to escape capture and the found footage gimmick of her boyfriend's cellphone memories of a day at the funfair – has intriguing moments and odd visual pay-offs that speak to low-budget ingenuity. That's something Eve has in spades, too. When she overcomes her captor (Richard Tyson), she seems like the final girl. Then he plays his trump card: She can run away and be safe, or she can rescue all the other women he has imprisoned in other houses.

And the first glaring plot hole emerges. Why doesn't it dawn on her to call the cops, instead of attempting to undertake a solo rescue mission with him as her prisoner at the end of a jerry-rigged catch pole? But clearly, it's not going to be that simple. The script by Rock Shaink Jr. (side point: if that's not a nom de plume, then it's the best name ever) attempts some depth and darkness, with each rescued woman effectively a different trap due to the damage he has inflicted on them: Stockholm Syndrome, Martyrs-esque insanity, and even Eve's own survivor's guilt. It's a deep, dank trip into a nihilist world of botched revenge, that unfortunately has neither the visceral heartlessness to be truly exploitative, or the grisly morality that a true tale of vengeance requires. As for the third-act reveal (if it can be called that), it's horribly telegraphed, and then even more horribly undercut by a dismal closing musical cue.

But if we're talking visceral reactions, there's going to be the same gut punch excitement that comes from seeing any female lead get a chance to overcome her male oppressors. True, that's the emotional button upon which the genre depends, but if you're happy to have that button pressed, then this does that better than most. A lot of that hangs from Ivlev's performance, because she makes Eve tough, but not a superhero. There's never the "tank top girl" moment that plagues the form, and that's a big plus. That, and the final act of vengeance, with shades of the queasy emotional void of Proxy, is more cerebral than the form usually manages. Kelly (Kaya Scodelario) gets ready to pull the trigger on her survival plan in Tiger House.

By contrast, UK/South African co-production Tiger House is a much simpler and morally clearer affair. Kelly (Kaya Scodelario, Skins, The Maze Runner franchise) sneaks into her boyfriend's house one night. Theirs is a class-riddled and star-crossed romance: He's university-bound, but his parents see this supermarket checkout assistant as a distraction to his promising future. Plus, he's a little bit of a putz, having accidentally shot her with a crossbow bolt.

That's when everything turns sour quickly. A gang of masked raiders break in, taking the family hostage – all except for Kelly. After all, she was already hiding from her potential mother-in-law, so there is no reason why the invaders should know anything about it.

It's not hard to see the influence of the decade's defining home invasion movie, You're Next, with Kelly as a second cousin to Sharni Vinson's cornered heroine Erin. But where that film subverted the established tropes of the family holiday flick with an intrusion of gore, Tiger House is a lean, mean, mouse-hunt machine. Like Eve, Kelly avoids being an unrealistic badass by a plausible balance of fight-or-flight responses. There's suitable panic in her eyes every time she confronts the gang, and the film keeps it convincing that the only reason she stays alive is that she hits first, not hardest.

What really makes Tiger House stand out from the low-budget crowd is its fearless dedication to the sealed bottle trope. It's not as overt as, say, Joe Lynch's new pizza-and-beer classic Everly, but then it's never aiming for Lynch's sense of gonzo fun. Here, the camera never gets further than the front drive, giving a gorgeous sense of controlled claustrophobia. It's accelerated by the tension between two of the assailants – Dougray Scott as the retired soldier with a certain sense of honor among thieves, and Ed Skrein as his wayward ward, too eager to hit the kill switch.

As with Bound to Vengeance, there are twist betrayals, but they somehow seem more plausible and less gimmicky, less like a narrative "gotcha!" moment and more dependent upon all the characters being caught in a situation outside of their control. It's imperfect, and you have to wonder why perennial upper B-lister Scott isn't getting meatier roles. But, as with the best sealed bottle movies, it makes a virtue of its limitations.