What is the Process? After 100 minutes of Sympathy For the Devil: The True Story of the Process Church of the Final Judgment, you may not be too clear on the details, but that may be the point. 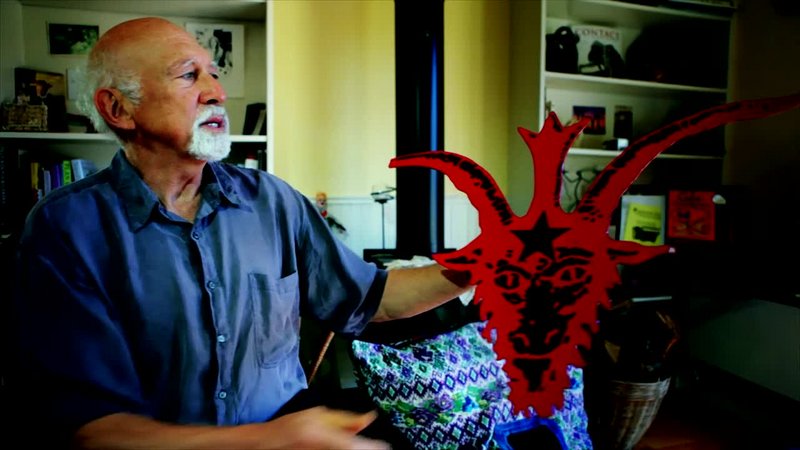 Please allow them to introduce themselves: Peace and love meets occultism and aristocracy in Sympathy For the Devil: The True Story of the Process Church of the Final Judgment

The simple answer is a religious cult that emerged in post-war Britain. As co-founder Timothy Wylie puts it, "Post-war Britain, my God, there was a miserable place." It's no wonder a philosophy drawing together Anglican ambivalence and post-Blitz nihilism takes such deep roots.

The question then is whether this was all just a shakedown of the rich and gullible, or a brainwashing cult in which the devotees and even the leaders brainwashed themselves. First time director Neil Edwards focuses on the core members – Satan fill-in Malachi McCormick, the affable and louche Wylie, the haunting Mary-Ann Maclean and the group's philosopher-king Robert Moor, the latter redubbing themselves the De Grimstons. The progress from architecture school dropouts to Britain's most high profile Satanists is intriguingly portrayed as a deliberate attempt to be as transgressive as possible, in an era when transgression was desirable. Moreover, it subtly reinforces that, like much of the era's radical cultural experimentalism in Britain (Pink Floyd, the Who, the Bonzo Dog Doo Dah Band), this was a game for the art school aristocrats and the lower landed gentry to play.

Edwards' portrait is of a star that burned bright but brief. The Beatles, Marianne Faithfull, future Psychick TV founder Genesis P. Orridge, George Clinton: All pass through its gravitational field and are pulled in for shorter or longer periods. Yet, like Lucifer's fall, there's a tale of collapse to be told.

The implication is that the church's real purpose was to take the tools of extreme religion – messianic devotion, flagellation – mix it with the contemporary tools of the counterculture – communal living, psychotherapy zines, band promo shots, happenings, occultism, Dennis Wheatley novels – and find the common ground of despair, self-castigation, rapture, and devotion. In that, Edwards succeeds in placing the Process within the era.

However, he glosses over how their recruitment and retention tools and techniques were so similar to the Manson family and Scientology. In fact, he completely ignores the De Grimstons' prior relationship with L. Ron Hubbard until the final act, one of several odd narrative decisions.

Without that context, it's a little hard to work out why the Process flamed out while other groups still claim tax breaks. An attempt to blame it all on misguided editorial decisions in the wake of the Tate-LaBianca murders and the Son of Sam portrays the group as supremely naive. At the same time, Edwards' fascination with their inner politics seems a little scattershot. A radical fourth act shift in topic is meant to subvert the established narrative, but just ends up being clunky.

However, his striking visual style – an extraordinary mixture of old footage, contemporary interviews, early Pink Floyd visuals, and Monty Python-esque animations – papers over some of those structural cracks. Similarly, his giddy, aristocratic subjects waffling about cosmic harmonies and spirits in Mexico are a fascinating insight into the true nature of such cults: They're designed for people that can afford them.

See www.austinfilmfestival.com for info and tickets, and follow all of our AFF coverage here.