It begins with the murder of General Patton. A one-year-old family pet, the dog's head is blown apart by a Tennessee policeman, point blank, with a shotgun. His crime? Wagging his tail and walking towards his owner, who had been pulled over for no reason. 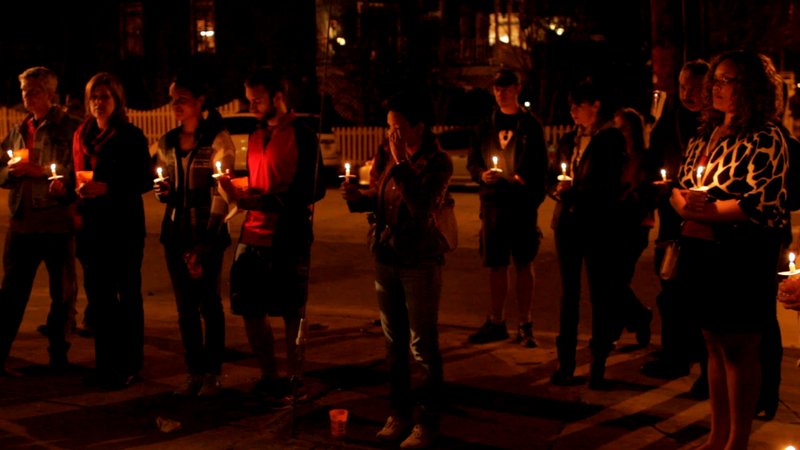 Vigil for a lost dog: Of Dogs and Men explores a rarely discussed aspect of police violence, the vast numbers of dogs shot every year.

Of Dogs and Men sheds a ray of light on an extraordinary, under-reported, and under-litigated aspect of police brutality: cops shooting dogs. If that sounds like a trivial concern compared to the #blacklivesmatter protest, the film's chilling context is that an estimated 10,000 family pets are killed every year in the United States.

As this documentary catalogs, the Patton case isn't just about the killing of one pet. It's the opening chapter for story after story after story: probation checks, accidental 911 calls, wrong addresses, false accusations. For even people who don't care about dogs, the question is: Why are so many dogs getting shot? Why would anyone think that their life is in danger from a 12-pound terrier? And what kind of person shoots a dog from behind with a submachine gun?

For people who like dogs more than people, this is the most depressing film of the year.

Of Dogs And Men is an undoubted kin and deserving counterpoint to Peace Officer, a chronicle of the militarization of the police (see Excessive Force, Oct. 8). That film's co-directors, Scott Christopherson and Brad Barber, posit that the real issue is less the equipment with which cops are issued, but the mentality into which they have been pushed. As they see the surging number of lethal SWAT raids as a byproduct of the war on drugs, Of Dogs and Men's director Michael Ozias suggests that police officers have been trained into believing that every dog is a crack dealer's pit bull. Unfortunately, as attorney Cary Hansel puts it, this is "fear-driven training, instead of reality-driven training."

If Of Dogs and Men seems a lesser film than Peace Officer, it's because it lacks a single, charismatic focus like cop-turned-investigator Dub Lawrence. However, the many faces from across the nation that take his place have a sense of optimism that the situation can change.

Ultimately, the question is of trust. Dogs trust their owners. Their owners trust the police. And the audience has little choice but to trust the dash-cams and phone camera footage of wagging, happy pets gunned down with little concern for where the bullets are flying. But there is a nugget of optimism in the K-9 units, where officers are educated to understand dog behavior.The movie's mending heart wants the audience to trust that, with the proper training, the dog lover in everyone can be allowed to flourish.

Of Dogs and Men screens again on Monday, Nov. 2, 4:30pm at the Galaxy Highland. See www.austinfilmfestival.com for info and tickets, and follow all of our AFF coverage here.