An evening with the notable "character actor"

Shortly after being presented with an Extraordinary Contribution to Film award by the Austin Film Festival on Saturday, actor Chris Cooper joined moderator Michael Noll for an hour of conversation and questions from the audience.

Chris Cooper as J.D. Salinger in the AFF film Coming Through the Rye.

Cooper, known for his roles in American Beauty, Adaptation, Lonesome Dove, and Breach (among many others), discussed his acting career, background, and the lessons he’s learned along the way. Well aware that he’s often tagged a “character actor,” Cooper’s insights about choosing roles and honing his craft subvert the idea that lead roles are more desirable or more challenging.

Cooper repeatedly touched on the idea of research and “homework,” and said he appreciated when directors trust him once he’s hired and essentially leave him alone to do his work. That’s not to say he’s against taking direction - in fact a story he shared about working with Spike Jonze proves he’s open to embracing surprise challenges during the filming process - but Cooper has learned to trust himself over the years. But during the filming of Adaptation, Jonze would request multiple takes for each of Cooper’s scenes and offer wildly different direction for each. Until he saw the film at its premiere, Cooper had no idea which takes Jonze had decided to use.

In addition to research, Cooper noted that life experience, imagination and talent are all factors in creating a solid and memorable performance. He also credited his wife Marianne - who sat in the front row at Saturday’s panel and occasionally prompted him with reminders when he started to go off track - with being his decision making partner when it comes to choosing which scripts to pursue.

Director and “grandaddy of independent film” John Sayles was mentioned more than once throughout the hour. Sayles and Cooper have worked together several times, beginning with Matewan in 1987. This was Cooper’s first major role and he called the experience “a blessing.”

Cooper also shared anecdotes about working with Meryl Streep, playing a villain in The Muppets, and winning an Oscar. Somehow all of this fell naturally into place alongside reflections of growing up in Missouri and Kansas and raising cattle as a young man. Cooper said this beginning acquainted him with hard work and helped him develop a strong sense of humanity, and though he ended up choosing a different career path altogether, these skills have clearly come in handy anyway.

Chris Cooper appears in the Austin Film Festival selection Coming Through the Rye, which screens again, Wednesday, Nov. 4, 4:30pm, at the Galaxy Highland. You can read our review of the film here. See www.austinfilmfestival.com for info and tickets, and follow all of our AFF coverage here. 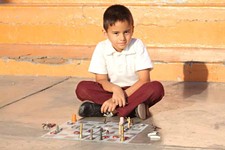