Return to the Forbidden Zone

Richard Elfman brings his cult classic to the Ritz

Whatever happened to the midnight movie? You know what I’m talking about, those super cool, super weird, sometimes rowdy, often socially or culturally or stylistically transgressive flicks that used to pack theatres to the rafters come every Friday and Saturday witching hour? It seems they’re not all that present in the present anymore. 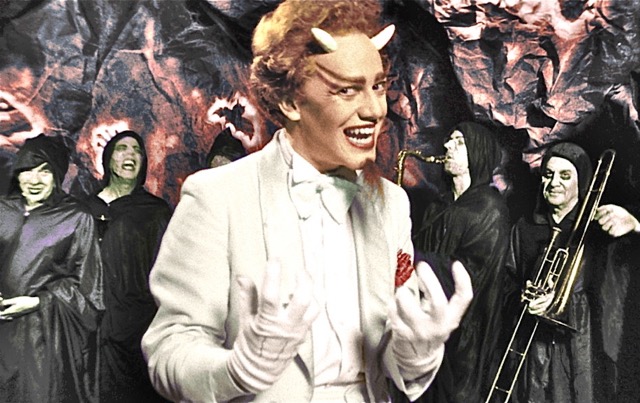 That’s where we first encountered some of the frenetic, freaky foundations of our ongoing movie l’amour fou: David Lynch’s Eraserhead, George Romero’s Dawn of the Dead, the animated, sci-fi sex/death of Heavy Metal, pretty much anything by John Waters, and the end-all, be-all of midnighters, The Rocky Horror Picture Show. The latter’s still around – will probably always be around – but the concept, the semi-illicit thrill, the very act of going to see a midnight movie appears to have faded to black in the harsh retina display glare of couch-bound YouTube views and instantaneous streaming video. To paraphrase Norma Desmond, midnight movies are still big. It’s the wall-sized, flat-screen televisions that got bigger.

Enter Richard Elfman, director of the legendary cult classic Forbidden Zone, one of the most bizarro-wonderful midnight movies ever unleashed on an unsuspecting public. He’s bringing his 1980 masterpiece of crazy to the Alamo Ritz Monday evening, Oct. 26, and while it’s not technically a midnight screening, it might as well be.

”For the Austin show,” Elfman explains via phone from his California home, “we’ll be bringing in local burlesque star Ruby Joule and Anastasia Elfman’s alter-ego Dahlia Dimant, and I’ll also be formulating the Mystic Knights of Texas Percussion Marching Band, which is myself and half a dozen guys I’m in the process of conscripting from Austin.”

For the handful of people who have yet to have their brains blown by the all-singing, all-dancing, hellz-a-poppin’ hellaciousness of Forbidden Zone, we’ll just say it stars two of the finest character actors ever to stride the Earth, the diminutive Hervé Villachaize and the statuesque Susan Tyrrell, both now sadly departed, as the King and Queen of the Sixth Dimension, into which the Hercules Family falls, amidst much unforgettable music by Josephine Baker and Cab Calloway. There is nudity, animation, Danny Elfman as Satan, and the whole insane cacophony is pure, lunatic genius. (But really, you have to see it to believe it, and love it.)

And now, 35 years after birthing the original, Elfman has begun work on Forbidden Zone 2, successfully crowdfunding the preproduction via Indiegogo. What’s more, a Forbidden Zone: Special Edition Blu-ray is due out from MVD Entertainment on November 10.

Regarding the origins of Forbidden Zone, ”It was really taking my Mystic Knights of the Oingo Boingo stage show and putting it into a film,” Elfman explains, “just as the group evolved into the rock band Oingo Boingo, which was a little bit different than our commedia dell’arte troupe. During its initial midnight shows, it was viciously attacked [for being politically incorrect]. We even had arson threats in some theatres. After that, I thought it had pretty much gone.”

”But then about 10 years ago,” Elfman explains, “I put up my first website and I got tens of thousands of hits from all over the world. Forbidden Zone had mostly gone out of distribution and so people were seeing it on bootleg VHS. But now, every month or so, I’m flown to a different city [to screen the film] and I’ve got a line of millennials around the block.”

When asked how to describe such a defiantly indescribable film, Elfman pauses before answering: “You know, it’s an absurdist film above anything else, and life is certainly absurd. It’s a funny film but more than that it has memorable music, as opposed to what I call serviceable music.”

“A good example is Chicago. I loved the stage show, I loved the film, but by the time I got to the car, the melody is pretty much mushed up in my head. That’s music that services the vehicle. Memorable music, on the other hand, just gets burnished by time.

“What I did with the Mystic Knights,” Elfman continues, “and what I did in [the original] Forbidden Zone, plus what I am going to do in Forbidden Zone 2, is to go through hundreds and hundreds of pieces of music, I find stuff that’s catchy, and it sticks. And of course, for the original Forbidden Zone, my little brother [Danny Elfman] is Mozart, so I lucked out on that count. It’s really the music of Forbidden Zone that’s made it last as long as it has. It’s timeless.”