DVDanger: Of Manos and Mosquito 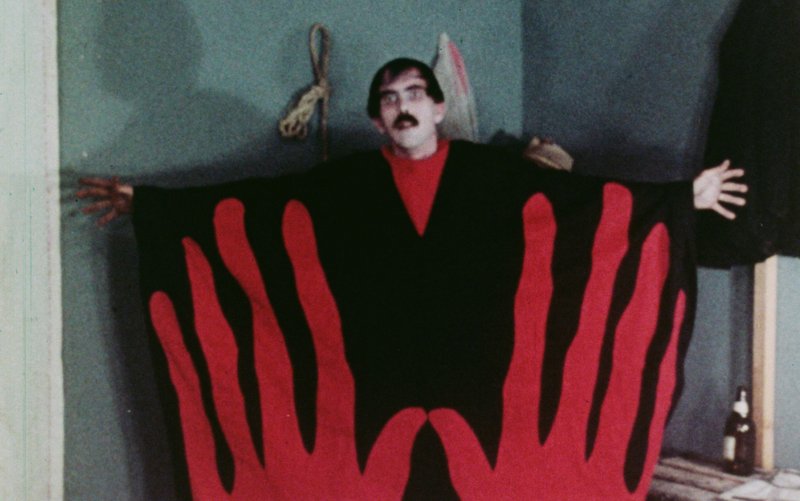 "And the fish was thiiiiiiis big."
Hated and loved z-grade curio Manos: The Hands of Fate gets a digital restoration

It is a truth universally accepted that The Texas Chain Saw Massacre was the Lone Star State's first successful independent movie. However, it wasn't its first memorable independent movie. For good or ill, that title goes to Manos: The Hands of Fate, which gets a home release after an oddly long-awaited digital restoration.

Let's cut to the chase. Manos has been called the worst film. Why? Because Mystery Science Theater 3000 and Entertainment Weekly dubbed it so.

Is it? Well, that depends what you mean when you say "film."

Spawned in El Paso in 1966, on a $19,000 budget by a manure salesman with a 16mm camera that often ran out of film mid-shot … well, those are it's strong points. Manos follows a family into the West Texas desert on vacation, where they accidentally end up in the clutches of the Master and his loyal, twisted servant Torgo. Designed as a riff on both Sixties occult obsessions and a drive-in revamp of Dracula, its inadvertently hallucinogenic vibe is pure accident, but oddly enthralling. Everyone stares at the camera for a few beats too long, and then turns away to deliver lines. A menacing dog turns up, but even overdubs cannot hide the fact that it's just really glad to see everyone. The Master (clad in a home-painted kaftan and sporting a spectacular mustache) tries to menace his harem of enslaved, undead wives, but just ends up bickering with them, before storming off. Honestly, the only reason the set doesn't wobble is because the movie was too cheap to build one.

When we're talking about cheap films, the tendency is to just write all of them off as low-budget and have done with it. But that's like saying that, since dogs have four legs, and dogs are animals, all four-legged animals are dogs. There's low-budget, micro-budget, misspent budget, but all of those imply a certain degree of professionalism. That's something that's sorely lacking in Manos, a film made by people who seemingly have had the concept of cinema explained to them by a friend, but are still a little loose on the details.

Please, don't get the impression that Manos is actually any good. Dear Lord, no. At every measurable level, it's pretty terrible, and the surviving cast and crew interviewed for the included documentary Hands: The Fate of Manos aren't eager to defend it as a classic, or even particularly watchable.

Yes, there are moments of startling ineptitude. Writer/producer/director Harold P. Warren was a triple threat only to himself. Cinematographer (and I use the term extremely loosely) Robert Guidry doesn't seem overly bothered by composition, framing, lighting, or (in several key sequences) focusing. The performances, save for set dresser Tom Neyman's exasperated turn as the Master, are uniformly terrible. Or they might be fine, but the decision to redub everyone's lines in postproduction seems misguided. That said, having the young daughter seemingly re-voiced by a 90-year-old man mumbling through a bucket will stick with you.

But those criticisms are only fair if, and only if, Manos was a real film. It's not. This is the amateur dramatics of moviemaking, and that's why Warren is no Herschell Gordon Lewis or Doris Wishman. Judging it against the standards of mainstream movies is pointless. It would be like going to a small local production of Grease in a community theatre and complaining that it doesn't have Broadway production values.

And so what if MST3K didn't like it? They're the mean kids of fandom. If I'm watching a bad, old movie, give me a Svengoolie or an Elvira any day of the week. At least they appreciate a little bit of effort.

Instead, watch it as Warren did: as a fun little weekend excursion that somehow produced a 16mm home movie. Viewed through that lens, it's actually pretty entertaining, although often inadvertently. The Master arguing with his wives becomes a bizarre sitcom version of The Brides of Dracula, the Gidget-ish couple who turn up to make out in a car at inopportune moments are gloriously baffling, and as for John Reynolds as the master's assistant Torgo, it's an oddly memorable performance from the actor, who died soon after shooting completed. It's one of those weird gems, like Earle Edgerton as a sideshow maniac in 1970's Carnival of Blood (available through Something Weird Video), that leaves you wondering, "Was this a secret acting genius, or just some guy that was perfect for this very strange moment?"

That said, absolute full marks to Synapse Films for a restoration that is the zenith of turd polishing. Every bad cut, under-lit frame, and reel end is there in all its magnificent glory.

That's not their only restoration this haunting season that will appeal to fans of z-grade legends. Like Manos, 1995's Mosquito has a peculiar position in cinema history. It's not just that it was the latest in a long wave of attempts to resurrect the classic Fifties monster movie. It's that it actually pulled it off. That said, not in the way fans of Black Lagoon-dwelling amphibious humanoids or Metaluna's mutants necessarily wanted.

Even though it was released in cinemas, Mosquito gets the plaudit of being the defining SciFi (now SyFy) Channel movie. Remember, this was the mid-Nineties, when drive-ins where dead, mom-and-pop video stores with deep back catalogs were being cannibalized by the hits-only leviathan of Blockbuster, and access to schlocky fun was limited. So Mosquito was a determined effort to bring back the gooey joys of giant bugs, adding in modern stop-motion and some pretty delicious gore.

The opening sequence promises something quite deliciously queasy, possibly akin to the Chiodo Brothers' much-loved Killer Klowns From Outer Space. A UFO crashes in a forest, and a three-fingered arm (shades of War of the Worlds) lolls out, only to be dined on by a passing mosquito. As movie science has proven, the inevitable effect is giant mosquitoes, sucking the bloody life out of anyone whom they chase.

Sadly, the rest of the film never quite delivers on the cheesy thrills that scene promises. Yet most of the classic monster flicks on which it is riffing were as good as the theatre lobby cards promised, so that's one extra point for authenticity.

It could be argued that this is the thin edge of the wedge that lead to the worst of what SyFy has become (cough Sharknado cough). There are lousy special effects mixed with cool moments, wooden acting, and stunt casting (look out for Gunnar Hansen, aka Leatherface, as a hippy-looking survivalist, and the Stooges' guitarist Ron Asheton trying to choke everyone in bug spray).

Honestly, it's no more or less of an oddity or curio than Manos. Like its older, more inept relative, you can see where corners were cut, such as a campsite massacre only seen in its aftermath. It's also oddly joyless, with no cast member seeming to know whether they're supposed to play this straight, or bite hard into the hamminess of it all.

But the giant mosquitoes are great, the violence is more gross-out fun than the genre normally allows, and Steve Dixon (as meteor researcher Parks) is a better than usual addition to the ranks of doom-saying scientists.

Mosquito and Manos: The Hands of Fate are out now on Blu-ray and DVD from Synapse Films.

Come back every Tuesday and Saturday through October for new DVDangers with the best and worst horror releases for your Halloween viewing pleasure.