Old Western horror with the Six Feet Under star

Western heroes need a sidekick. Every Rowdy Yates has a Wishbone, every Hopalong Cassidy a Windy Halliday, every Sheriff Chance his Stumpy. In revisionist Western Bone Tomahawk, it's clear Sheriff Franklin Hunt (Kurt Russell) would be half the man he is without his back-up deputy Chicory (Richard Jenkins). 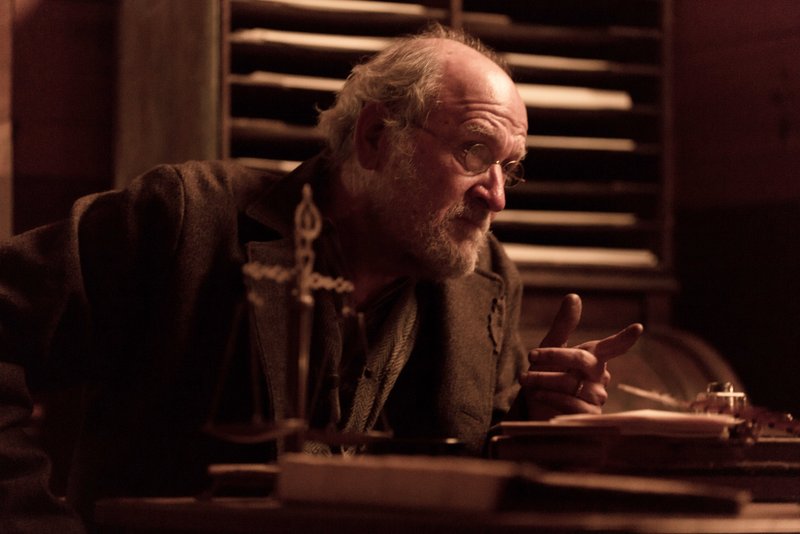 "There's a real honesty about him, and a goodness."
Richard Jenkins as Chicory, "the moral center" of Western horror Bone Tomahawk. (Image courtesy of RLJ Entertainment)

Best known as the ghost of Fisher family patriarch Nathaniel in Six Feet Under, Jenkins recently picked up an Emmy for his heartbreaking turn as Henry Kitteridge in Olive Kitteridge. After those intimate character pieces, the blood and guts of Fantastic Fest 2015 closing title Bone Tomahawk seems like a brutal change of pace, more akin to the wilderness horror of a Cannibal Ferox. In it, the peace of a small frontier town is shattered by troglodytes so merciless and brutal that even warriors avoid them, and a handful of residents face certain doom to rescue their loved ones. Jenkins said, "People keep telling me it's The Searchers meets The Hills Have Eyes – I don't know, I've never seen The Hills Have Eyes – but there's nothing in it that's supernatural. Nobody walks through walls. This lost civilization, these people could be out there."

The film's tone is somber and merciless. Yet when it comes to the sweet-natured Chicory, the reference is Dennis Weaver's career-launching career as Chester, the limping assistant to Marshall Matt Dillon in Gunsmoke. Jenkins said, "He's an old version of Chester, so adoring of the sheriff, a little bit weird, and a real character."

When Chicory first appears, he's as much Hunt's pet as his friend, the kind of man that the Old West will chew up and spit out. Jenkins' initial response when he read the script was simple. "He's going to get it first (but) I was hoping he would keep going, because the first scene, where he eats the soup with the sheriff, I was like, 'Are you shitting me?' It was fantastic. … I was thinking, 'Please don't die.'"

That opening scene, in which the big-hearted but slow-thinking Chicory confuses soup for tea, is a minor character beat that defines him as a holy fool of the frontier. Jenkins described him as "the moral center. There's a real honesty about him, and a goodness."

Jenkins grew up in the heyday of TV westerns like Gunsmoke, and the neverending stream of Warner Bros. shows for ABC (Maverick, Colt .45, Bronco, and more), "and in the last 15 years I've really become a John Ford fan, Howard Hawks, and this reminded me of them." However, the modern shoot, four weeks on Paramount Ranch in Santa Monica, Calif., was a lot less stressful than the days when directors would shoot a cattle drive by holding an actual cattle drive. Jenkins said, "It was hot, I'm old, and in that cave, I don't know what I was breathing, but it wasn't bad at all."

The authenticity was helped by having Russell aboard. Before Tombstone, well before Bone Tomahawk and the upcoming The Hateful Eight, Russell cut his child-actor teeth on TV Westerns like The Travels of Jaimie McPheeters, The Virginian, and The Legend of Jesse James. A Western veteran as well as a horseman and outdoorsman, he quickly became the on-set encyclopedia of all matters of the range to the rest of the cast. Jenkins said, "You're out there, and you're doing something, and you say, 'How about that, Kurt? Is that OK? OK? OK.'"

That sagebrush wisdom even extended to one of the most grisly sequences, as the cannibalistic troglodytes literally butcher one of the posse. Jenkins said, "We're food to these things, and that's what you do with an elk or a deer. Or so I've been told. Kurt hunts, and he said, 'That's what you do.'"

For an interview with director S. Craig Zahler, read Dust and Bones, Oct. 23. 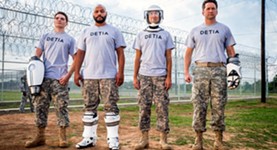