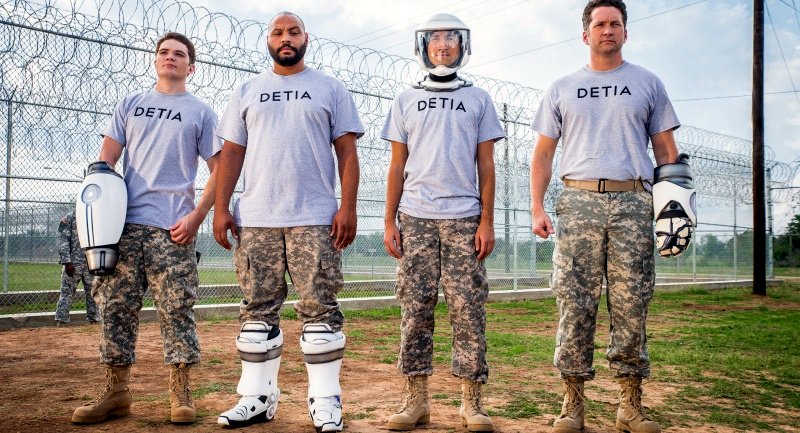 If they only had a brain: Rooster Teeth goes cinematic with Lazer Team. (Image courtesy of Fantastic Fest/Rooster Teeth)

Not many indie comedies have 10 minutes of closing credits, but then not many indie comedies take five minutes to list their Indiegogo backers. Austin's web video pioneers Rooster Teeth wanted $650,000 to fund their first feature film Lazer Team, but ended up with $2.5 million, and the "thank you" screen is almost as long as the film.

Will their crowdfunding friends be happy with their investment? All signs point to yes. It's a tale of four misfits: small-town Texas sheriff Hagan (RT co-founder Burnie Burns), bitter ex-high school football player Herman (Colton Dunn), cocky young QB Zach (Michael Jones), and village idiot Woody (Gavin Free). They have suddenly found themselves bound together when they accidentally put on parts of an alien power suit, intended for Earth's champion. Instead, that lantern-jawed hero (played by Blue Mountain State's Alan Ritchson) is left grinding his teeth as he tries to train the quartet. Imagine if Scarecrow, the Tin Man, and the Cowardly Lion got a brain, a heart, and courage, but no one gave them the instructions. Can they put the "team" in Lazer Team before the world ends?

If this sounds like The Marx Bros. Meet the Green Lantern, that's because it is, just with less edge. The final showdown, set unsurprisingly in a football stadium, really re-enforces the sense that this is a Texas movie, and the feel-good silliness is telegraphed from moment one. Yes, this is lightweight stuff, and the characters, like the plot, are pretty paper-thin. Burns deadpans his way through the film, as each of the rest of the team tests his and Adam's patience. Yet the whole point is that they are parts of a whole (thus the title), and it's a fun ride watching the unlikely heroes bond.

As schmucks-versus-aliens comedies go, it's no The World's End, and more The Watch with more charm (or Pixels with any charm). Instead, Lazer Team is exactly the boisterous, breezy, shamelessly pop-culture savvy action-comedy you would expect from Rooster Teeth. Larded with nods to Ghostbusters, Men in Black, the Fantastic Four, Pong, and high school football, it's a (mostly) PG fusion that makes them the geek-jock alternative to Broken Lizard.