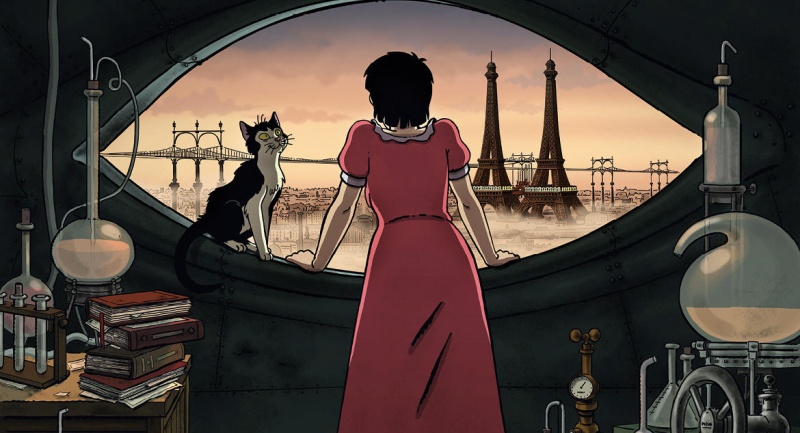 There's a lot more to steampunk than just hot-gluing some cogs to a top hat. Fortunately, French animated feature April and the Extraordinary World builds the ethos and aesthetic into every weld and seam.

Based on the graphic novel by Jacques Tardi, April 's original title (literally translated as April and the Twisted World) is more apposite. Its story starts in the reign of Napoleon III, the real nephew of Napoleon Bonaparte. It's his catastrophic engagement in the Franco-Prussian War of 1870 that lead to the unification and rise of Germany. However, April's world diverges from our own after he is taken off the board by a scientific accident gone awry, and the war never happens. Flash forward to 1940 and Europe is at peace. However, this world has never tamed the magic of electricity, and instead still runs on coal.

This is a Paris under the constant smudge of smog, lying in the shadow of the twin Eiffel Towers, where police patrol the streets on bicycle-powered blimps. April (voiced by Marion Cotillard) is the grand-daughter of the scientist whose experiment caused the old emperor's demise, and now she's hunting for her kidnapped parents in a complex plot that involves secret formulas, lizards in clockwork mech suits, and a surprisingly nuanced discussion of scientific ethics.

There are many of the tropes of action cartoons (a talking cat, a goofy grand-pere) that will make this look like children's fare. Yet there's a much more philosophical bent here. For while April may not have the visual grace of similar technologically-minded animations like Walt Disney's Atlantis or The Iron Giant, it's really an ethical quandary film, about the place of science in society. Disney's magic potion is replaced by a chemical formula: So while it may look like a family-pleasing piece of French fluff, it arguably makes a good double bill with Fantastic Fest's other science-centric centerpiece, The Martian.

It's not flawless, with its valuable anti-militarism and pro-environmentalism messages often delivered as thudding sermons. Plus, like much contemporary French animated science fiction, it shows its visual debts to Fantastic Planet and Miyazaki a little too clearly (especially in a humorous but unsubtle nod to Howl's Moving Castle).

Yet what it lacks in wit, it makes up for in visual creativity and engaging intellect. Moreover, April herself, with her concentration on the promise, power, potential, and pitfalls of progress, is a sterling role model for future scientists of the real world.