Down in the depths with Roddy Piper 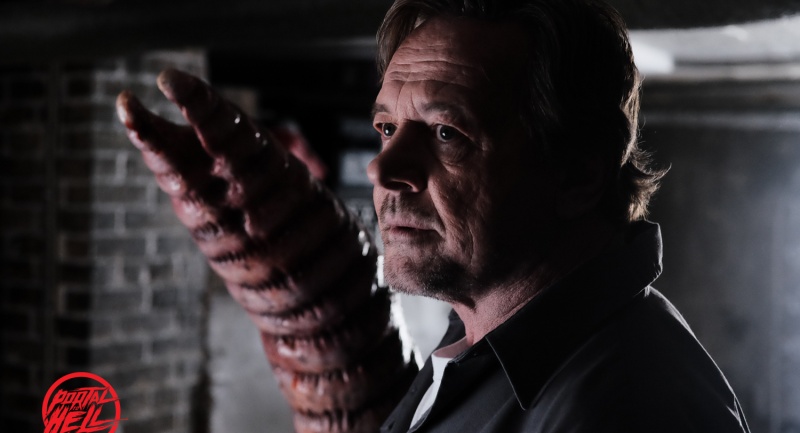 The Rowdy One versus the ancient one: Rowdy Roddy Piper in "Portal to Hell," one of the Short Fuse films at Fantastic Fest (Image courtesy of Fantastic Fest)

What's the secret to great comedy? Ask Vivieno Caldinelli, director of "Portal to Hell," and the answer is simple. "Exploding heads and a good fart joke. Always good to get a laugh."

The short, which plays at Fantastic Fest as part of the Short Fuse program, features wrestling great and iconic They Live actor Rowdy Roddy Piper in his final role as Jack, an apartment complex caretaker with the usual problems. Broken toilets, irregular power, oh, and a couple of tenants just opened a portal to R'yleh, city of sleeping monstrosity Cthulhu.

Growing up in Canada, Caldinelli watched a steady diet of horror and comedy. "That was everything I rented and went to the cinema to watch." Over time, he fell further into comedy, mainly because he knew it, "but the horror element, the gore, always poked its head into everything I did, even the absurdist sketch comedy. A lot of blood and exploding heads." Now he's part of the growing scene of Canadian comedy exploitation horror fusion creators, and his short has already played to packed house at Toronto International Film Festival and Fantastic Fest, with a trip to Sitges in its imminent future

Vivieno Caldinelli: He's definitely the sensible one, and he's essentially the straight man, surrounded by these idiots conjuring. Matt Watts, the writer, had the idea when in he was in the shower, of Overboard with Kurt Russell and Goldie Hawn, but directed by John Carpenter. Then he went on to write this treatment, with the cultists in this very Lovecraftian situation, but based around the relationship of Jack and Jeanie. I thought it was hilarious, but if we try to make this into a feature, I just fear that it will be spread too thin. Let's make it a short, and use that as a proof of concept to make a feature. But I wanted to make it more than a trailer, a real short film with a beginning, middle, and end, that could stand on its own.

AC: I have to ask you about getting Roddy Piper on board. A lot of Fantastic Fest attendees will remember him for his films, but for me he was always one of the great wrestling heels.

VC: We really wanted to get the right person for the short, and someone who could be in the feature as well. So Roddy was the guy we just homed in on. Since They Live he really wasn't used properly. Everyone just homed in on that Roddy persona, but we wanted someone who could play Jack, and we knew Roddy could play him in this very understated way, very put-upon, been there and back. So there really wasn't a shortlist. There was just Roddy, so then the big question was, 'Fuck, how do we get him?' So then the shortlist was people that we knew who had connections, people that did radio, people that did wrestling.

He actually had many managers, many. Some weren't too helpful, some were somewhat helpful, and then we really hit a road block. We had no money, we had an idea, we had a short film script. But then we found out he was coming to Toronto, so one of our other executive producers, Todd Brown from XYZ films who has quite the credentials, he called Roddy and set up a meeting, and that felt a little bit more legitimate. So me and and Todd went down to his hotel room, and that was just insane to meet him. He was the best person you could imagine, just a gentleman.

AC: You ran a successful crowdfunding campaign for the film. How much did that help?

VC: Tremendously. We wouldn't have been able to make the film without the crowdfunding success, and the help from other people like Shout! Factory and Gary Pullen, who's a tremendous artist. Rue Morgue magazine came on board and donated some subscriptions. But it's not only the people you need donations from. It's the people that can help you dredge up those donations.

The only negative aspect is that it's not for weak stomachs. Especially now that they have the app. You're constantly checking, every five minutes. It was brutal, because you'd go an hour or half a day without anyone bidding on anything, and you just think, 'That's it, we're done.' Then overnight you'd wake up and you'd jumped 20 percent. It's an excruciating process, but man, is it worth it.

AC: You've talked about potential sequels and a feature version. Sadly, Roddy passed away this year, so what does that mean for the future adventures of Jack?

VC: God rest his soul, we are moving ahead. We do have a very, very, very short list internally of who we want to fill those legendary shoes of Roddy. It's got to be one of those things where we've got to get the right person, or we won't make the thing.