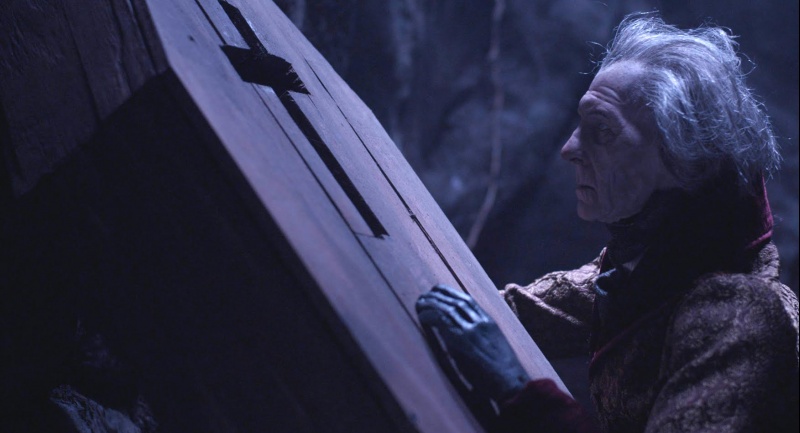 "The Mill at Calder's End" (Image Courtesy of Fantastic Fest)

It doesn't take much to build a world. A few old palettes saved by dumpster-diving. Fake, foam-rock walls from Warner Bros.' supply company. A Franklin Mint Model T Ford on a treadmill. But in the hands of Kevin McTurk and the puppetry team behind "The Mill at Calder's End," it becomes a whole Gothic fantasy.

Part of this year's Short Fuse package at Fantastic Fest, "The Mill at Calder's End" is a tale of Victorian darkness and ghostly menace, enhanced by the vocal talent of original scream queen Barbara Steele. McTurk has spent two decades as a creature effects artist, starting under Stan Winston, and so he got his introduction to puppeteering on Jurassic Park ("I was inside the cylinder when the egg was hatching") and Interview With a Vampire. He made his first full puppetry film, the Jules Verne-inspired "The Narrative of Victor Karloff" four years ago, and returns to the form with his new short about a man returning to the blasted moor and crumbling edifice of his cursed family home.

Austin Chronicle: There's been a resurgence in techniques like stop-motion, with films like Frankenweenie and Anomalisa, but audiences still don't expect to see rod puppetry. How hard was it to find screen-experienced puppeteers?

Kevin McTurk: That's the good thing about working in Los Angeles. And also because I've been working in all these shops for so long, I know a lot of the great puppeteers out there. There was actually a few cross-over people from Anomalisa in the art department who joined me in my film. There's a gentleman by the name of Eli Presser and he was the lead puppeteer. He can pick up just anything, and all of a sudden he just breathes life into it. He has his five or six people that he calls upon. But it was so difficult to shoot, because in every shot you're hiding puppeteers, and every shot is like an effects shot. You have to create this artificial world in every frame. You can't turn the camera around and get the easy shot. It's all impossible shots.

AC: There's a magic about puppetry, where you can see the puppeteer and that doesn't hurt the mystery, or make the puppet any less alive.

KM: To me, I don't mind seeing a little bit of the puppeteer in some of the frames. We know they're puppets, and people love seeing a hint of human interactivity.

AC: So who were your puppeteering influences?

KM: Jim Henson was huge. The Jim Henson's The Storyteller series? Very inspiring to me. He did a film called Dreamchild that has bizarre looking puppets, very adult and very pretty. There's a layer of filth and dirt to them that I like to put on the characters I have. I didn't want them looking pristine. I wanted them weathered. They lived in their clothes.

AC: There's a classic Gothic overtone to the whole film. So was the facial sculpt on the father a deliberate reference to Peter Cushing?

KM: Definitely. I knew I wanted to do something that was reminiscent of Edgar Allen Poe and H.P. Lovecraft and MR James, and then the classic Gothic horror films of the Sixties, Roger Corman.

AC: The opening sequence of the car going through the marsh was really reminiscent of Corman's House of Usher.

KM: Yes, his Poe films, and Hammer films, and Mario Bava. That's how I approached Barbara Steele, who was in all the Bava films. I managed to find her agent at the time, and cold-called her and pitched it all to her. There was a long silence, and then she went, that sounds absolutely brilliant, let's do it. She was such an absolute good sport. My friend sculpted the likeness of her, and she was very particular about the eyebrows and hairline and things. She loved it, and she was sad that she's so brief in the movie. She gave it her all, and was wonderful, and then I got to go to Rome this summer with her. She presented it to an Italian audience, and we did a Q&A. It was so special.