Zoë Bell on the run becomes a real leading star 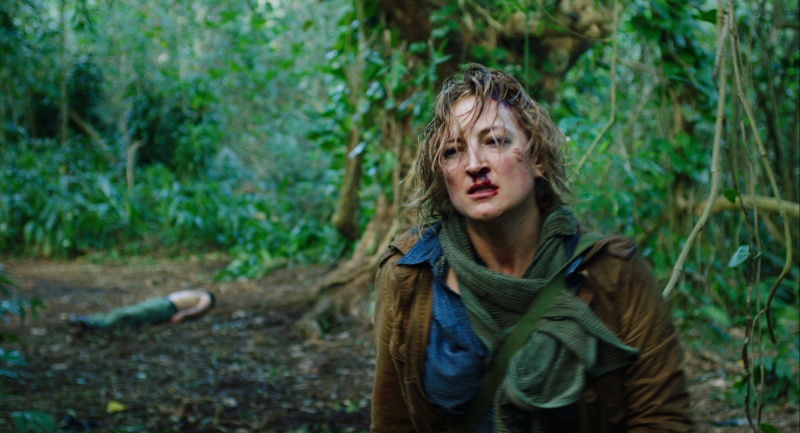 Tough on the outside, broken on the inside: Zoë Bell in Camino. (Image courtesy of Fantastic Fest)

For years, Quentin Tarantino has told anyone that would stand still long enough that stunt performer/actress Zoë Bell is leading lady material. With jungle action flick Camino, she undoubtedly proves him right.

Bell (Grindhouse, the upcoming The Hateful Eight) last worked with director Josh Waller on Raze, a low-budget Game of Death-style succession of fight sequences: fun, but disposable. This time, they're aiming for something much more grounded and character-driven, but still wisely deploying Bell's sense of gritty action and scrappy fighting style.

However, it also gives Bell her meatiest role to date, and she repays that with a performance that proves she can carry an entire film. She plays Avery Taggert, a prize-winning war photographer, who arrives with all the well-established damage that comes with that trade. Her editor (a welcome cameo appearance by Kevin Pollack) convinces her to head to Columbia to follow a Spanish missionary. This is the Eighties, when political discontent and drugs were all the headlines, so of course she tags along with Guillermo (a stand-out performance from Nacho Vigalondo) and his well-meaning and well-armed acolytes.

Of course, Avery's camera catches something it's not supposed to, and suddenly she's fleeing for her life through the jungle.

Camino works for three reasons. One, Waller has improved as a director by leaps and bounds from the diverting but disposable Raze, bringing a gritty freshness to this wilderness flight. Two, Bell absolutely nails the outer toughness and inner fragility of Avery as a woman with ghosts, always on the run. She never makes her into some SEAL/ninja hybrid, but instead keeps her plausible as a woman who has survived combat zones as a non-combatant, and knows just enough to get by. And three, Vigalondo, who gives Guillermo this motor-mouth messianic aspect. Best known as a director (Extraterrestrial, Open Windows), he recalls the best swirly-eyed crazies of classic Eighties straight-to-VHS action flicks.

Guillermo's religiosity is a theme Camino shares with Raze, as is the question of exactly how much a person has to go through before resorting to violence. There have been deeper, more psychologically proving examinations of the experience of being a journalist in a war zone (The Year of Living Dangerously, it ain't). Yet Camino combines gritty smarts with its hard-hitting action.