Drag me to Turkish hell 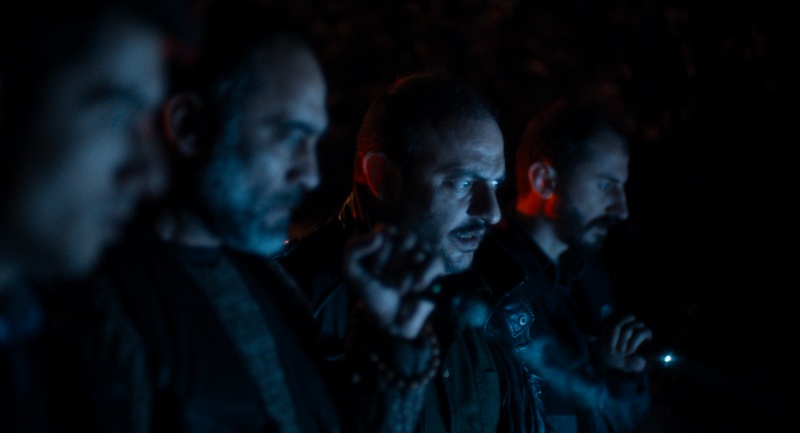 Horror is the language of nightmares, and so without a translation, the horror of a different culture can often seem intractably alien. In Turkish horror Baskin, the descent into a hellish madness is so visceral that it transcends language.

One of the centerpieces of Fantastic Fest this year is documentary Remake, Remix, Rip-Off, which chronicles Turkish cinema's long history of cannibalizing any foreign films it wants. Yet while Director Can Evrenol shows his influences (Fulci, Lovecraft, Silent Hill, a whole bunch of Clive Barker), it is wholly original. In horror terms, you ain't seeing anything like this if you ain't seeing Baskin.

Baskin is really a drama in three acts: the first, a group of vaguely surly cops in a low-rent restaurant, bullying the staff and talking about hookers. The only sign that something untoward is happening is when one of them has a weird freak-out in the bathroom. The madness rises as they are called out as back-up to a strange structure in the middle of nowhere. Then the real inferno fires up when the cops finally fall into the clutches of Father (newcomer Mehmet Cerrahoglu, in real life a parking garage attendant, but whose incredible look and terrifying performance makes the final act spellbinding).

Evrenol is a FF veteran for several shorts (including an 11 minute version of this same story from 2013), and here he pulls off a minor miracle of extreme supernatural survival horror on zero budget. From the opening moments, he creates an unnerving mood and a sense of complete cosmology that the humans within it can never fully comprehend. That final sequence is truly squirm-inducing, not least because he changes tone so completely from the opening and middle sequences, from verite, to fast-cut scares, to long, languorous, brooding shots of this incredible antechamber to hell that he has created.