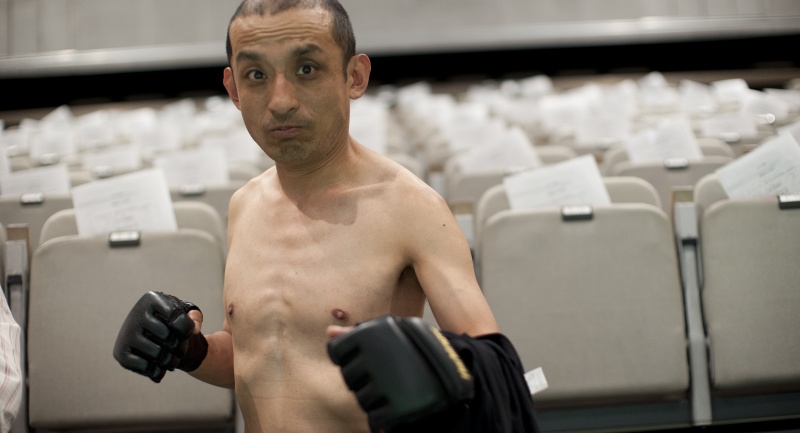 It's not the dog in the fight, it's the fight in the dog: scrappy underdog. So many sayings about how toughness means more than physical strength. When documentarian Heath Cozens encountered the pro wrestlers featured in his film Doglegs, that wisdom was tested to its extreme, because many of them have profound disabilities.

Doglegs the movie follows several of the fighters: L’Amant, a married family man with severe cerebral palsy who can't feed himself, but regularly fights his wife and professional caregivers in the squared circle; Yuki Nakajima, who battles depression and cancer as much as he does his opponents; “Sambo” Shintaro, another man with cerebral palsy and the promotion's top good-guy babyface, who wants to win one match before he retires; and “Antithesis” Kitajima, arch-villain, ruthless, who wades into the ring with no disabilities, pummels Shintaro, and yet is the closest person to him in the world. But is he the bad guy, or is it the people who want to coddle his opponents? Cozens said, "Maybe it's something to do with the samurai spirit, the Yamato-Damashii, the nobility of fighting, and the art of expressing yourself in combat."

A New Zealander, Cozens moved to Japan in 1996 to work in TV production, and came across the Doglegs promotion in 2009. In the intervening six years, he has crafted a story that throws out the conventions of how audiences think about people with disabilities. The fact that caregivers are fighting with the people they support will throw audiences for a loop, and that's exactly why he made the film. He said, "Of course you should look, but how should you look at it?"

Austin Chronicle: How did you even find Doglegs?

Heath Cozens: A good journalist friend of mine was teaming up to pitch stories for The Wall Street Journal, and he mentioned this off-limits, taboo subject that pretty much all the foreign correspondents in Tokyo had already pitched, everyone getting the same response, which was 'This is amazing, but there's no way we can touch it.' So I said, what is it? And he said, it's handicapped pro wrestling.

As soon as I heard those two words, I was overcome with this wave of conflicting emotions. It sounded funny, it sounded amazing, it sounded mind-blowing and very un-PC. But then it also sounded like it could be some very exploitative endeavor with an evil circus ringmaster type cracking the whip while freaks came parading out for people's entertainment. So I went in there, not knowing what to expect. But when I actually saw them fight, I was blown away all again, because it was so much more than I expected. 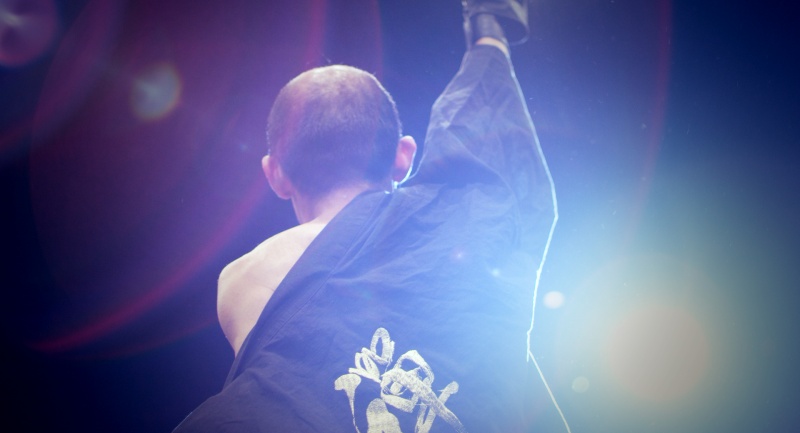 Bathed in glory: Doglegs rewrites the rules about how the able-bodied community should think about people with disabilities. (Photo courtesy of Fantastic Fest)

HC: It was in this well-to-do Tokyo town hall, and it was this very well-to-do, middle-class crowd, like people were dressed up for Sunday church. There were little kids running around, people laughing, old people, young people, disabled people, able-bodied people. It was this healthy, convivial environment. And then the doors open, and you go in and sit down, and six men with heavy cerebral palsy start attacking each other in the middle of the ring. You go, 'Oh my god, I wasn't quite ready for this.'

The ring announcements are very provocative, it's really black humor, and they're really taking the piss out of the fighters. Not across the board, of course. Some of them are held up, some of them are ridiculed, but that's how it would be with any wrestling match. You have your funny characters, you have your heroes, your babyfaces, and your heels.

So just as soon as you get OK with it on one level, it throws you for six, because it's unrelenting in getting inside your psyche and shaking it up really hard. It's like a hard reset was pressed on my consciousness, and I didn't know how to feel.

AC: How did you pick the fighters you were going to concentrate on?

HC: I was looking for characters to whom Doglegs meant a lot. The first one I landed on was Nakajima. He'd lost every single fight he'd fought for about 10 years, had never had a win, and I saw him win. He pulled off this ridiculous suplex, threw the guy back, stood up on the ropes and basically pumped his chest and said, 'Look at me now! Depression, cancer, how do you like me now?'