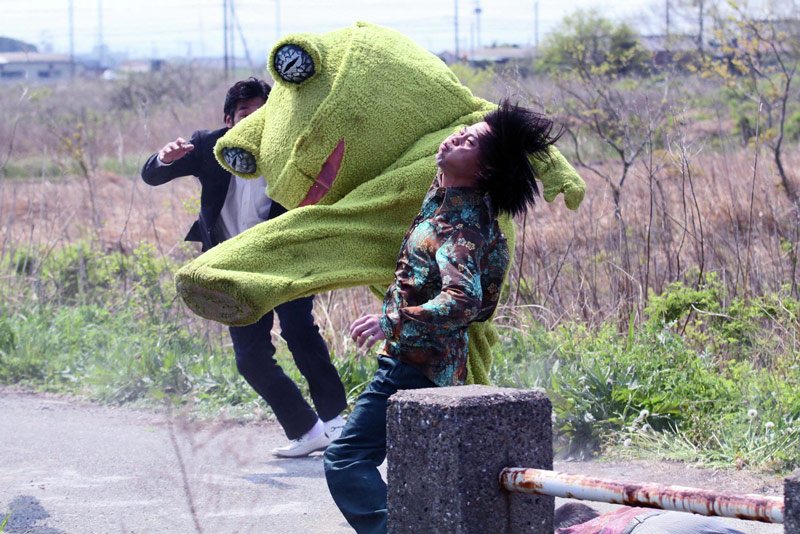 Miike has made a career out of messing with audience’s heads (Happiness of the Katakuris, anyone?) thus creating a love him/hate him divide. His plots tend to overflow with half-baked ideas and seemingly random chaos that eventually, surprisingly coalesce into a beautifully bloody mess that somehow makes perfect sense. If you’re not familiar with Japan’s most lunatic filmmaker, Yakuza Apocalypse is a perfect introduction to Takashi Miike and the methods of his madness.

Hayato Ichihara is fledgling Yakuza member Kageyama, a bottom-rung thug who nevertheless outfits himself in snappy business attire and lives to die for his beloved boss Kamiura (Lily Franky). A sensitive killer, Kageyama wears none of the traditional Yakuza tattoos that decorate the skins of his more mangy brethren. That all changes when another Yakuza gang arrives in town and kills Kamiura. But wait! The boss turns out to be a vampire, and before he perishes he bites Kageyama, turning him into a vamp, too. “Stay foolish,” the dying Kamiura advises his ambitious underling, and that’s just in the film’s first ten minutes. Eventually, nearly the whole population goes vampiric, leading to – among a whole lot of other, ever more bizarre setpieces – the arrival of a frog-headed demon, a duster-enshrouded stranger toting a tiny coffin on his back (Django!), and a Godzilla-sized, bargain-basement version of Sanrio’s furry, amphibious Keroppi.

Javanese kicker-of-asses Yayan Ruhian (The Raid films) shows up as an anime-besotted maniac, and the rest of the cast go fittingly foolish right along with him. If there’s any complaint to be made, it’s that Miike paints himself into a gore-drenched corner by the time the film approaches its pièce de résistance. Not that that’s a problem, though. The director’s wilder films unspool like the stream-of-consciousness imaginings of a hilariously deranged mind. There’s more to Yakuza Apocalypse than just oddball-brilliant spaghetti Western riffs and gangster eviscerations. It’s also a sneaky, snarky commentary on Japan’s seemingly infinite financial recession. Big boss vampire is adored by his townspeople because he gives them hard cash to survive hard times. Nevermind that he’s also got a group of locals locked away down in his basement, curiously knitting their days away – no, really, they’re fucking knitting! – even as they’re being used as “feed” for the bloodsuckers upstairs. Yakuza Apocalypse is Miike at the top of his game, breaking cinematic rules at every chance while crafting seriously subversive cinema that defangs both the real-world Yakuza, the Japanese government, and, heaven help us, Sanrio, too. Knitting I tell you! Knitting!