The Editor and Reality, movies about movies

See the point yet? The Editor is the latest slice of neo-retro-exploitation from Canadian sleazoid revivalists Astron-6. (Photo courtesy of Scream! Factory/IFC Midnight)

There's an old wisdom: If you want an Oscar, make a movie about movies. How true that is may be questionable, but it's undeniable that the film industry often turns upon itself to find stories.

Of course, documentaries often drill deep into that vein (see last week's column, The Story of Cinema: Part One, for more on that phenomenon). But from Citizen Kane to The Artist, there has always been a pleasant sense of familiarity for narrative storytellers in turning the camera 180 degrees.

True, part of that may be that film fans love in-jokes. Come now, how often have you giggled inwardly at a Wilhelm scream? That level of knowing, nod-and-a-wink cinema is meat and potatoes for filmmaking collective Astron-6, who have become the standard bearers for Canada's breaking wave of neo-exploitation. However, their quick-and-dirty shorts have always been much more accomplished than their features (Eighties spoof Manborg being a particular chore to endure). Finally, with The Editor, they may have lived up to their 90-minute potential.

Think of it as Berberian Sound Studio's idiot brother. In Peter Strickland's nightmarish modern classic, Toby Jones plays an English sound engineer out of his depth on the set of an Italian Giallo production. In The Editor, that role is fulfilled by Adam Brooks as Rey Ciso, formerly the greatest living film editor. That is, until he lost his fingers in a bizarre editing accident, and now he's stuck editing low-budget crime dramas.

Berberian Sound Studio concentrated on the Italian Giallo pulp genre as lost high art, bathing in its nightmare logic. By contrast, The Editor wallows in the fact that much of the output of Italy's grand era of sleazy psycho-thrillers was just prurient seat-filler slop that just threw as much nudity, gore, more nudity, and nonsensical narrative babble as possible in 90 minutes. The artistry, the genius, the off-the-wall creativity, was sometimes a side effect of the no-rules, formless environment. That's what The Editor absorbs and relishes. Characters are wafer-thin, motivation is erratic, logic is defied at every second, and if there's a scene without a gratuitous butt shot in it somewhere, you're probably just not looking for it hard enough.

The whole project is fearless about drowning itself in references. Cult favorites like Tristan Risk (American Mary), Laurence Harvey (The Human Centipede II (Full Sequence) ), Paz de la Huerta (Nurse 3D) and Udo Kier stalk through a script that brazenly nods to The Beyond, Pieces, Zombi 2, and Suspiria. Red herrings drop from the skies as fast as bodies hit the floor, while a knife-wielding maniac dispatches cast and crew from the film-within-a-film.

Yet for all its silliness, there's enough wit and intellect to raise The Editor a cut above the rest. For every moment that (lovingly) mocks the genre, there are a few that genuinely catch the yellow fever dream of Giallo. Moreover, Samantha Hill as Bella, Ciso's naive assistant, evokes the tragic fragility of Fulci's finest leading ladies. 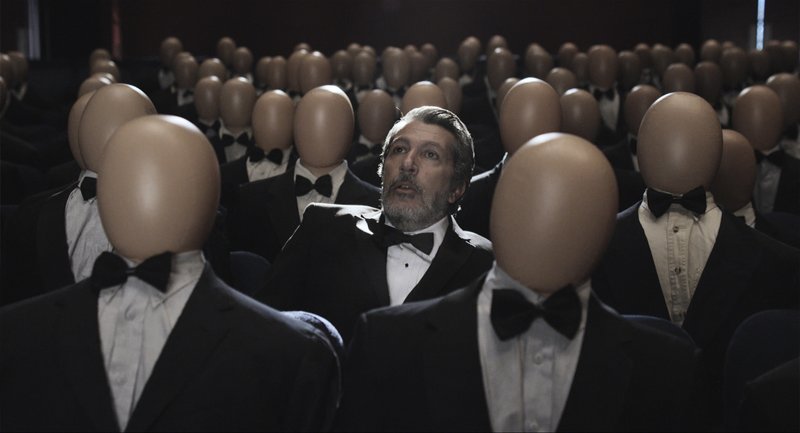 Logic was never the leading requirement of Giallo, and some would say that's true of director/writer/composer/editor Quentin Dupieux (Rubber, Wrong). With his latest, Reality, he re-enforces those accusations. Yet, like Astron-6, he may have created the best work of his career.

Dupieux has been a divisive figure: either you're on board with his aggressive brand of surrealism or you're not. Conventional narratives are not his brand, relying instead on a unified feeling of absurdist silliness that binds the individual scenes together. Yet even his loyal fans must concede that, once in a while, it feels like a twee riff on mid-period Lynch. In Reality, he pinwheels away from the aggressive queasiness of Wrong Cops to something much closer to Jacques Tati, or early, ridiculous Woody Allen.

He makes an initial nod to his earlier scattershot approach to stories, with seemingly unconnected scenes. A child called Reality (Kyla Kenedy) watches her father gut a boar, but becomes convinced that she saw a VHS tape in its belly. Meanwhile, somewhere on a TV set, cameraman Jason (actor/director Alan Chabat, The Science of Sleep, Asterix and Obelix Meet Cleopatra) films Jon Heder as a cooking show host dressed as a giant rat.

Instead of giddy absurdism, this marks Dupieux grasping for more cerebral surrealism, and so the strands come together quickly. The girl is the star of a film within the film that a more successful director is making for the producer to whom Jason is pitching his own movie.

Every Dupieux movie has its idiosyncrasies. Here the key is how his characters get caught up on tiny minutiae. Most specifically, that Jason's film will be greenlit, but only if he can find exactly the right groan for a pivotal scene. Without that one sound effect, the producer tells him, the film can never happen. Cue the traditional Dupieux shaggy dog story, as Jason ineptly hunts for the sound that will change his life.

Just as Astron-6 has found a better balance to the silliness, Dupieux has made leaps and bounds in binding his narrative together. Rather than diversions and dead ends, there are loops and swirls, like Eric Wareheim's appearance as a man whose dreams aren't interesting enough for his therapist. That therapist is Jason's wife, and the patient is Reality's teacher, which for Dupieux is a pretty linear connection. However, his sense of the strange is still there: but rather than being built on quirky non sequitors, it's layers of perception, as the characters bounce into each other in the real world, on set, and in dreams.

Again, it's hard not to make a connection to Berberian Sound Studio. Beyond the obsession with the perfect sound effect, it's structurally close kin to Strickland's backwards/forwards, self-referencing style, just with less madness, and more of Dupieux's elegant acceptance of the impenetrable weirdness of being.

The Editor (IFC Midnight/Scream! Factory) is out now on DVD/Blu-ray combo pack

Reality (IFC Midnight/Shout! Factory) will be released on DVD/Blu-ray combo on Sept. 15.