Burying the Ex and Patch Town

Cult status is an enigma. How does a film achieve it? Can it be aimed for? Can a filmmaker at least increase the odds that, a decade from now, a tiny cabal will call it their favoritest film ever? 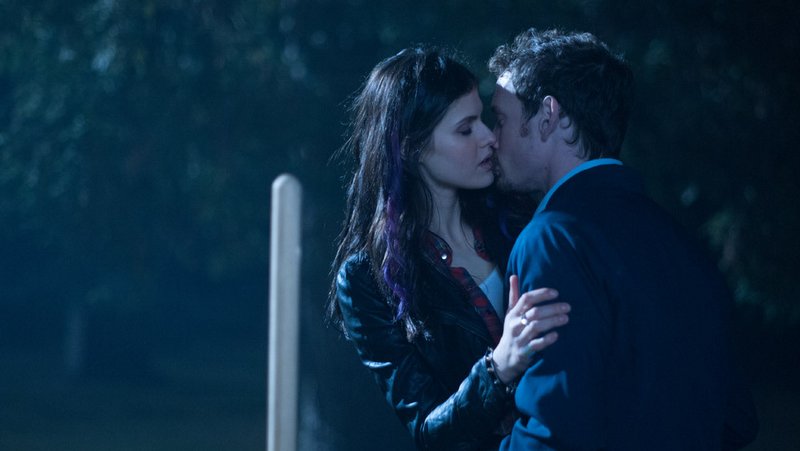 Love among the tombstones: Anton Yelchin and Alexandra Daddario in Burying the Ex, the latest comedy-horror from Joe Dante.

That's what denotes true cult success: that loyalty, that sense that audiences will feel that certain thrill when they find someone else who thinks about it the same way they do. Sometimes it's a big cult (cf. Fight Club) and sometimes it's more obscure (like, say, Meet the Feebles). Sometimes it's on no one's radar beyond a select few (like the rare obsession over Five Deadly Venoms).

Is there any unifying factor? Arguably not. But sometimes, it's the romanticizing of one particular aspect of the production. In the case of Burying the Ex, it's the presence behind the camera of Joe Dante.

For anyone who doesn't know (and it's easy to forget), Dante was one of the defining directors of Eighties big-budget cinematic joy. He was part of the coterie of Spielberg acolytes, alongside Robert Zemeckis, Chris Columbus, and Joe Johnston. But while they are still A-listers, the director of Gremlins, Innerspace, and Piranha fell into relative obscurity. Honestly, Looney Tunes: Back in Action didn't help anything, but as his peers are responsible for Flight and Captain America: The First Avenger, Dante went to the trenches of TV, back before that was the cool place to be.

So his return to features for the first time since 2009's The Hole is at least going to raise some eyebrows.

Dante was a fantasy director, but his specialty was injecting the bizarre into the mundane. Tiny monsters in the Midwest. Murderous neighbors. Toys coming to life. It was all about how ordinary folks contend with that weirdness. And so it is in Burying the Ex, a blackly comedic relationship riff. Max (Anton Yelchin, Fright Night, 5 to 7) is the typical schlub in a relationship with a woman, Evelyn (Ashley Greene, the Twilight saga), technically out of his league. Their relationship is more on the rocks than he would like to admit or she can recognize, especially since she doesn't share his Halloween obsession. His attempt to break up with her is unexpectedly interrupted when she gets hit by a car and dies. After a mourning period, he moves on, and starts dating Olivia (Alexandra Daddario). Unfortunately for their budding relationship, Evelyn isn't taking any of this lying down (or, more technically, six feet under). So now Max has two women in his life: one that likes hanging around in cemeteries, and the other who has just crawled her way out of one.

After a rambling opening, this necromantic triangle is where the film finally finds its humor, as Yelchin bounces between being the two conflicting loves of their (after)lives. Dante also drops in enough subtle and overt homages to L.A.'s horror lineage, with several key sequences in the Hollywood Forever cemetery. There are also more than enough nuances, like The Whip and the Body, while there's an abiding sense of graveyard humor evocative of a true cult, Michele Soavi's funereal oddity Cemetery Man, aka Dellamorte Dellamore.

This would probably have been much better received if people didn't know it was Dante, and didn't watch it with all those expectations on its shoulders. It's been treated as a creative faceplant by a former genius on a par with Argento's Dracula, but that's utterly unfair. No, it's not Dante's best work, but it's a thematic return of sorts to his early, edgier work like The 'Burbs and Gremlins. Moreover, it suffers by comparison to the similarly-themed Life After Beth, the brutally underappreciated The Voices (coincidentally, both starring Anna Kendrick), or the fascinatingly twisted Nina Forever. Unlike any of those, its third act replaces studied weirdness with full-blown gore comedy, and if you're looking for classic Dante, that's where you'll find him.

It's also a form of redemption for Daddario. Between this and her head-turning performance in True Detective, she may finally put the mortifying specter of Texas Chainsaw 3D behind her. She could have played Olivia as a manic goth pixie girl, but she and Yeltsin have the same endearing chemistry as Mike Myers and Nancy Travis in So I Married an Axe Murderer. It's not everything fans may be looking for, but it's definitely charming, in an off-beat way. Far more likely to gain a certain longevity is Patch Town – firstly, because it's a modern musical, which puts it in the realm of cinematic oddity. Second, it's Gothically-inclined, and the combo of dour humor and songs will at least get it a first viewing from the The Rocky Horror Picture Show/The Devil's Carnival crowd. And, honestly, they may find something surprisingly charming here.

But what if a worker remembers their time as a toy?

Goodwill automatically wins points for a blissfully creative and enthralling world, one that you've never quite seen before. He also has a keen eye for an unusual cast, lead by Jon (Rob Ramsay, who looks like a giant Cabbage Patch Kid anyway). He's the innocent driven by love, like Buddy the Elf dropped into a Stalin-era steel works. His relationship with Mary (Stephanie Pitsiladis) is the emotional heart of the film, as the pair flee with their own purloined Brassica offspring. The menace is provided by the Child Catcher (Julian Richings, Cube, Kingdom Hospital), the misguidedly malevolent force behind the whole conspiracy. Each has their own allies: Sly (Suresh John), the truck driver who becomes Jon and Mary's conduit to the outside world, and Kenny (award-winning comedian Ken Hall), the trenchcoat wearing stealer of toy-babies.

This isn't a masterwork. Sometimes the threadbare budget shows, and its eagerly embraced oddness is not for all tastes. But there's something charming, moving, and ultimately heartwarming about it. To add joviality, Sly and Kenny provide much of the oddball humor, by turns goofy and creepy. However, their work is complimented by some subtle but incisive commentary about the disposability of toys, and the fickleness of a child's affections. The tunes are more than toe-tapping, the look is innovative, and, honestly, where else will you find jokes about the sartorial merits of kidnapping gloves?