The words "This Was in Texas" splash across the screen. The horizon tinges with a deep shade of a golden-brown as the two leads Ruth (Rooney Mara) and Bob (Casey Affleck) run across the prairie. Glimpses of sun filter through the pair as they embrace, strings strumming softly in the background. 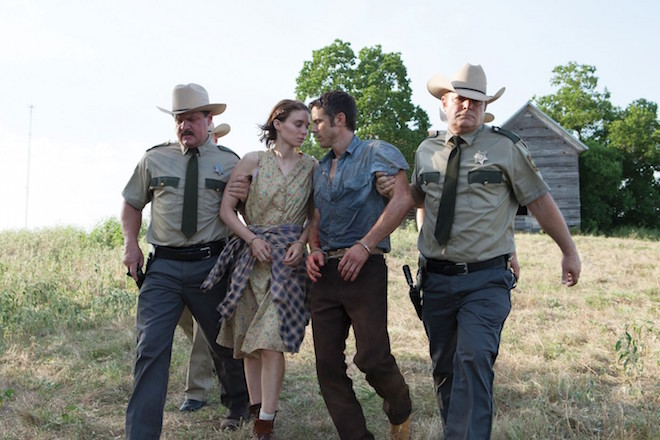 Last night, Austin Film Festival along with The Bullock State History Museum presented a screening of Lowery's film, as a part of their "Texas Focus Series" at the Texas Spirit Theater.

Before the the screening, the audience was treated to one of Lowery's short films from 2008, titled, "A Catalog of Anticipations," giving them a taste of the filmmaker's style.

Ain't Them Bodies Saints made its debut at the 2013 Sundance Film Festival where it competed for the Grand Jury Prize and took home the award for Best Cinematography. The film follows Ruth and Bob, a husband and wife who commit crimes and live as outlaws, until Bob takes the fall when a shoot-out ends badly. Bob is then sent to prison and eventually tries to make his way back to his lady love and his daughter, who he has never met. Ain't Them Bodies Saints is a love story set against a vicious small Texas town in the Seventies.

After the screening, there was a short Q&A moderated by AFF Senior Film Programmer, Liz Mims.

Lowery admitted to not having watched the film for some time. "I had one time where I watched it two years ago, halfway through it, I was like, 'this is as good as it's ever going to get,' and I haven't watched it since then. I think that it's a healthy thing to do, I probably won't watch it again for five or six years. It's good to not look back on things," he said.

Lowery not only has his hand in writing and directing, he works as an editor as well. He edited fellow Sundancer, Upstream Color, along with the film's director, Shane Carruth. "Editing satisfies the filmmaking urge the same way a director's [job] does. You are taking images and sounds and jamming them together to make an alchemical, chemical reaction out of them, which is exciting. I learned to not separate writing, shooting, and editing, it's all sort of one big mess of creative output," Lowery said.

Originally, Lowery wanted an unknown actress to play the role of Ruth, but his script had been circulating around agencies in California and ended up in Mara's agent's hands. "Around this time The Girl With the Dragon Tattoo had just come out and she was everywhere and about to get her first Oscar nomination, and I assumed she would never want to do this little, tiny movie in Texas." But Mara did. Lowery wrote her a letter and met with the actress. Later on, he got an email from her agent saying she had a window in June, Lowery recalled. "I was like 'okay, sure!'"

Although not a born Texan, Lowery feels as if it's a part of his identity. When he first moved to the Lone Star State, he was accustomed to the snow, being from the north, but at at a certain point everything changed. "The stories I wanted to tell and the landscapes I wanted to put in my movies were of Texas and I just developed some good old-fashioned Texan pride. I wanted this movie to be a declaration to that. It's filtered through my work to one degree or another," Lowery explained.

Lowery's next project is a remake of the Disney classic, Pete's Dragon. "We are editing right now and I realized this is just a complete remake of Ain't Them Bodies Saints, except it's PG and it has a dragon in it. Literally I was like, 'holy crap!' It wasn't conscious, but it was like a shot by shot remake." Lowery had the theatre ringing with laughter. "You all are gonna be like, 'yep, he ripped himself off in a big way.'"

The Q&A ended with a question from the audience asking about the uniqueness of the film's title, which actually pre-dated the film itself by a number of years. "I have a repository of titles I like in my head and I am always looking for a movie that I can put one on." Partly based on song lyrics, Lowery made up the rest of it. It was a temp title that stuck, and everyone got attached to it. "It wasn't the best business decision, but from a creative one it made sense and there is not going to be any movie ever with that title," Lowery said.

The "Texas Focus Series" rounds out its programming next month with a screening of Friday Night Lights on September 15, 7pm. You can buy tickets here.