Eighties horror cinema was best when served with a thick layer of rubber and goo. It was practical effects masters like Robert Kurtzman that defined the genre as much as the actors and directors, and he's still doing it today. 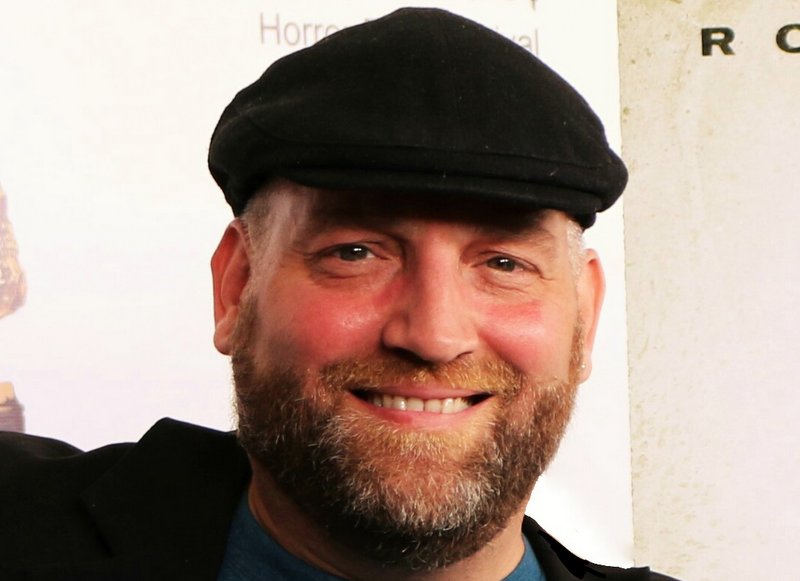 "I haven't been [to Los Angeles] in 12 years. I just build stuff, and go wherever we shoot." FX innovator Robert Kurtzman on the changing business of practical effects. (Courtesy of Robert Kurtzman)

Along with Greg Nicotero and Howard Berger, Kurtzman was a co-founder of the industry-defining K.N.B. Effects. His fingerprints are on some of the era's most famous effects sequences and monster designs, including Austin productions like Spy Kids, Texas Chainsaw 3D, and The Faculty. He finally quit L.A. in 2003, returning to his native Ohio to set up his new effects shop, Creature Corps. Moving away from the coast hasn't slowed him down, with recent credits including Kevin Smith's Tusk, All Cheerleaders Die, Fear Clinic, and breakout horror smash It Follows.

Tonight, he'll be in Austin for a special screening of one his earliest successes, 1987's Evil Dead 2. You can read all about that in today's issue (see "Garth Manor Brings out the Dead," July 31), but here's the full Q&A, where he talks about the making of the horror classic, his career in FX, and whether you really need to head to Hollywood to make it these days. Oh, and a little vampire franchise called From Dusk Till Dawn.

Austin Chronicle: The original Evil Dead was a big success, but still definitely underground. When you came on to the sequel, what were they trying to do with it?

Robert Kurtzman: That, along with the sequel Army of Darkness, they were the most fun shoots. We shot in a small town in North Carolina, and it was just like a little family unit for three months shooting over the summer. We loved the filmmakers. We loved [director] Sam [Raimi], we loved Bruce [Campbell], we loved Bruce Tappert, the producer, and it was just one of those shows that clicked. We were big fans of the first film, and obviously the second film had a different tone, but we thought he made the right choice in the long run, because it's my favorite of the series.

AC: You weren't exactly shooting somewhere with easy access to supplies, and the industry is filled with horror stories of effects guys who realize they had enough material for only one take.

RK: We prepped the show in L.A., we built everything in South Pasadena, and then we crated it all out and shipped all the supplies out there that we thought we would need. Everything was accessible with overnight shipment if you needed. The actual lab that we set up to finish and work on things as we were going along was actually an old kitchen in the middle school that was abandoned and we were building the sets on.

AC: If someone's looking for your work in the film, is there anything they should watch out for? 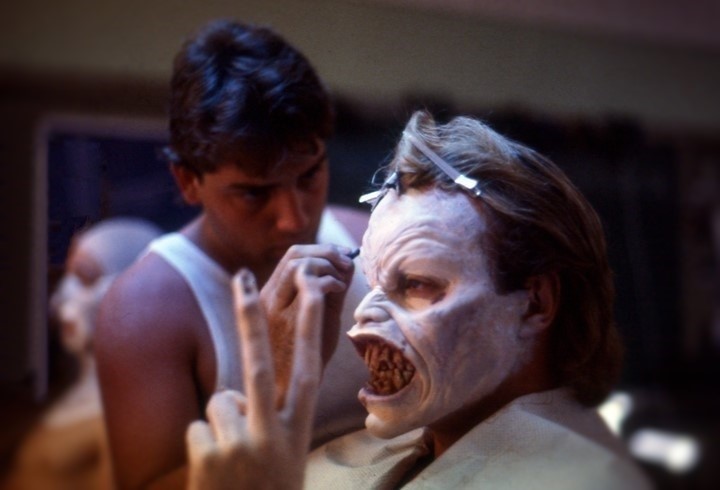 "We were juggling around town as freelance artists, and everybody was feeding off each other's creativity." Robert Kurtzman applies the finishing touches to Ted Raimi on the set of Evil Dead 2. (Courtesy of Robert Kurtzman)

AC: You started your career in this golden age of … gross-out horror isn't the right term …

RK: Rubber monster movies. It was the mid Eighties, and it was the boom era. Every monster movie had to have some practical creature effects and makeup effects. All the artists on that show, we all came up in the business together – Howard, Greg, me, Shostrum, we were all doing it for the first time. We were juggling around town as freelance artists, and everybody was feeding off each other's creativity, everybody was learning from each other, we all hung out together. It was an interesting time, almost like you were a bunch of bands coming up in a certain era.

AC: This was also the era of sequels aplenty. II's, III's, IV's, sons of, brides of. But as an artist, when you're working on something like Evil Dead 2 or Phantasm II, you're building off someone else's work. How much leeway did you have to not just emulate?

RK: One good thing was the originals had a smaller budget, so by the time they did the sequels they had a little more money. That allowed us to use the state-of-the-art techniques to do something bigger and better, and then the directors having a bigger vision for the project really helped us be more creative and go a little crazy.

AC: A lot of that era of films is getting restored for Blu-ray, and you can see details and effects that were missing on VHS or broadcast TV. Do you ever rewatch those restorations of your own work?

RK: Occasionally. I just watched Evil Dead 2 because the 25th anniversary edition just came out and we did a lot of interviews for it. They're coming out with The People Under the Stairs and Army of Darkness, and it's great, because a lot of those films have been out of print, or they've been using 640 by 480 video masters. It's like my film Wishmaster. It's on Netflix and people watch it all the time, and they tell me, 'it doesn't look that good.' You watch it on a hi-def television, and it's old video, and it looks like VHS. They haven't remastered it yet, so it's great when they get back to a print and clean it up, give us a bunch of behind-the-scenes stuff. 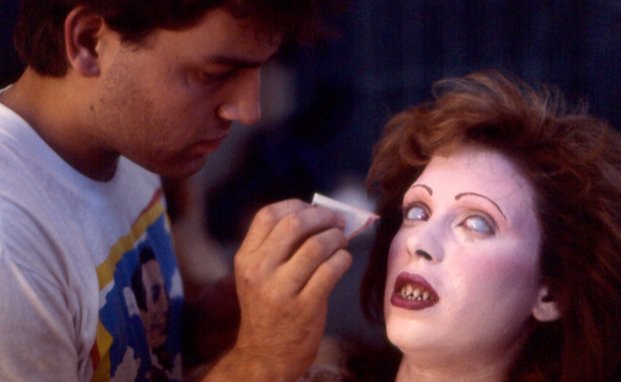 Don't roll your eyes at me: Robert Kurtzman working on the makeup for Denise Bixler as the demonically possessed Linda in Evil Dead 2 (Courtesy of Robert Kurtzman)

AC: You started your career in Ohio, you're back there now. Austin has a burgeoning effects scene, but up until recently there was a feeling you had to go to New York or L.A. to have a career.

RK: Back in the day, everybody migrated to L.A. Even the New York guys would come out to L.A. a lot, because the amount of work in L.A. was even greater than in New York. Over the years, it's changed. There's tax incentives in different states, so there's a need for effects artists there. But there's still a lot of shops in L.A., and because they do a lot of the prep on movies there, they're more accessible to the directors. They can go to the shop and see what's going on. But over the years, because of the Internet and being able to shoot video and keep directors in the loop, I don't think you necessarily need to be there anymore. I haven't been there in 12 years. I just build stuff, and go wherever we shoot.

AC: You recently managed one of the toughest tricks in effects. Good werewolves are really hard to do, but you managed it in Late Phases.

AC: I talked with Greg Nicotero a few years ago, and there was this point where everyone was terrified that CG was going to kill practical effects.

RK: That was pretty much when we saw the test footage from Jurassic Park, and we all freaked out.

AC: Luckily, it wasn't the knife in the heart of the industry everyone feared. Why do you think practicals have remained so durable, and studios didn't just go, screw it, we're going all CG?

RK: Some films have done that. But it's the ones that have some practical elements mixed in that I think the audience responds to better, because it's not just a big cartoon. The best makeup effects now are the ones that blend things in. There are certain things we just couldn't do. You can't take away from someone's face, but there are characters now you can do that with. You still have a practical component, and then the CG takes over. There's a great place for creating other worlds, and CG is important for doing that. But if you look at Lord of the Rings even, the first movies used a lot more practical miniatures than they did in The Hobbit. Same thing with some of the characters, the orcs and stuff, they're CG now but the originals were makeup. It depends on the filmmaker. There are certain filmmakers like Guillermo del Toro who use practical effects all the time and mix it.

AC: Greg was in town working on Predators, but you've got your own Austin history. You've worked regularly with Robert Rodriguez, and From Dusk Till Dawn was actually your story. With that now a TV series, how do you feel about its longevity?

RK: It's great. I just went to London for London Film and Comic Con last week, and I was doing Robert Englund's Freddy [Krueger] makeup, but I was at a signing and everyone kept bringing Dusk stuff over. It's really popular over there. It's been how many years now, but it's one of those things. They expect to see it every Halloween, and people watch it over and over again. I guess it's like Goodfellas for me or The Godfather. I can't shut it off. I've got to just leave it on. That's how Dusk is for a lot of horror fans.

Get Caught in a Webb
Highlights from Marc Webb's keynote address