DVDanger: What We Do in the Shadows

Hell, it is said, is other people. Purgatory, as posited by New Zealand vampire comedy What We Do in the Shadows, is an eternity with those same people, especially if they leave bloodstains in the carpet. 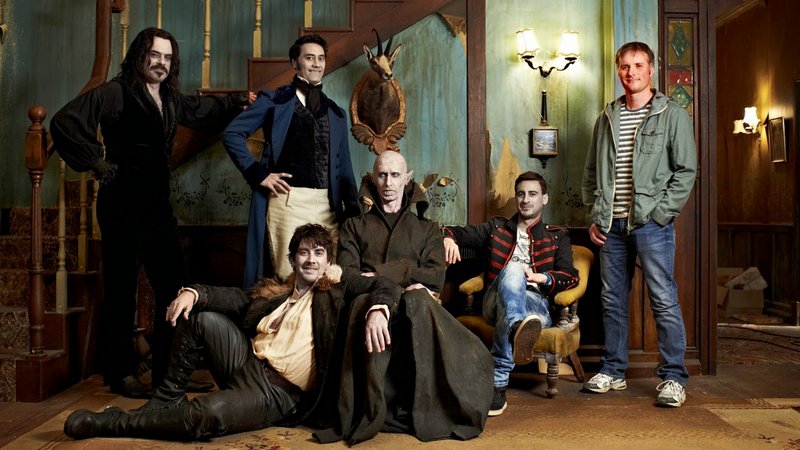 "Sometimes actors would suspect that it was their last day and think, 'oh, I'm going to die now.'" Jemaine Clements explains improvised bloodshed in new horror comedy What We Do in the Shadows.

The improvised mockumentary, which arrives on DVD and Blu-ray this week, transplants the classic monster of Central European nightmares to the unlikely new home of suburban Wellington. Documentarians follow the (after)lives of four vampires as they contend with the challenges of their unusual condition: finding victims, dealing with unruly familiars, getting into decent night clubs, dealing with annoying werewolves, and working out whose turn it is to deal with the five years' worth of dirty plates in the kitchen.

Owing as much of a debt to classic British flatsharing comedy The Young Ones as it does to Bram Stoker, it's a collaboration between Flight of the Conchords star Jemaine Clement and Oscar-nominated filmmaker Taika Waititi (Boy, Eagle vs. Shark). The pair were required to wear just about every hat on the set: co-stars, co-writers, co-directors. Yet they soon found that sharing one canvas director's chair is as tough as it sounds. "When we started, we both tried doing everything," Clement said. "Sometimes I'd give directions to the actors, and then Taika would, and sometimes it would be at odds with each other." Finally a rough division of labor was established. "Taika tended to anything technical, because he's directed films before, and I mostly talked to the actors."

There was an outline script serving as a backbone. However, Clement and Waititi decided to keep the story secret from the rest of the cast, to add to the unpredictability that both good comedy and the best horror need. Clement said, "We were the only ones who knew at any time what was going on. Sometimes actors would suspect that it was their last day and think, 'oh, I'm going to die now.' They wouldn't know if they'd be back tomorrow. Whatever would happen, would happen and then we'd tell them to come back."

The pair had originally entered the shadowy world of bloodsuckers in 2005 with a half-hour short, What We Do In the Shadows: Interviews With Some Vampires (included on the home release). In it, Viago (Waititi), Deacon (Jonny Brugh), and Vulvus the Abhorrent (Clement) are three old-school European bloodsuckers who have abandoned grand castles for the relative squalor of what Vulvis dismissively dubs "a flatting situation." Clement said, "We didn't have a script, really. … All we had was lists of questions we wanted to ask vampires, and then we'd go into town or hang around the house."

In 2012, they started shooting the feature-length version, with the three leads from the short reprising their roles. There were a couple of changes, not least that the characters had become more defined and individual. Each represented a cinematic vampiric archetype: Vulvus (now renamed Vladislav) evoked the brooding grumpiness of Francis Ford Coppola's Dracula; Viago carries himself with all the prim frippery of an Anne Rice extra, and Deacon hints of the punk selfishness of a Lost Boy. Plus, a fourth tenant had moved in to help split the rent. Petyr (Ben Fransham) is a cross between "between a grandparent and a pet and a vampire," said Clement. The least human of all the vampires, with his parchment skin, rictus grin, and protruding fangs, he's a clear homage to Max Schreck's pivotal performance as the rodent-like Nosferatu."It was a great addition," said Clement. "We just wanted something scarier, and we both liked Nosferatu. I know I've dressed as Nosferatu at a party when I was a student."

Even after rave reviews on the festival circuit and a solid run in New Zealand in 2014, this year What We Do became a surprise breakout hit in the US. Originally, it was supposed to receive a minimal bicoastal theatrical release before heading to home release. However, that's when Clement and Waititi took to Kickstarter. Instead of raising money to complete their film, they were looking for $400,000 to give their film a proper US release. Clement was stoic about its chances of hitting the all-or-nothing target ("Either it's released in America, or we're having a holiday") but the appeal actually broke the target by more than $46,000. Since then, he said, "It's built a cult audience, which depends on certain types of cinemas. … There's a Tower Theatre in Salt Lake City, and it was their longest running film in 10 years or something like that."

What We Do in the Shadows (Paramount) is out on DVD and Blu-ray today (read our full review here).

DVD Watch, DVDanger, Vampires, What We Do in the Shadows, Jemaine Clement