One in a Crowd Triple Play 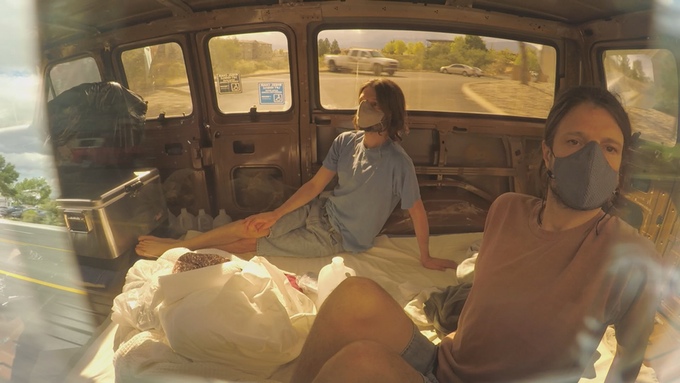 Searching for safe air to breathe in The Sensitives, one of three films from Austin filmmakers looking for crowdfunding this week.

It may seem like the world is winding down for the summer, but it's high season for independent productions in the ATX. Here are three films with an Austin connection that are down to the wire on the crowdfunding campaigns.

Monitor is the new horror short by Ryan Siller. Instead of found footage, he calls it a stolen-footage film, as a neighbor makes off with a nanny-cam that contains video of the supernatural fate that befell the family next door. To tell the tale, he's hoping to raise the ridiculously low sum of $250 by July 15. Why so little? Because Siller has already raised most of the money and collected just about all the resources he needs, but this will just get him over the top. Big perk: Backers will get access to the short ahead of everyone else. So if you want to help out, head over to the film's Kickstarter page, and find out more about the disappearances at www.monitorshort.com.

The folks over at In Development: Designing Indie Games have set a much more ambitious target to fund their documentary: $50,000 by July 17. Like Siller, they know exactly what they need to complete their examination of life behind the scenes in indie game development. They have already talked to staff at Apotheosis Studios (creators of tactical card game Raido), Descendent Studios, and local two-person studio Trouble Impact, creators of Color Thief (as featured at the Austin Chronicle and SXSW's Game On extravaganza last year), but there are more interviews and a lot more work to come. Check out their Kickstarter page.

There's a documentary on a much more serious issue also looking for some financial support. The Sensitives examines the mystery of Multiple Chemical Sensitivity. Probably best known as the affliction that strikes down Julianne Moore in Safe, MCS is basically an allergy to modern life, a general sickness brought on by exposure to the dozens of chemicals that have become ubiquitous, and that sometimes overpower their bodies. This is a controversial diagnosis, as many health organizations do not recognize it as an illness. However, for the people who feel that this is the root cause of the constant ailments, inflammations, and reactions that plague their lives, it is real enough.

Director Drew Xanthopoulos is almost halfway to his $50,000 goal, but the campaign wraps up on July 15, so if you're feeling philanthropic, head over to the movie's Kickstarter page to get him the rest of the way there.

One in a Crowd, crowdfunding, Kickstart Your Weekend, In Development: Designing Indie Games, Monitor, The Sensitives