Nobody ever claimed Arnold Schwarzenegger is a great actor. Sure, sometimes he's pushed his personal envelope, but he's wisely avoided leaving his comfort zones. So as Terminator: Genysis clogs up multiplexes, who would expect him to star in a heartbreaking meditation on assisted suicide?

That's exactly what his latest film is. For while Maggie might look at first glimpse like an arty zombie movie, it's really about unimaginable loss. 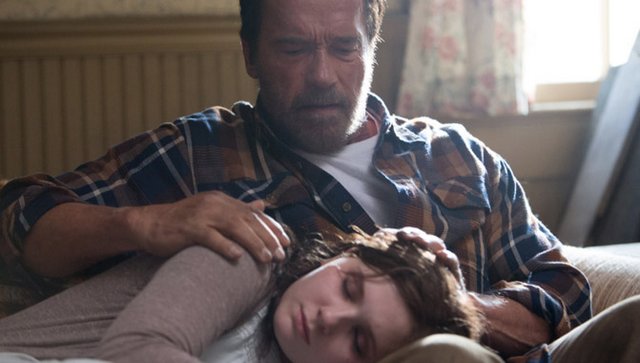 The unstoppable force pushes against the void: Arnold Schwarzenegger faces the loss of Abigail Breslin in Maggie, out today on DVD and Blu-ray.

The script by John Scott 3 made the legendary Black List of brilliant works that, due to the mercurial ways of the film industry, gather dust. Previous such unloved projects include The Imitation Game and Buried, and it usually takes a household name like Benedict Cumberbatch or Ryan Reynolds being attached to get these passion projects started. In this case, that name is Schwarzenegger, and while his name is above the title, it's as much Abigail Breslin's film as it is his. She plays Maggie, a typical 17-year-old Midwesterner. She has friends and boyfriends and amibitions of college. But none of that will go on. She has been bitten by someone infected with what is known as the Necroambulist virus, and in around six weeks, she will become a mindless killing machine. Until then, she gets to go home and spend her last few weeks with her father Wade (Arnie himself), his second wife Caroline (Joely Richardson) and her half-siblings.

Maggie works because Scott's script puts her inner life first, ahead of the horror. In fact, there really isn't that much horror here. This is the end of the zombie apocalypse averted. Yes, society almost crumbled, but now the disease is contained. Yet it's definitely not cured, and Maggie's infection is a death sentence.

The story of zombieism as a slow onset disease is not new, and three decades ago this would have been an AIDS metaphor (also see, if you can, the terribly underrated Harold's Going Stiff, which rewrites the walking dead as suffering a profound form of Alzheimer's). So Maggie isn't becoming a monster. She's a sweet, smart kid who can feel who she is slipping away. Breslin has already proven with Haunter that she can keep high-concept fantasy grounded, and her performance here will be rough to watch for anyone that has seen a teenager go face-to-face with a lingering death. She balances the fury and the sadness and the weakness and the urge to just crawl back into childhood, even as she knows the terrible, inevitable path down which she is being dragged.

Director Henry Hobson creates a suitably dire world in which she spends her last days. He has already helped establish some seminal zombie iconography, since he can include the opening credits of The Walking Dead on his resume as an established credit designer. In his directorial debut, he draws the world in ashen grays, as the countryside is subsumed in the charred remnants of burned corpses and burned crops.

And what of Schwarzenegger? The Austrian Oak built his film career in phases: first, the photogenic mass of muscles (The Terminator, Conan the Barbarian; smirking leading man (True Lies, Total Recall); then the fish-out-of-water comedy sidekick (Twins, Junior, Jingle All the Way). He's clearly had the urges to do something a little more complicated, but the sadly overlooked meta-actioneer The Last Action Hero almost snuffed out his supernova-level stardom. Since his return to acting after his political career, he's seemed a little hungrier for change. Flawed as they were, The Last Stand and Sabotage took his old lantern-jawed hero role and added a little darkness and world weariness.

But Wade's in denial as much as the audience is. He knows he can't punch the infection. He can't see it off with a goofy one-liner. We see him dispatch zombies with physical ease, but with undoubted moral qualms. Yet this is his daughter dying, and as the local doctor tells him, he has three real options: send her into what is basically a holding pen for the infected, where she will become a shambling shell of a human; use a state-provided drug to put her down; or make it quick, and painless.

Maggie burns and twists into the audience because it's never about "how can he save her?" It's about "will he make the tough decision in time?" He has other children, he has a wife. But he has known loss. This is a father's most agonizing challenge, and Schwarzenegger catches this. It's a full-blown performance of the kind that, at best, we've seen glimpses of. If nothing else, it's heartwarming to see him in the DVD extras talking about how wonderful it was for him to spend prep time working on character motivation, not just stunt set-ups.

In a fair world, it would have been Maggie opening wide last weekend, and not the latest slab of high budget Terminator fan fiction. Instead, it sneaks out on home release, where it will find a new life with similarly challenging and tragic undead fare like Dead Weight and The Day. As Maggie points out, life isn't fair. Even for the best film Arnie's done in years.

Maggie (Lionsgate) is out on DVD, Blu-ray, and VOD today.