Drowning in Mystery on The Midnight Swim

What scares Sarah Adina Smith? It's not jump scares or gore. It's films like Australian metaphysical mystery Picnic at Hanging Rock, where the characters are engulfed by the wilderness. She said, "What is terrifying is the existential crisis the movie puts off." 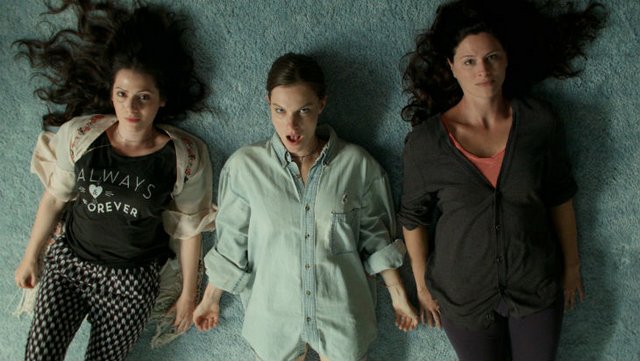 Aleksa Palladino, Lindsay Burdge, and Jennifer Lafleur hold hands and drag each other down in The Midnight Swim, receiving its Austin premiere this week.

Her debut feature, the equally enigmatic The Midnight Swim, receives its Austin debut as part of Other Worlds Austin's year-round programming. However, local audiences will be familiar with many of its cast. It follows the three Brooks sisters – Isa (Aleksa Palladino, Boardwalk Empire, Manny & Lo), Annie (Jennifer Lafleur, The Do-Deca-Pentathlon), and June (Lindsay Burdge, a SXSW regular with A Teacher and The Invitation, and an Austin Film Festival veteran with another supernaturally tinged family drama, The Sideways Light) – through a tale of mystery and loss. They gather at the family home on Spirit Lake with family friends including Josh (Ross Partridge, Baghead), to mourn their mother (Beth Grant), who disappeared while diving the murky waters. But is she dead, or merely gone?

At the heart of The Midnight Swim is the myth of Spirit Lake: that seven sisters drowned as each tried to save the other. That was actually a fable that Smith's own mother used to tell her. As the third of four siblings, it presented an almost impossible quandary for her. She said, "If someone you love is drowning, you have to jump in and save them. So it's this really interesting moral dilemma, of when to let go and when to hang on."

Smith's first feature revisits themes from her 2009 short "The Sirens," in which two sisters take their sister to a lake for a different, if equally tragic, farewell. "I'm drawn to stories about grief, for some reason," said Smith, "stories about not being able to let go." In the Brooks family, Isa and Annie see the visit to the lake as a way to say farewell to their mother. Not so June. "June does not want to let go," said Smith.

It's June's camera that catches all the moments between the family, but Smith describes it as "the buffer between her and the world." However, it also became an important narrative tool. She said, "When you're making a film about a mentally ill character, it's really hard for the audience to sympathize or empathize." By seeing everything from June's point of view, Smith hopes she can force the audience out of their "white scientific coat. I wanted to go, no no, no, we are the subject. ... My hope was that the audience started to lose themselves in June's brain."

Smith is quick to point out that this is not a found-footage movie. Not that she has a problem with the format, noting the upcoming Creep as "a really cool use of found footage to illustrate character." However, she said, "There was an over-saturation of found footage because people thought they could get away with cheaper, haphazard filmmaking, but I think there's still a lot more legitimate storytelling to be done." She describes The Midnight Swim as POV storytelling, "although my publicist Ted likes the term faux-documentary. It's not a mock documentary, tongue in cheek, but it's using the trappings of the documentary."

That subverts a misapprehension about found footage, that it just catches the moment, with no filter. Somewhere, someone is filming and assembling the material: In this case, it's June, and she is as unreliable as any narrator. Smith said, "Someone's showing you what to look at and what not to look at, and I think that's what POV filmmaking points to." In The Midnight Swim, June is as much writing the narrative of her relationship with her sisters as she is capturing it. "We only see what June decides to capture with her camera, so we don't see all the conversations in their lifetime or even in those few days."

It also means that Burdge spends most of the film behind the lens. Yet, as Smith noted, that doesn't mean she wasn't still performing. She said, "It's a different kind of way of shaping a character. I know there's a lot of actresses who wouldn't want to take this character, knowing that they would be on camera so little."

Fittingly, her visual inspiration was Albert and David Maysles' cinematography for their groundbreaking 1975 documentary Grey Gardens. Smith said, "When I would block a scene in a room, I wanted it to feel like we were inhabiting a room like June. OK, where's June standing, what's she thinking? I tried my best to listen to Lindsey, because the camera is the character."

That perspective comes to a peak during one key scene, in which the sisters and Josh go into the women's mother's room to talk about her. "It's the first time they're really grieving," Smith said. She talked to the actresses individually about what they felt their character's relationship with their mother was Smith said, "You can be raised in exactly the same household, but every sibling in a way gets different versions of their parents, and I let the girls shape the context for themselves." However, she credits Partridge for adding a vital sense of reverence and significance to the scene. She said, "He lost his mother not too long ago, and he made such a great point to me. … He said, 'That's mother's room. They wouldn't just go in there to hang out. Going in there means something.'"

For all the raw emotions and the technical challenges of her debut, Smith said, "What is strange about the making of this movie is that it was oddly effortless. I turned to [producer Jonako Donley] and said, 'shouldn't something be going wrong by now?'" To make up for that, she said, "My next movie's going to be pure hell."

She's already preparing that next project, centering around a man "working the night shift in a terrible corporate hotel. The way that the lake in The Midnight Swim is a huge character, in my next movie it's a mountain." So while the location and the topic may change, she still feels drawn to the enigma of the great outdoors. She said, "Nothing I can ever create, nothing in my entire life, can ever be as complicated and interesting as the tiniest drop of lake water, and I think that's so humbling and freeing in a way."