The best and the rest of the month's home releases

Occasionally, a horror film comes along that jolts the genre. In 2010, that was Gareth Edwards' microbudget and revalatory Monsters. Inevitably, there would be a sequel.

Oddly Monsters: Dark Continent follows more in the footsteps of another quietly revolutionary creature franchise, the Ford Brothers' The Dead. For The Dead 2, they changed everything: Different time, different characters, different location. With writer/director Tom Green replacing Edwards behind the lens, the action moves from hipsters in Mexico, evading giant creatures, to soldiers in the Middle East. Now the monsters have spread across the globe, and the U.S. military is set on wiping them out through raw firepower.

The aliens are no invaders, but an invasive species. Like rabbits in Australia, or rats on Mauritius, the task is mass eradication. The only problem there is that, when you carpet bomb a herd of these leviathans, there is collateral damage. Meaning, dead locals. Ground patrols are sent on an old school hearts and minds campaign (if you can't change their minds, rip out their hearts) and it's going about as well as can be expected. That is, poorly.

The narrative initially focuses on a squad from blue collar Detroit, but swiftly re-centers around the most innocent of the Michigan killing crew, Parkes (Sam Keeley) and battle-hardened Sergeant Frater (Johnny Harris). While Parkes is the typical military ingenue, Frater is the ultimate synthesis of the warrior who knows nothing beyond his war: the bloodlust of Tom Berenger in Platoon, Gene Evan's survivalist nihilism from The Steel Helmet, and the increasingly desperate dedication to duty shown by Alec Guinness in Tunes of Glory.

This is not a conventional war movie, nor is it a straightforward creature feature. If you want a brief insight into what's wrong with film audiences, try reading the Amazon customer reviews for this film: a galaxy of one-star assaults, all beating the same war drum. "This is an anti-war movie, where are all the monsters, I feel lied to, blah blah blah."

Yes, it's anti-war, but still his is a welcome change from such pointedly on-the-nose fare as Jarhead. Green not quite evoke Edward's dreamlike visual poetry. However, he catches the violent randomness of firefights, while still catching Edwards' sense of cosmic isolation for a complicated and metaphorical discussion about the meaning of war.

As for the monsters being in the background, well, that's what the franchise is built around. They touch on the Lovecraftian concept that the affairs of humans are so beneath the concerns of the Outer Gods that they are as ants to them. This makes them, as in the first film, a Maguffin. They are the reason the troops are there, but the real plot, the real drama, is in dealing with the rest of the problems – the internal strife, the terror, the fear in the eyes of the locals – with which they contend.

Monsters: Dark Continent is clearly set in a universe where, if there is a deity, it is a god whose attentions one would best avoid. Spanish supernatural horror Asmodexia is conventional Christian good versus diabolical bad. Eloy (Lluís Marco) and his granddaughter Alba (Clàudia Pons) are itinerant exorcists, wandering the countryside around Barcelona. The question is whether they're fighting evil, or enabling it.

Director Marc Carreté creates a febrile horror reminiscent of the best of DC's Hellblazer comic, minus John Constantine's sardonic humor. Eloy and Alba have a touch of darkness around them, and it often seems that they are using one demonic force to push another out. The scattershot narrative as they bounce from one supernatural encounter to another, interacting with other cultists and old acquaintances, shares structural problems with the jauntier Hellbenders. That's exacerbated by multiple plot threads, as characters accrete, and a police detective (Marta Belmonte) with her own connection to the pair tracks them down.

However, Carreté's sense of grubby style compliments cinematographer Xavi Garriga's washed-out and greasy palette. That's effective, as Eloy and Alba find themselves drawn to a psychiatric hospital, where the possessed are treated as mental patients (or potentially vice versa). That helps gloss over the jumble of Mayan calendar mysticism and unstructured ramblings about the resurrection. 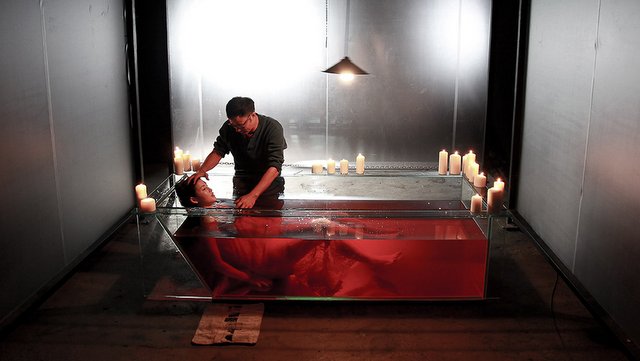 Is it still assisted suicide if it's involuntary? Sinister manipulations in Cross.

There's a further dose of Catholic horror in Hong Kong drama Cross (aka 6th Commandment Cross). It starts intriguingly enough: a simple piano melody, interrupted by discordant flashes of strings. It quickly drops into an old trope: A man called Leonard (veteran Hong Kong actor Simon Yam) walks into a police station, and admits he is a serial killer. He even has a big file to prove that he did it. He has an explanation, if not exactly a defense: he was only killing people who wanted to commit suicide, saving them from damnation.

But what if they weren't actually suicidal?

That's a shame, because Yam gives the killer a tragic depth beyond the usual 'wounded child' excuses such films make for their monsters. Instead, he's a bloodsoaked dupe in other people's equally warped machinations. 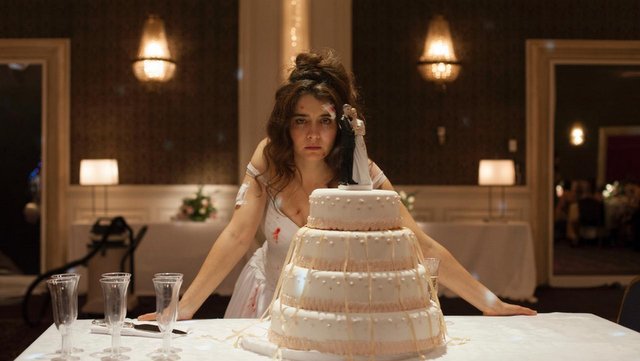 Who wants cake? No limits to revenge in anthology Wild Tales.

Speaking of morality tales, Spanish-Argentinian anthology Wild Tales bears a more than passing similarity to Tales of the Unexpected, Roald Dahl's three volumes of perversely pleasing morality tales. The author of The Witches and Charlie and the Chocolate Factory had a delightfully low opinion of people, and it's seemingly shared by Damián Szifron, who wrote and directed this as a break from developing a massive sci-fi project. Each of the six unrelated short segments puts its characters in a position to make a terribly bad decision. Of course, each of them embraces that worst possible timeline, to varying results for them, and deliciously pleasing ones for the audience.

Szifron understands that a short can eschew lessons learned in favor of a tougher morality, and leave the audience more uncomfortable than they necessarily will accept in a feature. "La Propuesta" ("The Proposal") is near-sociopathic in its depiction of a family and the authorities coming together to cover up a double homicide, but its resolution is astoundingly bleak. By contrast, closer "Hasta que la muerte nos separe" ("Until Death Do Us Part") shines as an oddly romantic take on wedded bliss, with Érica Rivas blazing as a bride shunned. 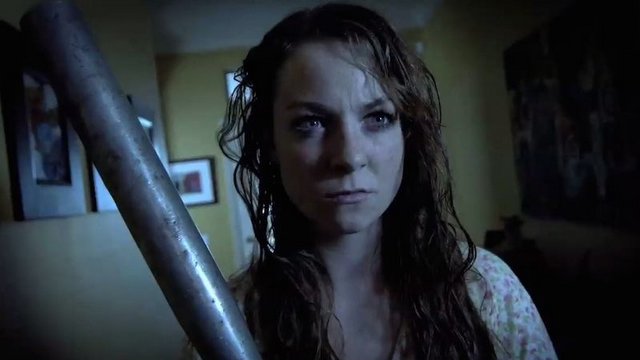 The Poltergeist of Borley Forest gets lost somewhere between England and Florida.

By contrast, by-the-numbers low-budget horror The Poltergeist of Borley Forest is another riff on the classic trope of ghosts pestering teenage girls. Renamed from You Will Love Me to reference Borley Rectory (according to legend, the most haunted place in Britain), it transfers the spooky activities to Tampa Bay. Paige Pritchard (Marina Petrano) is the standard teen with the standard issues, pursued by a monstrous spirit with family issues. It doesn't have the lightning in a bottle verve of breakout success It Follows, but its definitely caught some pretty bright fireflies in its mason jar. Pertrano has a low-key feisty charm as the plagued Paige, while Chris Ingle clearly relishes the part of her exasperated brother Tommy.

Unfortunately, some low production values, uneven supporting performances that flit from cartoonish to barely conscious, and a sluggardly edit, drag it down. That said, a gung-ho optimism pervades the DIY production, and gives it a little more spirit than a lot of similar rack 'em, stack 'em productions. 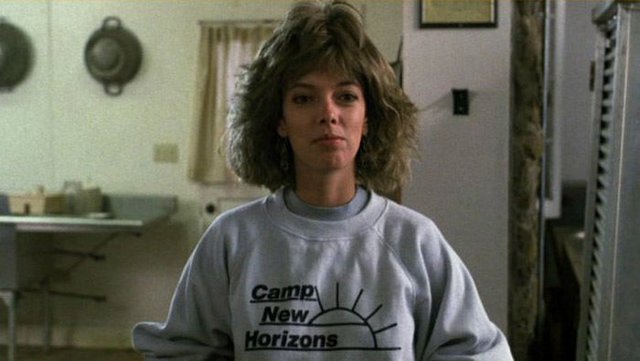 Mild-mannered camp survivor Angela (Pamela Springsteen, replacing Felissa Rose) walked out of the original's now-legendary end as a catatonic mess. Now she's back in the worst possible job: camp counselor. Minor infractions will not be tolerated, as she bludgeons, slices and … whatever the term is for killing someone with an outhouse full of leeches is.

It took Freddie Krueger a few movies to become a joke-spouting pastiche of himself. Sleepaway Camp hits that silly stride in the first sequel. The producers embrace its second-tier meta-slasher weirdness, so much so that series creator Robert Hiltzik disowned it (see "DVDanger: Robert Hiltzik on Sleepaway Camp"). Replacement director Michael A. Simpson throws in more mandatory post-Porkies camp movie toplessness, plus overt fourth-wall busting nods as two doomed young hooligans dressed as Freddie and Jason come to a grisly end at the hands of Angela in full-blown Leatherface mode.

Part III gets sillier, with Angela returning to Rolling Hills (now renamed New Horizons) hiding under a bad wig. This time, Simpson throws in some rich kid/poor kid rivalries for fake social commentary, but it's just cheesy. III is an apt sequel to II, but John Waters did it better less than a decade later in Serial Mom.

Asmodexia (IFC Midnight) and The Poltergeist of Borley Forest (Image Entertainment) are available on DVD now.