Locally made card/drawing game offers respite from the heat

The time for bracing has passed. Summer has come. It’s time to take the party (and probably a box of Flavor Ice) out of the sun and into the AC. But don’t fret! Local game studio, White Whale, has the perfect way to wait out the next six months: their new card game, Monstrocards. Last Saturday, White Whale (who previously published the mobile game God of Blades), featured their new card game, Monstrocards, at Dragon’s Lair Comics & Fantasy. Game designer, George Royer, and producer, Jo Lammert, hosted rounds of their all-ages party game starting around 1pm. Fun was had by all. Sunburns were suffered by none.

Overall, the game has three mains phases: developing drawing prompts, drawing the monsters from those prompts, and then battling the monsters for points. First, players take turns laying down cards from two decks — a deck of modifiers and a deck of nouns. Each player lays down a series of each, pairing a noun card with an adjective card. The first round ends with a row of modified nouns that serve as drawing prompts in the second phase. (For example, in Saturday’s games we got “stinky boyfriend,” “your dad’s ghost,” and “million-dollar cat.”) In the second round, players have a few minutes to draw the adjective/noun pairings – their monsters – onto their Monstrocards. They keep their drawings to themselves as the pictures serve as their decks during the third phase: battle. During battle, players take turns pitting their monsters against one another – generally arguing (possibly chaotically) over who should win. The players not in a direct battle vote on the winner, who then receives a point for the victory. After all the players battle all their monsters, the round ends, and the person with the most points wins.

Play unfolds like a combination of Pictionary and Apples to Apples, with mostly G-rated cards. But there are wild cards that allow players to choose drawing prompts, and players are free to interpret prompts however they like. Depending on who you’re playing with, that means a game could turn from a tone like that of Apples to Apples towards a saltier round of Cards Against Humanity. But there are definitely no “bigger” or “blacker” Monstrocard prompts. So any “butt stuff” cards are on you. (Sicko.)

All of Saturday’s drawings turned out downright charming. And while it’s not, by definition, a cooperative game, it sure feels like one. That’s by design. “The game's energy comes from the fun of throwing around ideas and seeing how they pair with the things your friends have made,” says Royer. “It's a positive game designed to show people that, yes, you can draw, and, yes, you can be hilarious. At the end of a round you're left with all these treasures that your friends have made, and it’s fun to look at them later. So there is a kind of persistence to it.”

If you missed Saturday’s demo, you can download a free kit complete with printable cards on 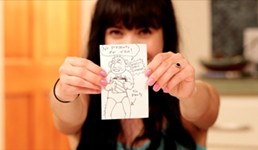 One in a Crowd: Gaming Edition
Three games, all worthy of the crowd’s funds