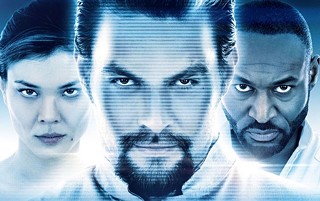 Some people climb mountains. Some people run rapids. David Hewlett makes films. He explained, "It is the most frustrating, terrifying, soul-destroying process, but it's such an adrenaline rush."

When he talks about his latest movie, space-bound cyberthriller Debug, the Canadian actor-turned-filmmaker calls it "my little love letter to trashy science fiction." It also isn't quite the movie he originally intended. "I wanted to do 2001 from Hal's perspective. What it finally ended up being was Final Destination in space."

The DNA of the original script is still deep in the code of the finished film, and if that sounds like a mixed metaphor, it's not. Debug stars Jason Momoa (Game of Thrones, the upcoming Aquaman) as IAM, a sentient program on an abandoned spaceship, murdering the humans sent to clear the system.

But is he really evil? Hewlett argues that, even if he isn't exactly the good guy, he's at least got a point. After all, he's really just defending his right to exist. Hewlett said, "This thing has been through hell and it's seen the worst of humanity at work. That's enough to turn anyone off people."

It all goes back to watching 2001: A Space Odyssey as a kid. "I said, I don't understand why people see the computer as a the bad guy." If this were a Western, he argued, then Hal would be the old timer on his porch, watching the young interlopers try to take his land. "It would be Clint Eastwood fighting off the gangs in Gran Torino. But because everyone is so afraid of technology, Debug became about the perils of technology."

Best known as Dr. McKay in the Stargate franchise, Hewlett has spent much of his career working on genre projects. There were also two human inspirations for Debug. First was Hewlett's longtime friend, Vincenzo Natali (Splice, Haunters), who he has known since before they worked together on the gruesome sci-fi thriller Cube. Hewlett admits that "that whole first scene is basically my ode to Cube. That said, he added, "Vincenzo's a little more paranoid about technology. I'm a lot faster to embrace it, and I think he's only just got on Twitter."

The second key component was Momoa. Hewlett called him "a very passionate artist," admitting that "he saved us. We didn't have a lead, and I gave him a call as one of those people we would never get, and he did us a huge favor." While many know him best as doomed barbarian Khal Drogo, or as the eponymous Conan the Barbarian, Hewlett is a huge booster for his overlooked directorial work on 2014 biker road movie Road to Paloma. "There's a fire that I see in Jason," he said. "There's something mad about him."

Not that you'd quickly catch Hewlett on a hog. He said, "I suck as a driver. I believe all cars should be piloted and driven by machines." For the number of times the automated automobile might go awry, he argues, "Look at the number of times people will randomly plow into market places because they shouldn't be driving."

Make no mistake, Hewlett is far from a technophobe. His next film is actually a documentary about medical technology, and how it is changing the idea of disability. He said, "I was watching an interview with this guy who had lost a leg, and now he wants to get rid of the other one because the bionic leg is so much better."

In order to make what seems like a slasher movie in space, he was reading books on molecular biology, and he hopes Debug's audiences will still find some traces of that work. "There were huge concessions I had to make in the film. If I had made my film, then it would probably be a hugely pretentious art piece." But what remains – and what really fascinates him – is rampant technophobia. In the case of Debug, it's not the machine part of IAM that makes him a menace. It's the biological, the animal, the exposure to the human monsters locked in his ship's cells, that make him a menace. Hewlett said, "Silicon isn't evil, but biological entities can be. People talk about drones like they're a bad thing, but they forget there are people behind them." He laughs. "It's a lot easier to blame the technology than to accept that people are a cancer on this planet"

Reconcieving his script as a slasher actually keys into a core trope of the genre – that the killer often has some weird, twisted moral authority. In the original Friday the 13th, Mrs. Voerhees wanted revenge on the people that let her son drown. Cropsey in The Burning was mutilated by selfish teens. Even the genocidal robotic ubervillain of The Avengers: Age of Ultron lurks in murky moral waters: "He said we must get rid of humans because they're the problem, and I have to say, he's got a point," Hewlett said. "I could make a career looking at the sympathetic side of all these horror characters."

Debug is out on DVD and Blu-ray now.